In the rolling hills of Eastern Pennsylvania, the story of modern love has been written over and over again. For nearly two decades, the resorts nestled in the Poconos Mountains made this region the “Honeymoon Capital of the World.” Today, it is a landscape dotted with abandoned resorts.

The Rise of the Pocono Mountain Resorts

Pennsylvania’s rise as a resort destination began generations ago. In the years after the Civil War, people would travel by train from New York, Philadelphia, Boston and Washington, D.C. to experience the rugged wilderness in Pennsylvania. Resorts popped up along the Delaware River and in the mountains to the west. 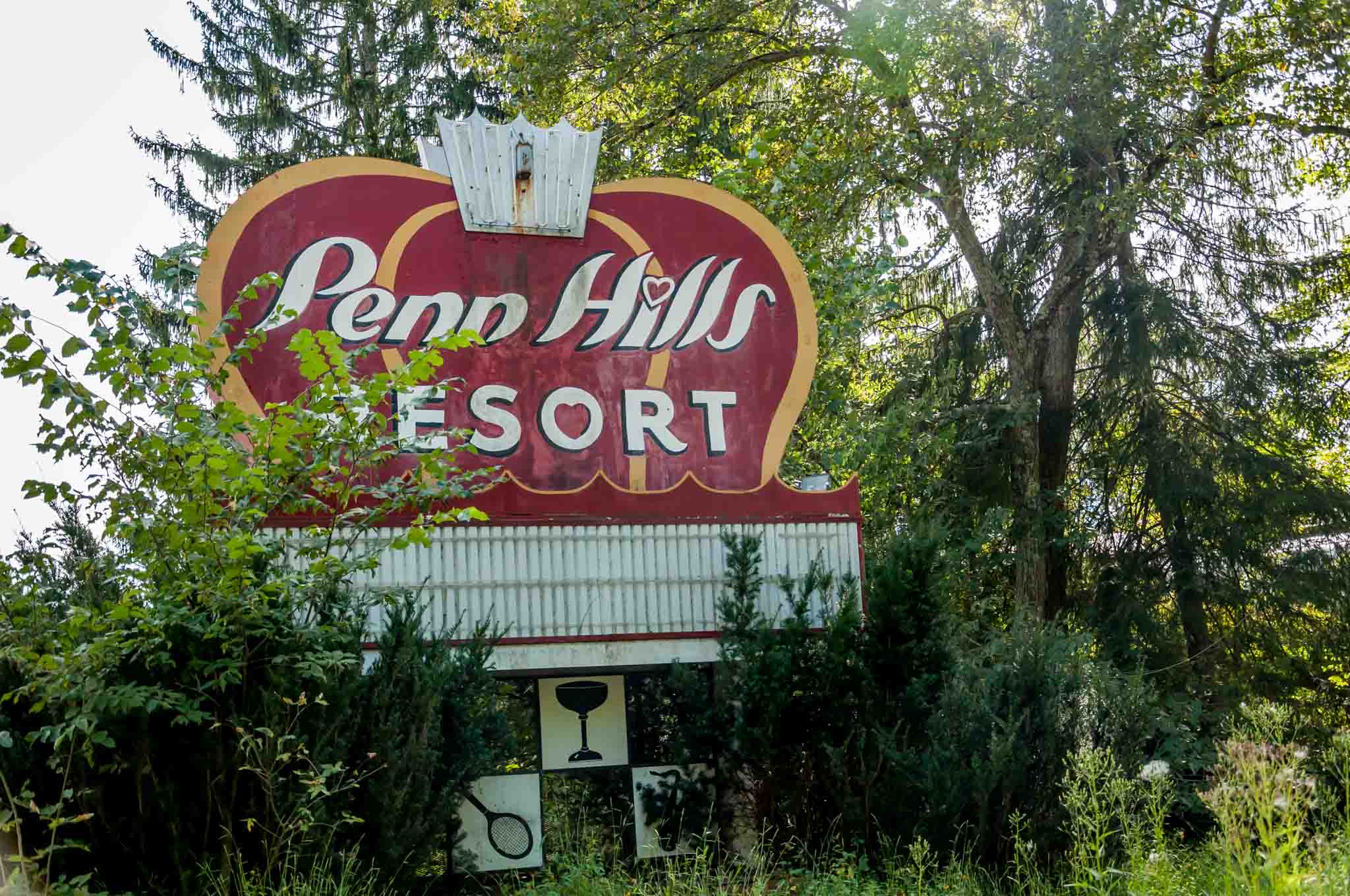 A few of these resorts remain (namely the three Cove Haven Entertainment Properties of Cove Haven Resort, Paradise Stream Resort, and the Pocono Palace Resort). While these ‘love shacks’ or ‘love hotels’ provided an obvious opportunity to leave ones bodily fluids behind in rooms of questionable cleanliness, these amenities proved alluring for many. And the “Honeymoon Capital of the World” was born. 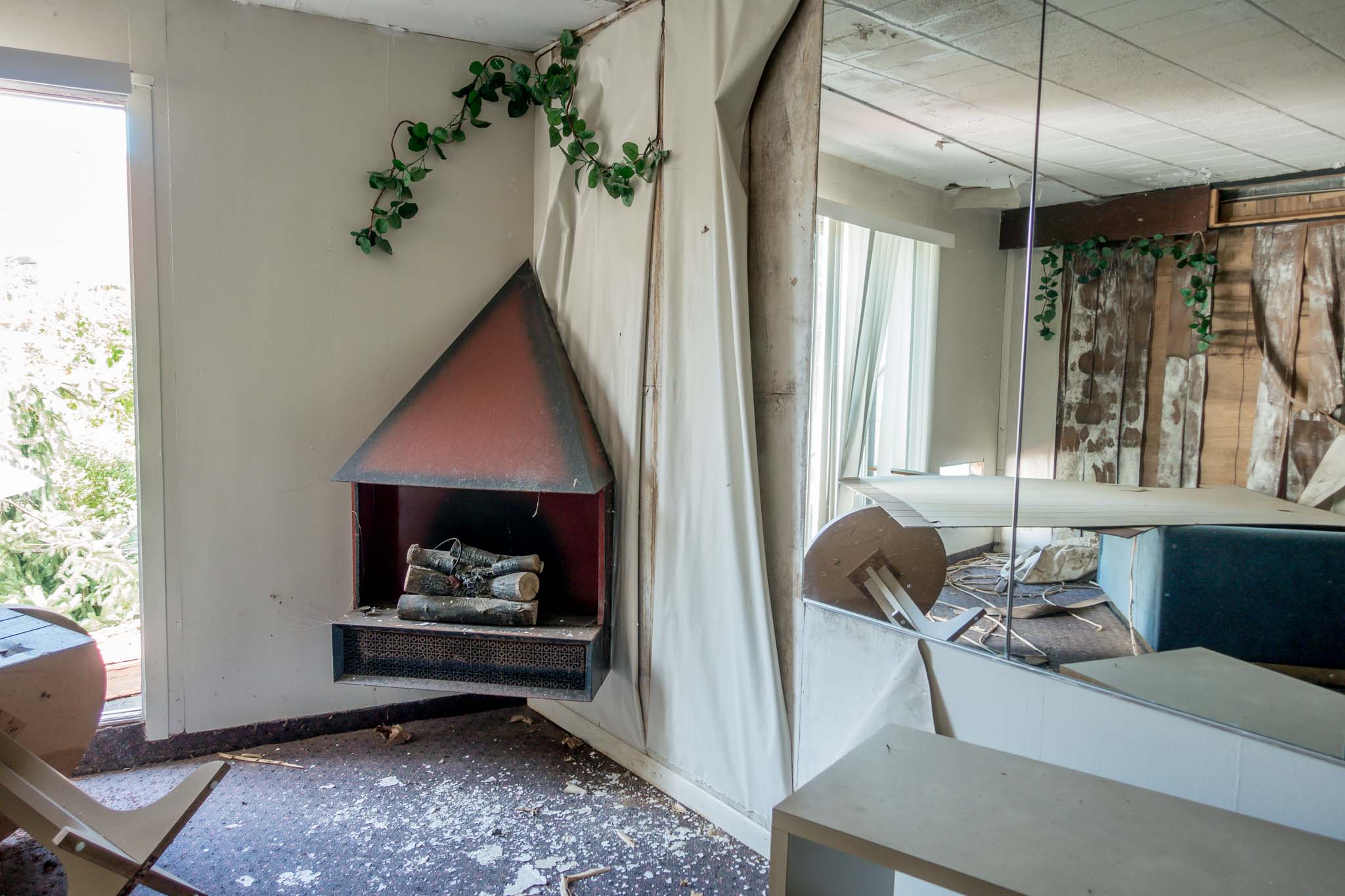 What happened to the Poconos Resorts?

But in the late 1990s and early 2000s, things changed. Many of the old resorts started going downhill. Single-family proprietors faced the mortality of the owners. Upkeep costs exceeded revenue from declining bookings. In some instances the owners were filled with hubris and didn’t think things could change. In other instances, efforts to modernize were blocked by antiquated laws and a strong resistance from both the state and county governments to see the region succeed (arguably some of that had to do with shifting political demographics in the state). Newer resorts were built in the region and in neighboring states. And visitors began looking for something different and more contemporary.

There are still many resorts in the Poconos that draw big crowds, but they are different now. There’s a lavish spa destination that caters to the affluent as well as a number of indoor water park resorts geared to families. But the abandoned resorts of the Poconos Mountains are truly a sight to behold. There are pictures all over the Internet of them and from the first time I saw the photos, I knew this was a place with a story. 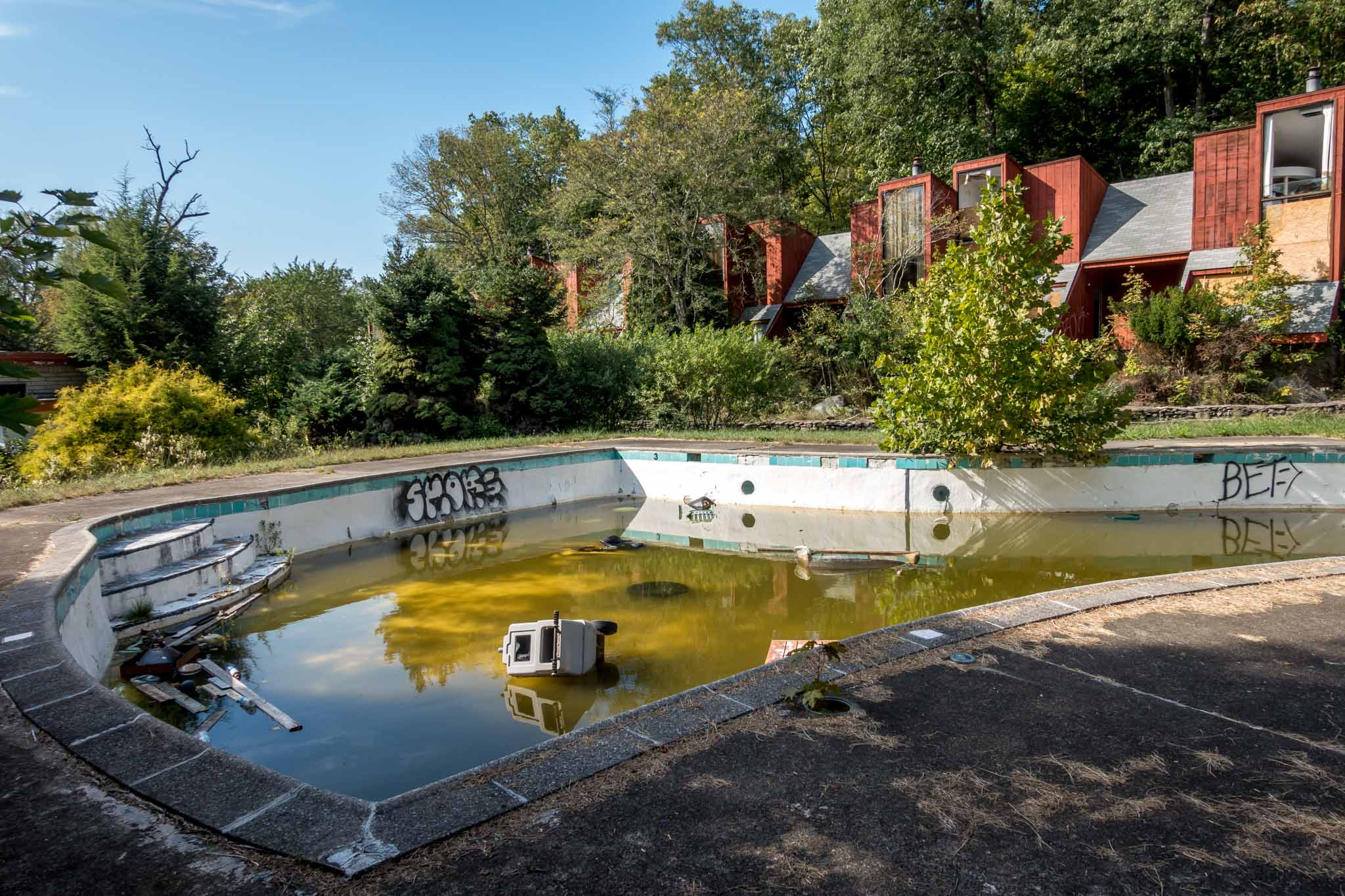 A lot can be made of these old abandoned Pocono resorts. There’s the metaphor of how these crumbling resorts represent how the majority of marriages now end in divorce – a visual representation of the human turmoil. There are also lessons about change – sometimes you need extinction to evolve. But there are also lessons about nostalgia and attachment to the past. There is a sentimentality about these places. We love the thrill of the new, yet draw comfort from the familiarity of the past.

A Return to the Poconos Honeymoon Resorts

On a bright September day, several years after the Penn Hills Resort closed and began to be swallowed up by the forest, a couple showed up by the side of the highway to see what had become of the place. Now in their 60s, they had honeymooned at Penn Hills in the Poconos almost 40 years ago. Returning to the abandoned honeymoon resort of their past, the years of decay and decline did not diminish the importance of the place, or its beauty in their eyes.

They reminisced about steak dinners, rounds of golf, lounging by the pool, and even recalled the name of their favorite staff member: Julie. Seeing them, overhearing their conversation, and then briefly talking to them, my thinking changed. These abandoned Poconos hotels are not dinosaurs that are being forgotten by time, they are being honored as nostalgia tourism takes hold.

For couples who honeymooned here, the old Pocono resorts are an incredibly important part of their past, regardless of their present state. Yes, most of these once-majestic properties are now permanently gone (see below for update on each property). These visitors will continue to return to the mountains that were so important in their lives.

“You think kids want to come with their parents and take fox-trot lessons? Trips to Europe, that’s what the kids want. Twenty-two countries in three days. It feels like it’s all slipping away.” – Quote from the movie Dirty Dancing (I was reminded of this quote as I looked out at an old abandoned Poconos resort) 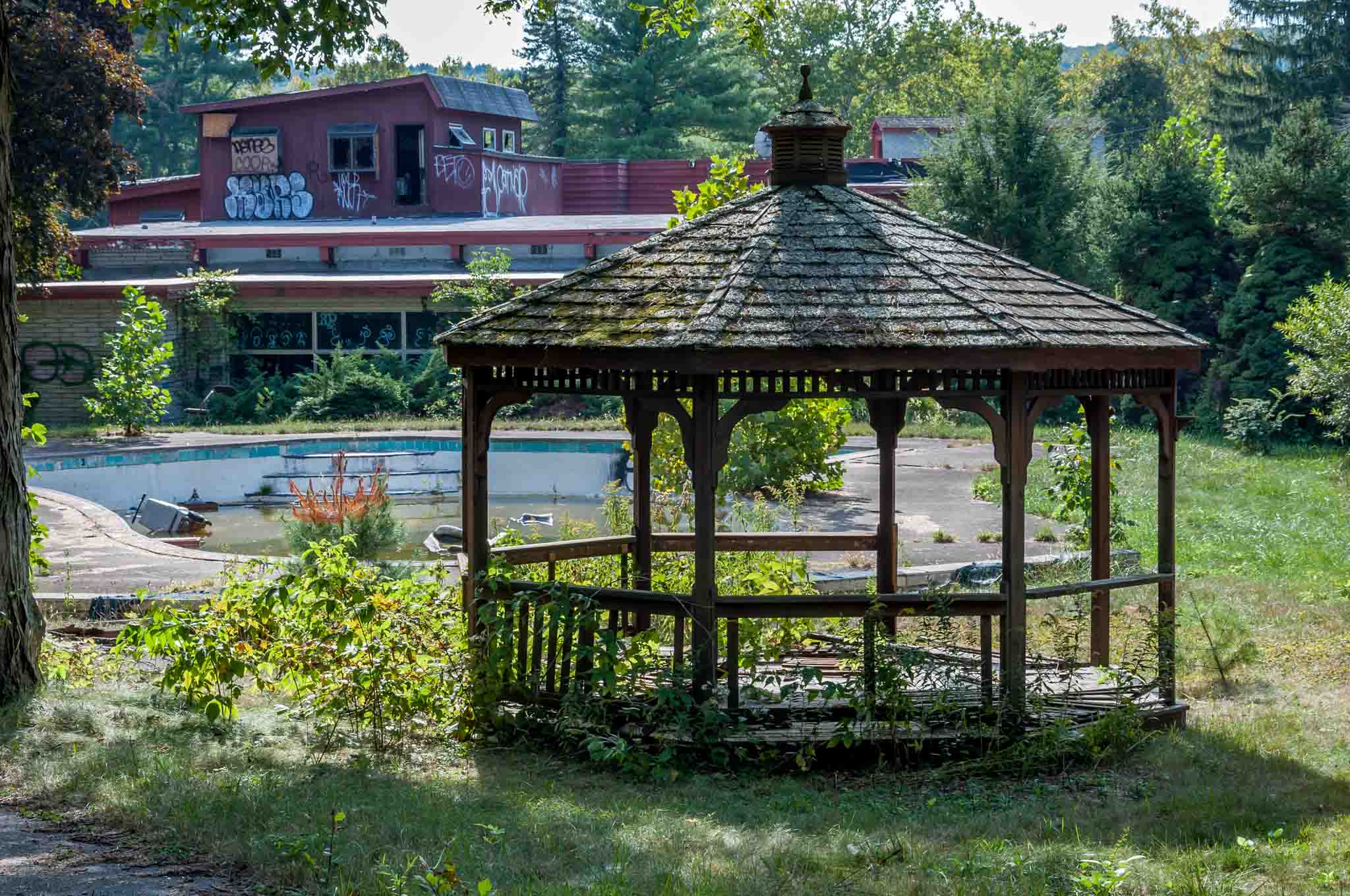 The Abandoned Resorts in the Poconos Mountains

Address: Analomink Road, Rtes. 191 and 447, Analomink, PA 18320
Note: The Penn Hills Resort actually straddles a State Highway, so it can be viewed from the roadway.

The Inn at Buck Hill Falls

Address: Lenape Lane & 35 Falls Drive, Mountainhome, PA 18342
Note: The Inn at Buck Hill Falls towers over Lenape Lane (just off Golf Drive), but the Inn can be seen from the road. Since being featured in the MTV show Fear, trespassing has become a significant problem and a private security firm is employed to keep people off the property.
Update: In January 2017, demolition of the Inn at Buck Hill Falls began. The local community raised over $2.5 million to have the historic structure demolished. The land is supposed to be converted to open space, but will likely be redeveloped.

Note: Please be aware that all the abandoned resorts are on private property. It is illegal to visit these resorts without the owner’s permission. Many of these resorts were once accessible via public roadways, so you can see part of them from public property.

What Happened to the Poconos Honeymoon Hotels and Resorts

Over the years, couples have been coming to these mountains for their honeymoons in the Poconos. Here is an update on what happened to each of the Pocono resorts for couples.

Unlike other resorts in the Poconos Mountains which faced a long decline, Buck Hill Falls remained active. Even today, the resort complex boasts beautiful cabins, a top golf course, lawn bowling and other social activities. While the complex remains active, the inn itself suffered due to neglect and was partially closed in 1990. In 2000, management allowed it to be used as a location for the MTV show Fear, which brought a host of gawkers and vandals to the property. In July 2003, the building was severely damaged due to fire. The Inn at Buck Hill Falls, however, was demolished in the name of progress. Town residents raised the $2.5 million to have the historic structure demolished. The Buck Hill Inn demolition in 2017 brought an end to this once-great community.

Caesars Brookdale Resort on the Lake

Located on 250 acres of prime land in the Pocono Mountains and on a private lake, the Brookdale Resort was one of several operated by Caesars Entertainment (at the time owned by Starwood). In 2008, the property was closed permanently. In September 2014, the property was sold to an out-of-state development company called Silverleaf Resorts. The company intended to operate the property as a timeshare destination called Brook Village at Caesars Brookdale. It is unclear what happened to the timeshare plan. However, in 2017, a company called Brookdale Enterprises received approval to turn the resort into a 196-bed inpatient drug and alcohol rehabilitation center called the Brookdale Treatment Resort. 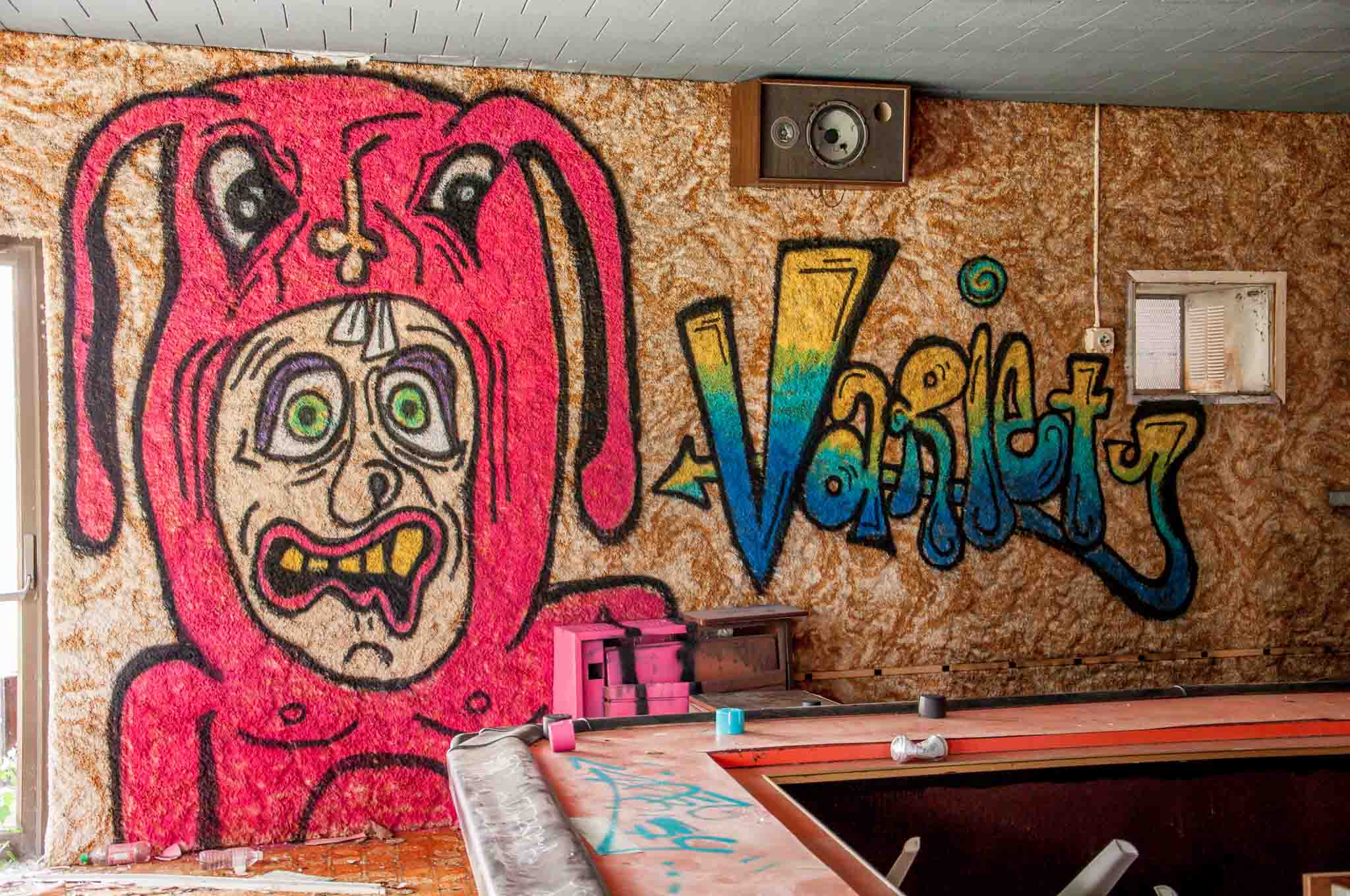 Like the others, this resort began its decline and hit hard times in the 1980s when the owner refused to modernize. In November 1999, the resort went into foreclosure. Less than a year later, facing nearly $30 million in debt, the owner committed suicide rather than see his life’s work sold at auction. A private equity company, Oaktree Capital Management, took over the resort in 2000 and the old Mount Airy Lodge was closed forever on October 29, 2001. The Mount Airy Lodge abandoned property was sold to new owners in 2004 and was ultimately demolished to make room for a new Poconos resort property: the new Mount Airy Casino Resort.

Opened in 1941 as a tavern, Penn Hills Resort would ultimately expand to include over 100 rooms, villas, and cabins. While other resorts continued to cater to the honeymoon and couples crowds, in its later years, Penn Hills Resort became frequent host to swinger parties and a location for alternative lifestyle encounters.

In 2009, the resort co-founder passed away at the age of 102 and the resort was closed. Between 2009 and 2012, the property was owned by Monroe County, which sold off several pieces of the 500-acre plot, including the golf course. In 2014, survivalist and accused murdered Eric Frein is believed to have used the abandoned Penn Hills Resort as one of his hideouts.

In January 2016, a new investment group took over the property and was making plans for some kind of redevelopment. On September 4, 2017, a fire raced through the main lodge building and it burnt to the group. It was the third fire at the abandoned resort in as many years. Some of the Penn Hills Resort buildings were demolished in 2017. 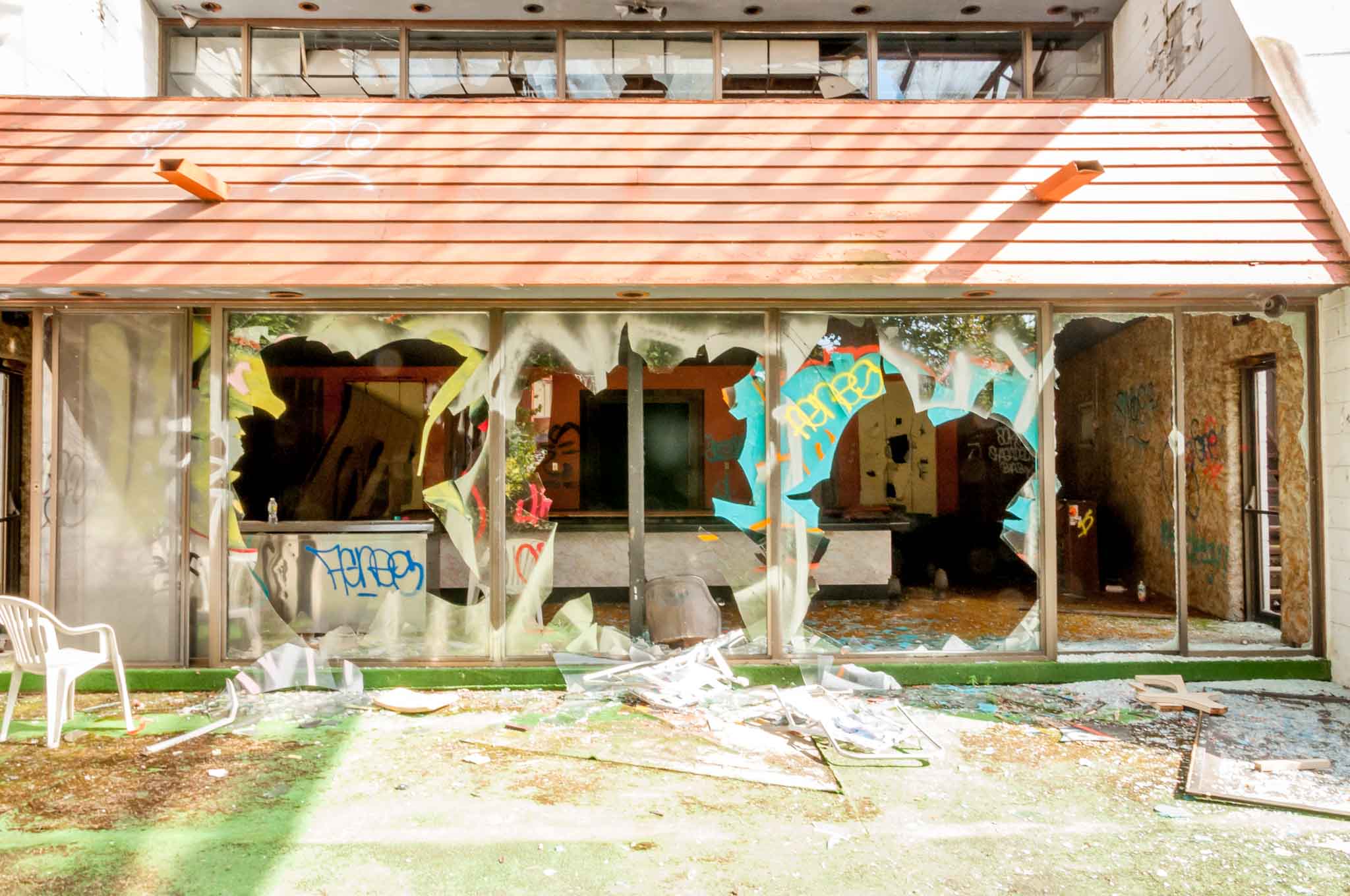 The original Split Rock Lodge was built by Robert V White back in 1941. White also built the trails for the nearby Big Boulder Ski Resort, the first ski resort in the Poconos Mountains. Big Boulder ski resort opened in 1946. A new owner took over the property in 1967.

The lodge was completely destroyed by fire on August 23, 1970 and was rebuilt by local residents in 1971. In 1981, a new owner took over the property and the resort went through a massive expansion, including the addition of cabins, villas and the Town Center (with indoor swimming pool). The indoor water park at Split Rock opened in 2008. Split Rock Lodge still stands today. Read more about Split Rock Resort here.

The Unity House Poconos Resort (sometimes called the White Pines Resort) has perhaps the most interesting history of all the Poconos Mountains Resorts. The 655 acre property was owned by the International Ladies Garment Workers Union and operated as a kind of progressive utopia for about 70 years. The decline of Unity House mirrors the decline of unions that back it. Ultimately, the Unity House Resort closed forever around 1990. The property still exists and Unity House is an abandoned resort. 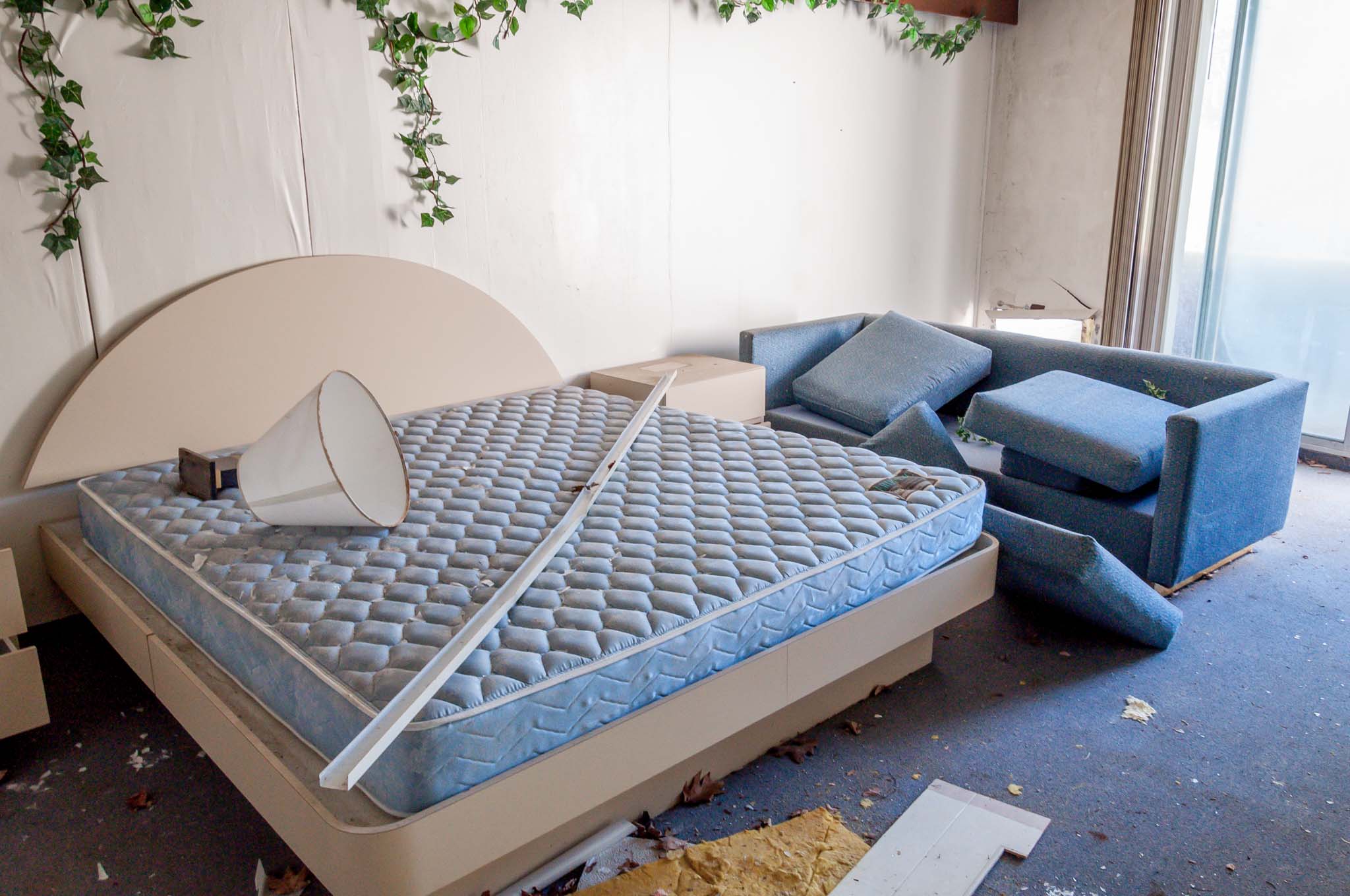 Legal disclaimer: The information provided in this article is for informational and historical purposes only. All resorts and buildings are private property. Trespassing on private property without written permission is illegal. We do not encourage or condone illegal behavior. Enjoy the article and treasure these resorts in your heart, but do not trespass! 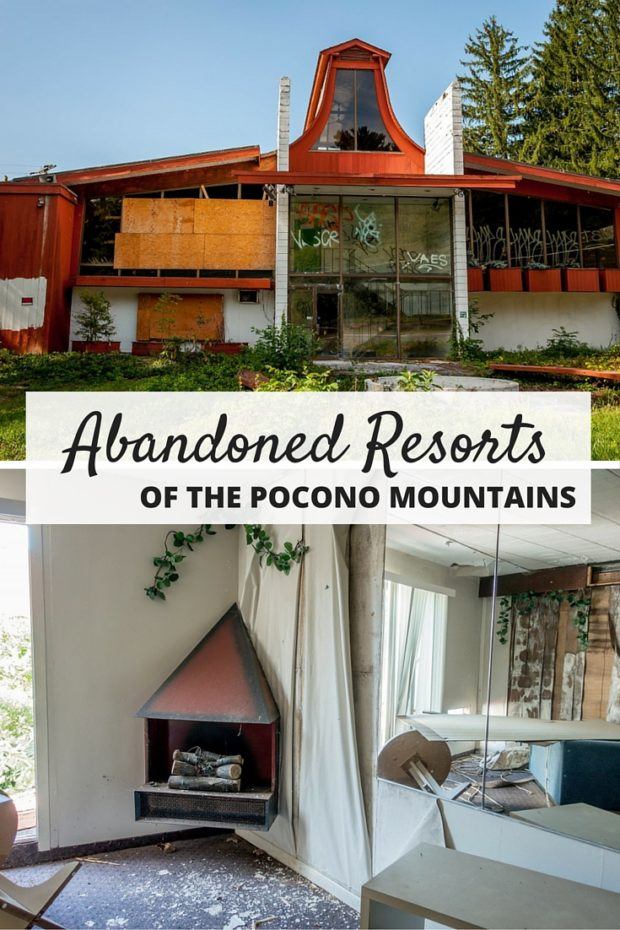 42 thoughts on “The Eerie Abandoned Resorts of the Poconos Mountains”