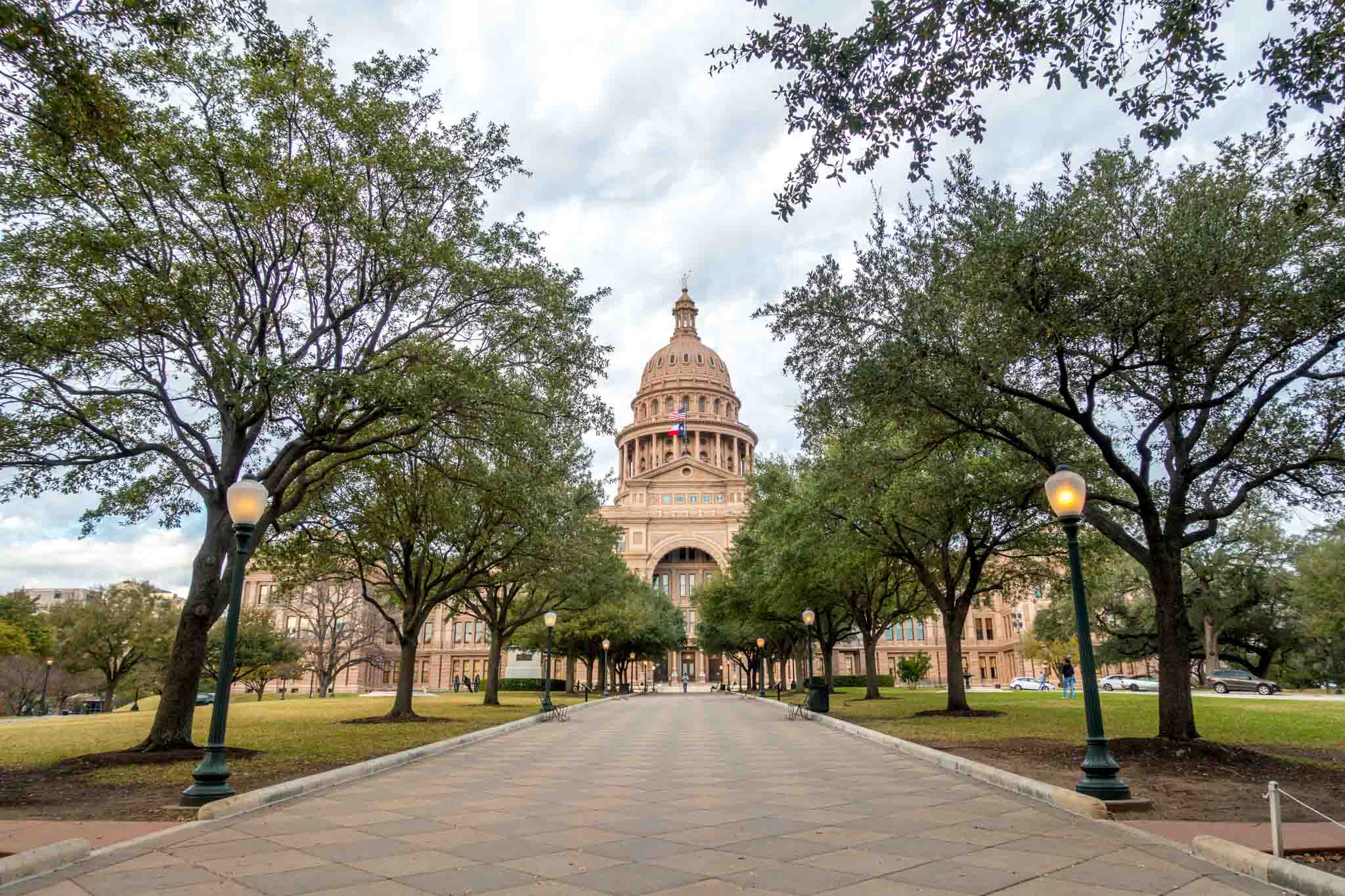 Laura grew up in Texas and her family still lives there, so it’s a place we explore frequently. Full of great cities like Austin, delightful small towns like Fredericksburg, and unusual spots like Luckenbach, there’s always something new to uncover in the Lone Star State.

Before Europeans arrived, the land now known as Texas was home to three indigenous cultures. There is evidence of the Pueblo people, the Mound Builders, and people from Mesoamerica all inhabiting the area. In the early 16th century, European explorers arrived ready to stake their claim.

The amusement park Six Flags Over Texas got its name from the six flags that have flown over Texas during its modern history—Spain, France, Mexico, the Republic of Texas, the Confederate States of America, and the USA. Spain ruled the territory beginning in 1519, and the control lasted until the early 19th century minus the time from 1685-1690 when the French attempted a colonization effort. The Spanish are responsible for some of the state’s most notable monuments, specifically the missions of San Antonio that are recognized at UNESCO World Heritage sites.

Mexico overthrew Spanish colonial rule, taking over control of the Texas territory from 1821 to 1836 when the state won its independence. The Constitution of the Republic of Texas ensured that the government could not restrict slavery or free slaves, required free Blacks to leave the country, and prohibited Native Americans from becoming citizens.

In 1845, Texas became the 28th state in the United States. Around this time, an influx of Czech and German settlers arrived, settling the area in the central part of the state. These immigrants developed a unique culture, vestiges of which still exist through the state’s German towns and sites like gorgeously decorated churches.

The affiliation with the US lasted less than two decades, and the state seceded in 1861, officially joining the Confederate States of America. At the time, 30 percent of the population was Black, and they were predominantly enslaved. Following the Civil War, Texas rejoined the Union in 1870.

Planning a trip to Texas

Texas is the second largest state and it’s larger than many countries, including France and Germany. That means there is lots of space to explore, and there are often long distances between destinations. Driving is the easiest way to get around if you’re looking to visit several cities, and especially if small towns are on the agenda. Within the state, Southwest Airlines links major cities with short flights.

The climate and landscape vary greatly across the state. You’ll find plains, desert, prairies, piney woods, beaches, and even the mountains of Big Bend. Texas even has a major wine region in the Hill Country where the climate and soil are similar to those of the Mediterranean. Make sure to check the weather for all your destinations and pack layers, as the weather is known to change quickly.

Things to Do in Wimberley, Texas, for a Fun Trip

Amid the eye-catching Texas Hill Country landscape is the tiny town of Wimberley.

Read More about Things to Do in Wimberley, Texas, for a Fun Trip

Best Restaurants in Fredericksburg for a Great Meal

Fredericksburg, Texas, is a small town with a booming restaurant scene. With great Texas wine, German specialties, and plenty of Tex-Mex and burgers thrown in, …

Read More about Best Restaurants in Fredericksburg for a Great Meal

There are so many awesome places to see in Texas that don’t make it on most tourists’ radars—the small towns mostly known about and loved only by Texans or those with a real affinity for the Lone Star State. Here’s our perfect Central Texas road trip full of places we love.

26 Fun Things to Do in Dallas, Texas

Dallas is about BBQ and cowboys—both the football kind and the calf-roping kind—but it’s so much more than that, too.

Read More about 26 Fun Things to Do in Dallas, Texas

From local history and culture to international politics and World War II, museums in Fredericksburg, Texas, cover a wide variety of topics.

38 Fun Things to Do in Austin, Texas

Austin is like nowhere else in Texas. With ubiquitous live music and street art and a ridiculous amount of breakfast tacos and breweries, Austin is brimming with character.

Read More about 38 Fun Things to Do in Austin, Texas

25 Fun Things to Do in the Texas Hill Country

With lots of natural beauty, unique history, charming small towns, and exciting big cities, the Texas Hill Country has a wealth of attractions and activities to keep visitors busy.

12 Fun Things to Do in Kerrville, Texas

Kerrville, Texas, offers lots of shopping, art galleries and theaters, and several riverfront parks. With natural beauty, unique attractions, and great barbecue, there is lots to discover (and eat!) here.

Read More about 12 Fun Things to Do in Kerrville, Texas

In the 1960s, Lyndon B. Johnson spent nearly one-quarter of his presidency at the Texas White House in Stonewall, Texas. Now, the house and the surrounding area have been turned into national and state parks — a combination of a working farm and group of historical sites.

These towns are intriguingly Texan and German at the same time.