Rockefeller Center is more than just the ice skating rink and the Christmas tree, or even NBC Studios. This massive group of 19 commercial buildings sprawls between 48th and 51st Streets and between 5th and 6th Avenues in New York City. A Rockefeller Center tour gives you the opportunity to explore the art and history of many of these buildings.

My group of about 20 tour-goers hailed from around the US and around the world. We each got a headset to listen to our tour guide Collin as we wound our way in and out of the buildings. While they clearly marked us as tourists (hey, I lived in New York for five years!), the headsets made sure that we could hear Collin on the busy streets. It also meant that if someone wanted to look at something a little longer than the rest of the group or stop to take a picture, they could still hear the information.

The Rockefeller Center tour began with a brief history lesson on the construction of the complex. The largest private building project undertaken in modern times, the original 14 Art Deco-style buildings of Rockefeller Center were constructed during the Great Depression from 1930-1939. After his investors backed out, John D. Rockefeller, Jr. assumed the project on his own, financing the $100+ million needed to construct the complex from his family’s Standard Oil fortune.

Some existing buildings had to be bought up and bulldozed to make room, but there were two owners who refused to sell. Those two townhouses (one is now a Magnolia Bakery) still stand, dwarfed by the high-rises around them.

For the 1930s, Rockefeller Center was on the cutting edge. Its innovations included heating and air conditioning and the first indoor parking complex. Some of its state-of-the-art lighting and escalators are still present in the buildings 85 years later. The construction itself and the addition of these modern touches proved to be an important contribution to New York’s damaged Great Depression economy, providing 75,000 much-needed jobs.

The focus of the Rockefeller Center tour is the art, much of which was curated by Rockefeller’s wife Abigail. Most of the art – like the buildings themselves – was done in the Art Deco style. All of it was meant to symbolize humanity’s progress toward new frontiers in science and industry.

The creations of 30 artists are featured throughout Rockefeller Center. Paul Manship contributed Prometheus, the giant bronze statue that overlooks the plaza, home to the ice skating rink or an outdoor café, depending on the season.

A block away is Lee Lawrie’s Atlas, which looks out at St. Patrick’s Cathedral. According to my tour guide, the bishop of New York was unhappy about having a non-Christian symbol in full view of the Cathedral. To appease him, Atlas bends slightly at the knee in deference to the church. It’s impossible to know whether this compromise actually happened, but it makes a good story.

Another work with religious overtones is Wisdom, an Art Deco icon over the entrance to the main building of Rockefeller Center, which was a favorite of Rockefeller Jr.’s. Also a work by Lee Lawrie, Wisdom’s commanding gesture and the accompanying biblical quote convey his strength.

Three other works that stood out along the Rockefeller Center tour included a sculpture and two murals. Isamu Noguchi’s News sculpture made of 10 tons of hollow steel graces the entrance to the Associated Press building. Dean Cornwell’s The History of Transportation mural was added to 10 Rockefeller Center just after World War II. In striking red and gold, it depicts various modes of transportation important to the development of America through the boom of commercial air travel.

The biggest mural, American Progress by Jose Maria Sert, covers an enormous wall in the entry of 30 Rockefeller Center. The mural depicts the development of America through strength and knowledge and replaced an earlier Diego Rivera work that featured Lenin, much to the chagrin of the Rockefellers.

The details: Rockefeller Center tours occur hourly beginning at 10am every day of the week. The ticket for the tour only is $25, and a combination ticket to visit the Top of the Rock observation deck is $50.

Interested in more things to do in Rockefeller Center? Check out these options.

Have you ever visited Rockefeller Center? 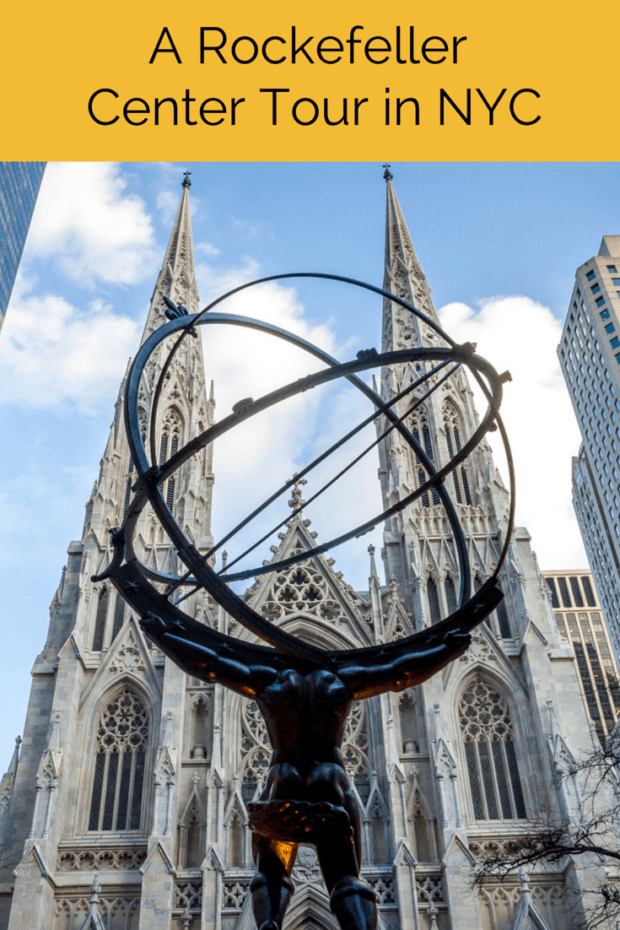 Great information regarding the history of Rockefeller center

Thanks. It's always interesting to learn about a new side of something that seems so familiar.