Located just 90 minutes from both New York City and Philadelphia, the Lehigh Valley has all the makings of the perfect weekend getaway location. It’s close to just about everywhere on the East Coast and there are a ton of activities to keep you busy. And yet, Bethlehem and Allentown are often overlooked. We should know since we live just 45 minutes away and have spent a lot of time here over the last year. Here are some of our favorite fun things to do in Bethlehem and nearby.

Arguably the biggest and the best of the Bethlehem attractions, the Steel Stacks tower over the south side of town. The massive gray and black structure casts a long shadow over the city and speaks to the city’s roots as a company town.

The history of the site dates back to 1857 and the creation of the Bethlehem Iron Company, which later became the Bethlehem Steel Corporation. Along the shores of the Lehigh River, the furnaces turned out steel for skyscrapers and ships, including much of the heavy armor plating for the Navy during World War II.

When the steel factory went silent in 1995, these massive blast furnaces were left to deteriorate. Today, the SteelStacks arts and cultural campus surrounds the giant shell of the blast furnaces, hosting numerous events.

Visitors can explore the site on a guided offered by the Historic Bethlehem organization. The tour, “Along the Lehigh River: The Rise & Fall of Bethlehem Steel,” explores all aspects of the company’s and the town’s history.

Located just below the blast furnaces, the massive Hoover-Mason Trestle is an engineering marvel. Constructed around the turn of the 20th century, this section of track is over 40 feet off the ground and extends about a third of a mile. The narrow-gauge railroad that ran along this track would carry raw materials for steel production.

While much of the old steel plant is gone, the Hoover-Mason Trestle has been refurbished and turned into an elevated walkway for visitors. Information panels explained what used to happen along the trestle and the nearby furnaces.

Most people associate the colonial period in Pennsylvania with the historical sites in Philadelphia, but there is lots of history in Bethlehem, too. In 1741, 80 Moravian refugees from Europe settled here to live the life of religious freedom. On 500 acres of land carved out of the Pennsylvania wilderness, they lived in peace with nature and surrounded by animals.

The Moravians hailed from the area that would now be considered the Czech Republic. They fashioned their community as a collective Utopia where all property was held by the church and everyone worked for the collective benefit of the community. From the beginning, women were given standing and the community even welcomed formerly enslaved people. The community was a Utopian ideal, at least for a time.

A visit to the Moravian Museum of Bethlehem is a great way to learn about this interesting historical period. Better yet, try to get in on one of the many walking tours offered of the various Moravian buildings in town. Children will particularly enjoy the blacksmith demonstrations in the original blacksmith shop dating from 1750 right on the main street.

Built on the site of the old steel plant, the Wind Creek (formerly the Sands Casino) was part of a massive brownfield redevelopment initiative for the city. Most of the plant was torn down, and a destination resort was built in its place.

The Wind Creek contains a hotel, table games, slot machines, The Outlets at Wind Creek Bethlehem shopping mall, and numerous restaurants. We’re not huge gamblers, but if that is your passion, Wind Creek is a great place to indulge.

The large Martin guitar factory is a temple to the glorious sounds of music. From country to rock, it has all been done on a C.F. Martin & Co. guitar. We don’t play guitar, so we aren’t as passionate as many visitors, but the tour is a fascinating and enjoyable experience.

Visitors enter though a rustic barn entryway into a thoroughly modern factory inside. The tour traces the 300 different steps in building a guitar as well as quality control, which includes employees riffing out some tunes on the newly minted instruments. But the highlight is the memorabilia room where famous Martin Guitars can be seen along with displays about the musicians who put the company on the map.

After the tour, you can pick one up in the visitor center and play a few tunes. And the 1833 shop has some of the most interesting and unique merchandise we’ve ever seen on a factory tour. The factory is a fascinating visit even for the casual music fan and is one of the best free things to do in the Lehigh Valley.

Driving the 50-mile Lehigh Valley Covered Bridge Tour is like traveling back in time. All seven of the bridges can still be visited today, and you can drive over five of them.

Along the tour, there are numerous information panels explaining the history of the bridges and the local area. And you’ll even learn the answer to everyone’s question: why are covered bridges covered? The answer is to keep the trusses and roadway dry, thereby preventing rotting and lengthening the lifespan of the bridge.

This handy guide is helpful if you want to drive to the seven covered bridges in the area.

Beginning in 1905 and for more than 100 years, the Mack Truck company was based in Allentown, Pennsylvania. While the headquarters has moved to North Carolina, the sentimental heart of the company remains with the Mack Trucks Historical Museum.

This museum is one of the best family-friendly things to do in Allentown and is every four-year-old boy’s dream. The museum features dozens of big trucks to geek out on, including the Megatron truck from the Transformers movie, while also showcasing the company’s history and memorabilia. More than just a corporate museum, the Mack Trucks museum is a look at the technological design and developments in the industry as a whole.

On Main Street in downtown, you’ll find The Moravian Book Shop. This just isn’t your average bookstore! It is the oldest continuously operating bookstore in the world and the second oldest bookshop in the world. Since 1745, the shop has been seeing to the intellectual needs of the town.

One of the top attractions near Bethlehem are the twin amusement parks of Dorney Park and Wildwater Kingdom. Drawing visitors from all over the Mid-Atlantic, these parks hold the attention of kids and the young at heart. But thrill seekers will enjoy riding one of the longest roller coasters in the world.

Originally built in 1860 by Solomon Dorney on his farm/estate, the park was quickly taken over by the local trolley company. Dorney Park became one of the many trolley parks in the U.S. that were used to boost trolley ridership on the weekends. Over the years, the park has gone through numerous upgrades adding lots of roller coasters and thrill rides.

Built within Dorney Park is Wildwater Kingdom, one of the top Lehigh Valley attractions in the summer. This park has over 25 water slides and aquatic features to keep people cool during the hot summer months. On hot days, this park can be packed.

Why not save some money? Get discounted tickets for Dorney Park and Wildwater Kingdom here.

See a show at Godfrey Daniels

On the south side of Bethlehem in a rather unassuming building is a world-class music venue: the Godfrey Daniels Music Hall. From humble roots in an abandoned donut shop to now being on the international map for independent musicians, Godfrey Daniels has been welcoming bands for over 40 years. From major musicians playing throwback sets to up-and-coming artists, a show at Godfrey Daniels is one you won’t likely forget.

For 10 days every August, hundreds of musicians descend on this former steel town to perform a series of concerts that is collectively known as Musikfest. It’s part fair, part concert, and all kinds of fun. Spread over several stages, you can catch shows by Pennsylvania favorites The Amish Outlaws, or big-name acts like Dierks Bently, The Chicks, and Maroon 5.

Best of all, the entire festival is free! Only the headline acts on the Musikfest Sands Steel Stage require a ticket. We spent a long weekend enjoying dozens of acts, including a performance by Dierks Bentley.

Bethlehem markets itself as Christmas City USA. Named by the Moravians for the little town of Bethlehem in the Bible, the one in Pennsylvania tries to live up to its name. Every December, the city has the Christkindlmarkt Bethlehem, named one of the world’s best Christmas markets by Travel & Leisure magazine.

In big tents near the Steel Stacks, visitors can shop and browse for holiday gifts and try to create the magic of the German Christmas markets. While the great Christmas markets of Europe are outdoors and in the cold, the Bethlehem markets are in a tent to keep you out of the cold (and rain, as we experienced last year).

For more details on visiting the market and seeing the city during the holidays, check out this article.

The craft spirits revolution was late in coming to Pennsylvania to due to antiquated liquor laws. However, there are number of great Pennsylvania distilleries today, and one of them is here.

Located in an old bank building, the Social Still distillery is one of the most beautiful working spirit houses in the United States. The glass-encased production facility is a beautiful visual showpiece to the spirits and cocktails they produce. The on-site restaurant features light bites and full meals from truffle fries to seared scallops.

Hang out at Hardball Cider

Craft cider has come to Pennsylvania with the Hardball Cider Company in Mount Bethel, PA. At their tasting room, visitors can sample their ciders, wines, and local beer while enjoying food trucks and live music most of the year.

You can’t spend any amount of time here and not end up at Brew Works. This local institution has been dedicated to the craft since 1998. They serve top craft, both their own as well as from other breweries of merit, plus top-flight pub food. When a local tells you to meet them at the Brew, this is what they are talking about. And if you miss it on your visit, then you are just missing out.

The Historic Hotel Bethlehem – The granddaddy of Lehigh Valley hotels, this hotel has a prime location right on Main Street steps from all the Moravian sites, as well as numerous restaurants. Year after year, the Hotel Bethlehem is named one of the best places to stay.
Wind Creek Bethlehem Casino & Resort – Whether you are a gambler or not, there’s no beating the Wind Creek Resort. It’s a great location right at the Stacks and the hotel offers amenities like indoor pool and valet parking.
The Sayre Mansion – The Sayre Mansion is one of the finest B&Bs in Pennsylvania. This property has a great location, a fantastic breakfast, and just exudes romance.

We were the guests of Discover Lehigh Valley. All opinions of the fun, unique, and engaging are our own. 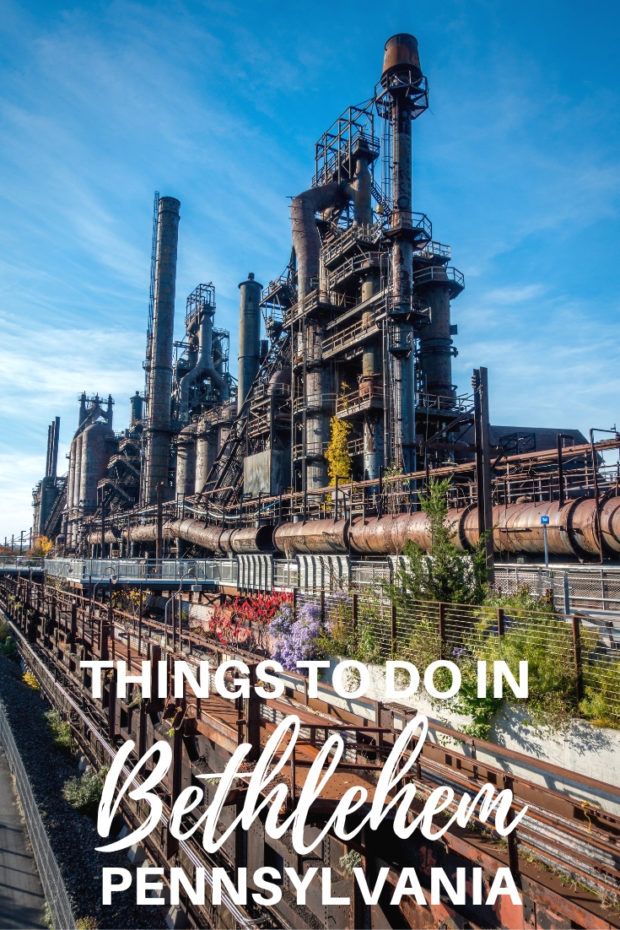 So great. Thanks for sharing