In southeastern Pennsylvania, you get used to the idea of being surrounded by history. After all, Philadelphia was the birthplace of the Declaration of Independence and the Constitution, and it was the first capital of the United States. The legendary Valley Forge National Historical Park is just a few minutes’ drive, and for an hour in any direction, almost everywhere you go was once part of a Revolutionary War battlefield. Not far away is a place with another fascinating (but lesser known) story to tell—the historic Moravian museum and sites of Bethlehem, Pennsylvania. 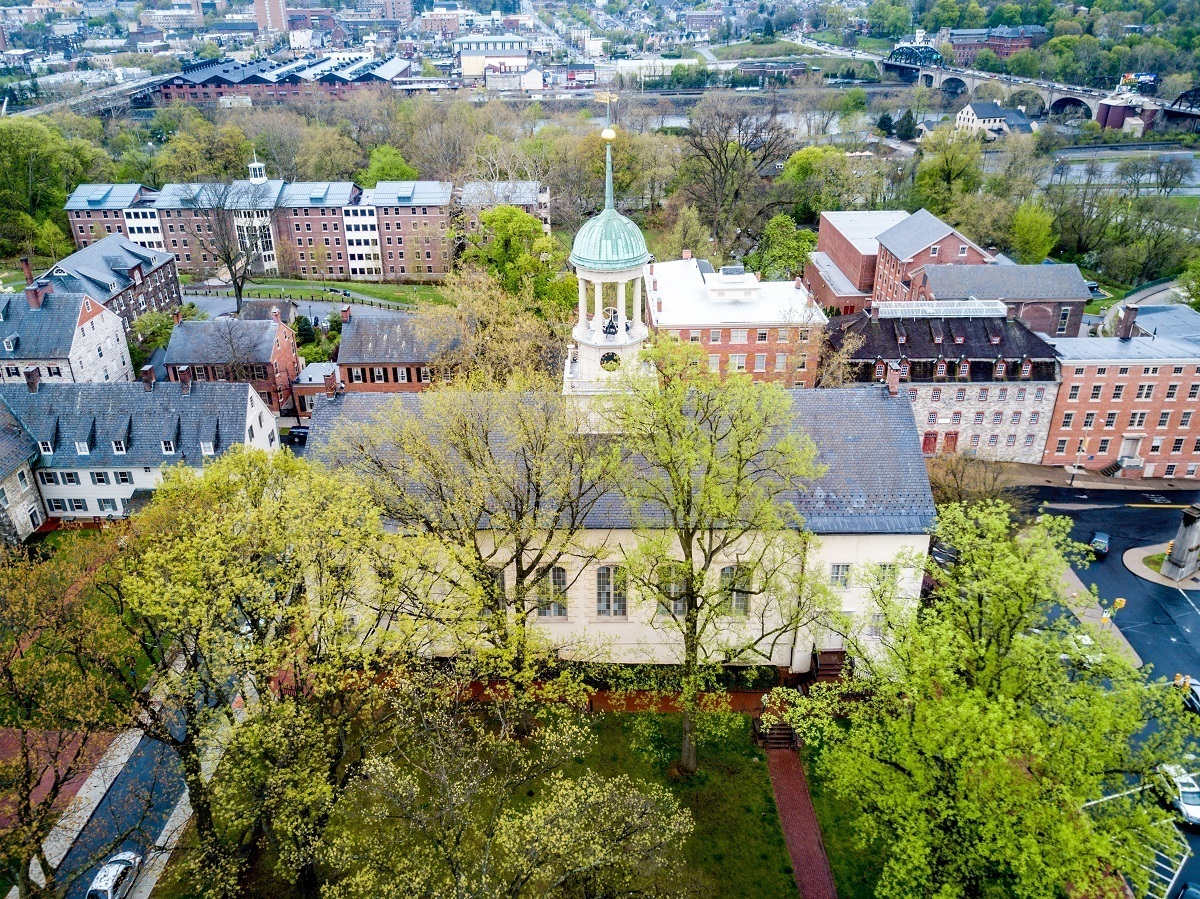 I first became fascinated with the Moravians a couple of years ago when I visited Old Salem Museum and Gardens in North Carolina. This living history museum shows how Moravians lived there in the 1770s, complete with functioning gardens, a bakery, a tavern, and much more. As often happens, I had failed to realize there was a similar story in my own backyard. Bethlehem, Pennsylvania, has more than 20 historic Moravian sites that date back to 1741, each with its own story. 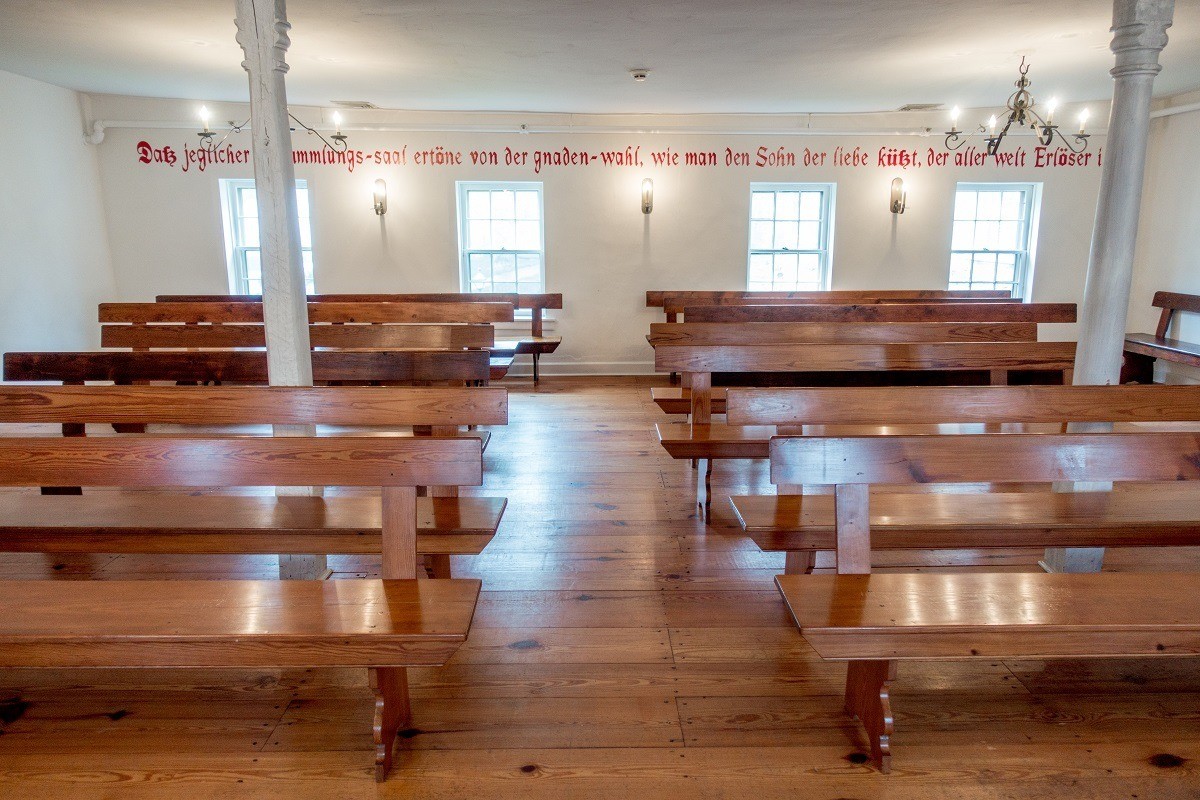 The saal, the central place of worship for Moravians, in the Moravian Museum

Appropriately enough, we began our Moravian tour of Bethlehem at the beginning—the Gemeinhaus. This timber building, constructed in 1741, was just the second structure in Bethlehem. For several years, 80 members of the community lived, worked, and worshipped here alongside their animals. The living arrangement reminded them of the Biblical story of Jesus’ birth in a stable with animals, which prompted them to call their new settlement “Bethlehem.” 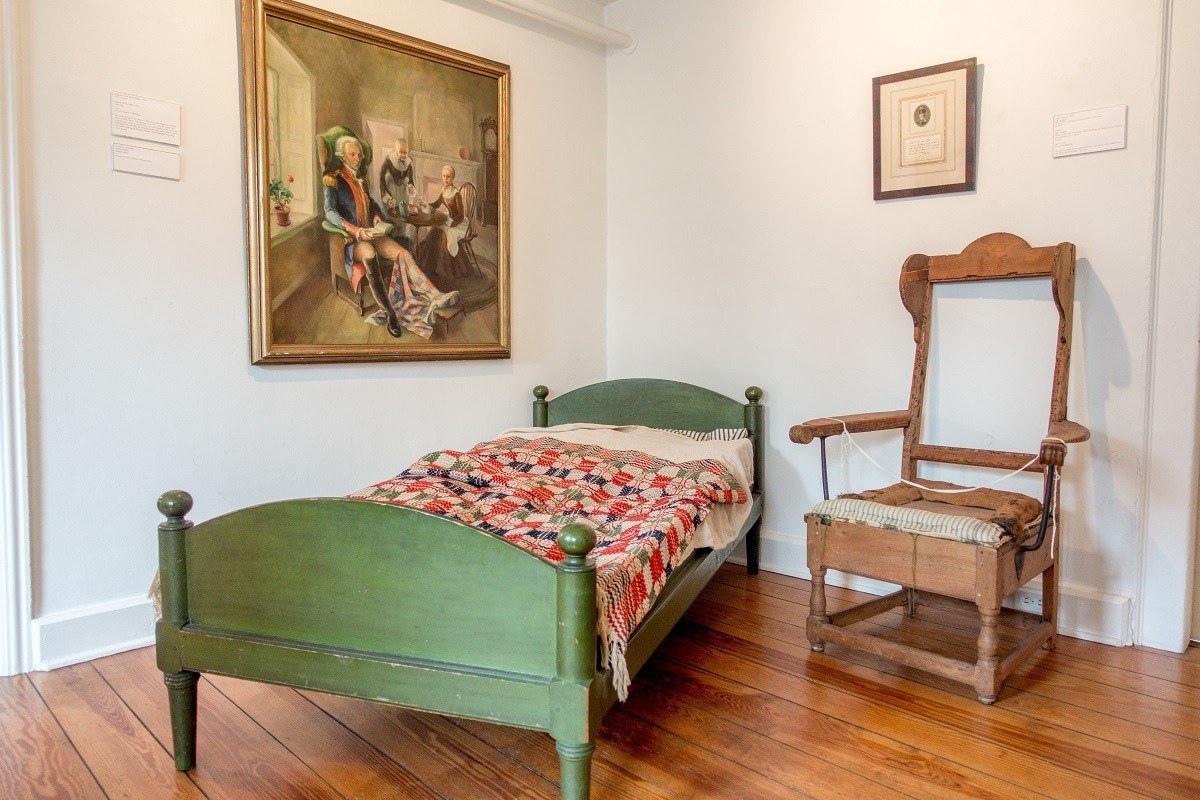 Today, the Gemeinhaus is the site of the Moravian Museum of Bethlehem. The museum gives visitors an overview of life in this settlement that the Moravians had hoped would be a utopian community where no one owned anything and everyone worked for the greater good.

At the museum, you learn about the Moravians’ origins in the Czech Republic, their move to the New World, and their multi-cultural community based on working together. It’s hard to imagine a place that educated women and welcomed former slaves even before the American Revolution, but Bethlehem was that kind of place. Members also refused to enlist in the military and kept their community closed to those of other faiths.

Our guide, fully decked out in tights, a leather vest, and colonial-era hat, led us from the Moravian Museum to our next stop—the Single Sisters’ House. This building was constructed parallel to the Gemeinhaus in 1744. In just a few years, the community had begun to grow substantially, so the building was needed to make room for new members and to begin separating the men and women as dictated in Moravian culture. The women who lived here cooked, sewed, and cared for the children of the community. Interestingly, it remained occupied until 2007. 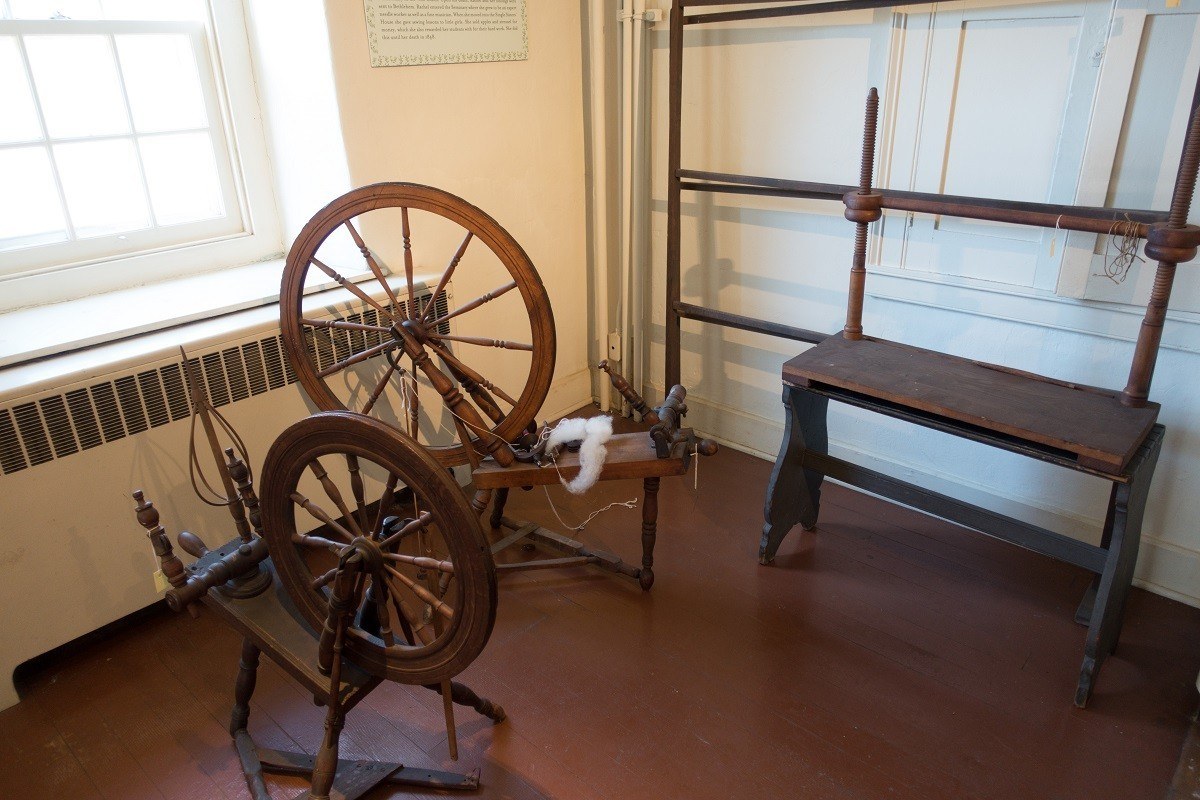 As the Moravian community thrived on its 500 acres of land, more and more craftspeople made the area their home. By 1747, 35 crafts, trades, and industries had been established. There were butchers, clockmakers, tailors, masons, and others who helped the community function. The evidence of many of the trades still stands along the creek. You can visit the Luckenbach Mill or the 1761 Tannery, or take a peek inside the 1750 Smithy where a blacksmith makes 18th-century tools and other items most weekends of the year. 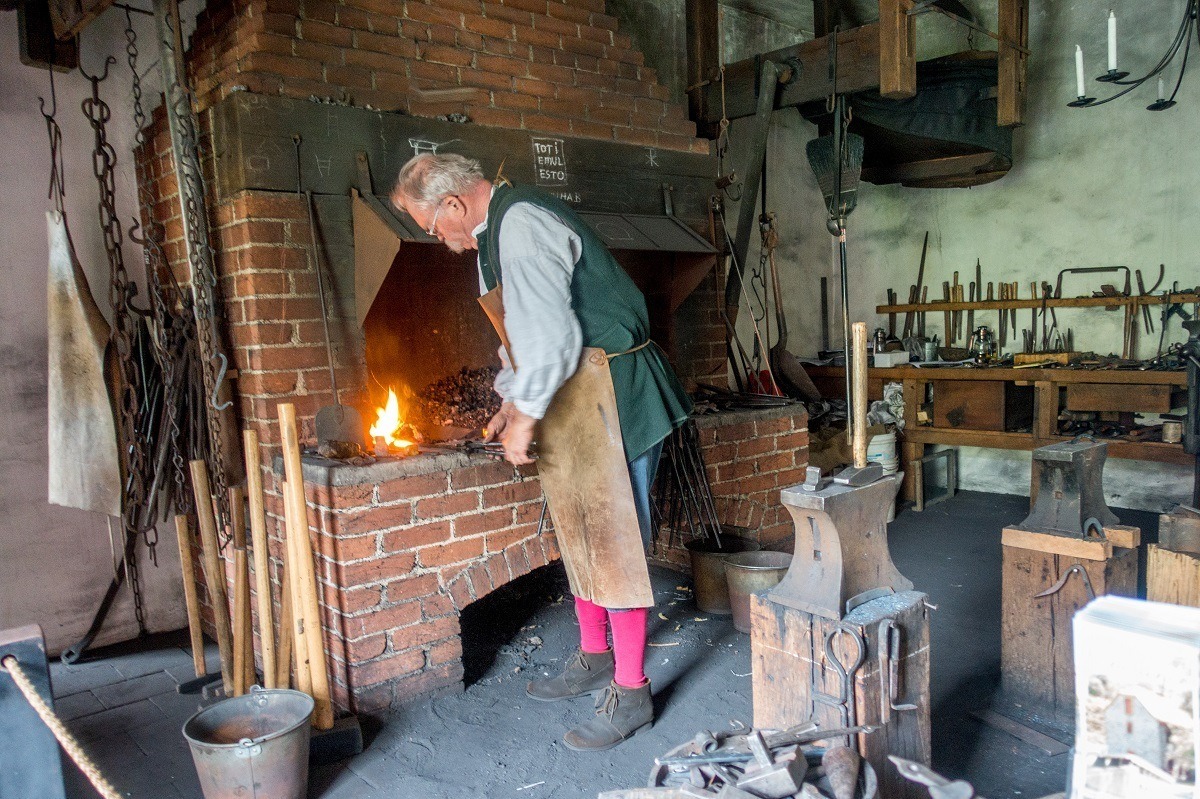 Being the science and medicine nerds that we are, we were excited to see the apothecary where the Moravian residents were treated for various ailments. In a time where medical solutions were still very rudimentary (bloodletting contributed to George Washington’s death), the Moravians had figured out some key things like the importance of sequestering the sick away from well residents. As soon as 1747, they had planted a garden of medicinal herbs and made their own compounds.

The current apothecary location dates from 1852 but features the original hearth used in the apothecary 100 years earlier. You can also see apothecary jars, medical instruments, and homeopathic kits at the Moravian Museum. 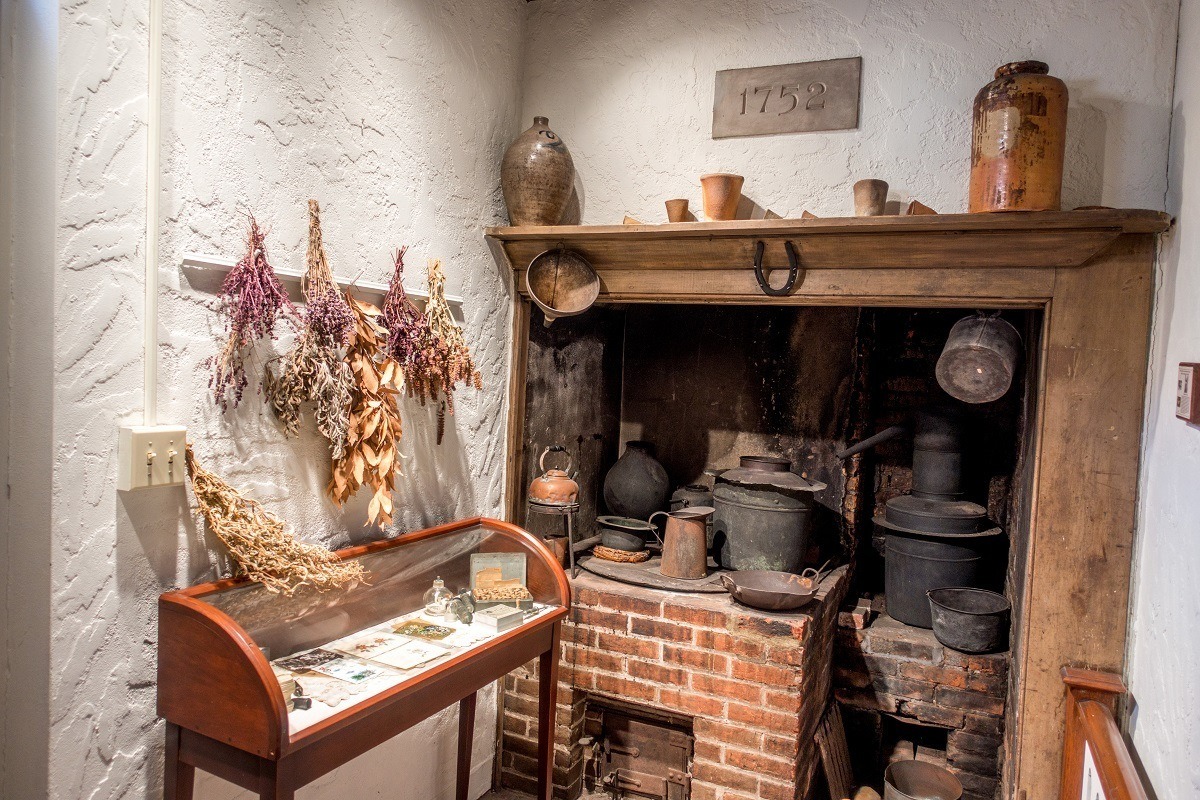 The original compounding stove from 1752 at the Moravian apothecary 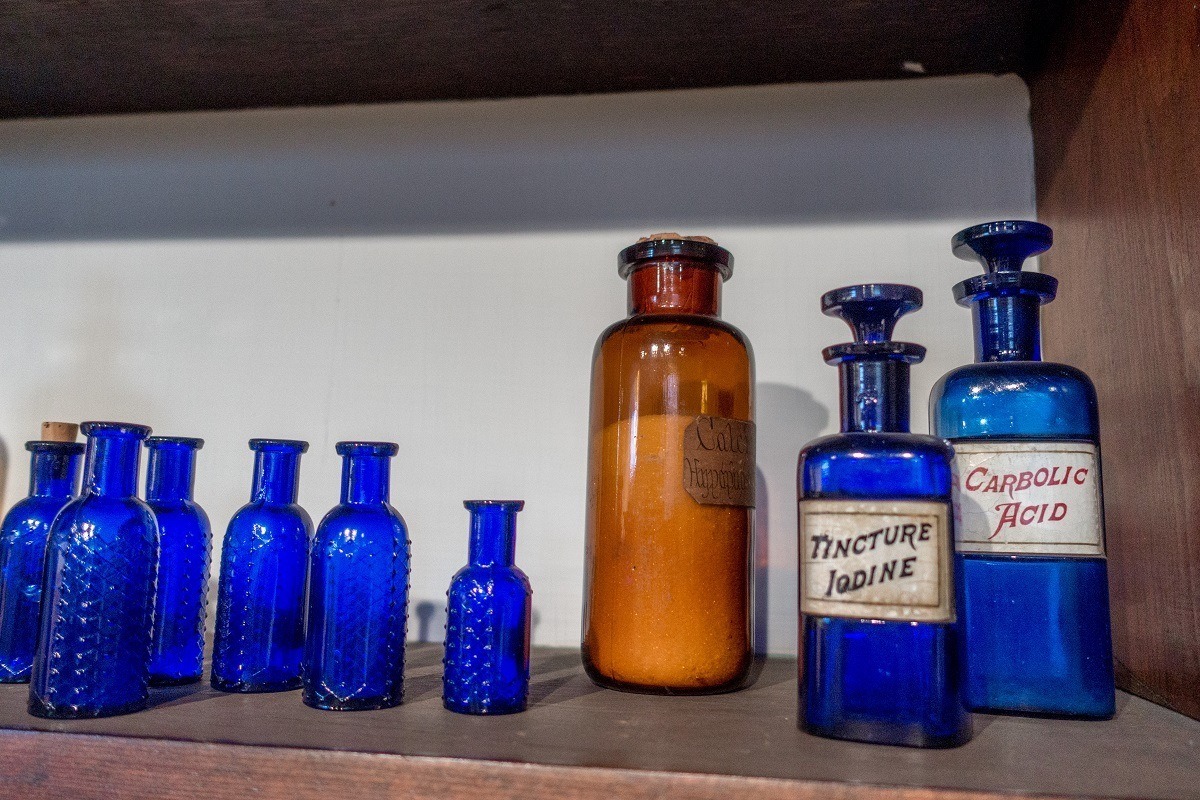 Medicine bottles in the apothecary

Another integral part of life in Bethlehem then and now is beer. And, luckily, the folks at Historic Bethlehem have acknowledged that with an exhibit at the Goundie House right next door to the Visitor Center. In 1802, Johann Sebastian Goundie moved to the United States to become the brewmaster at the Moravian settlement in Old Salem, but only one year later, he ended up in Bethlehem instead. Goundie heavily influenced brewing in Bethlehem and ran the local brewery for more than 20 years. The exhibit in his home (restored to how it looked in 1810) tells the story of brewing in the area from its Moravian history through Prohibition and beyond.

The tools for household brewing in the Moravian community

Inspired by our experience at the Goundie House, we decided it was time to get a little more hands-on experience with the local alcoholic specialties. We headed right down the street to the Moravian Book Shop, the oldest continuously operating bookstore in the world, which dates from 1745. The Moravian Book Shop still sells books but is also a great stop for gifts, Bethlehem souvenirs, and even mead. 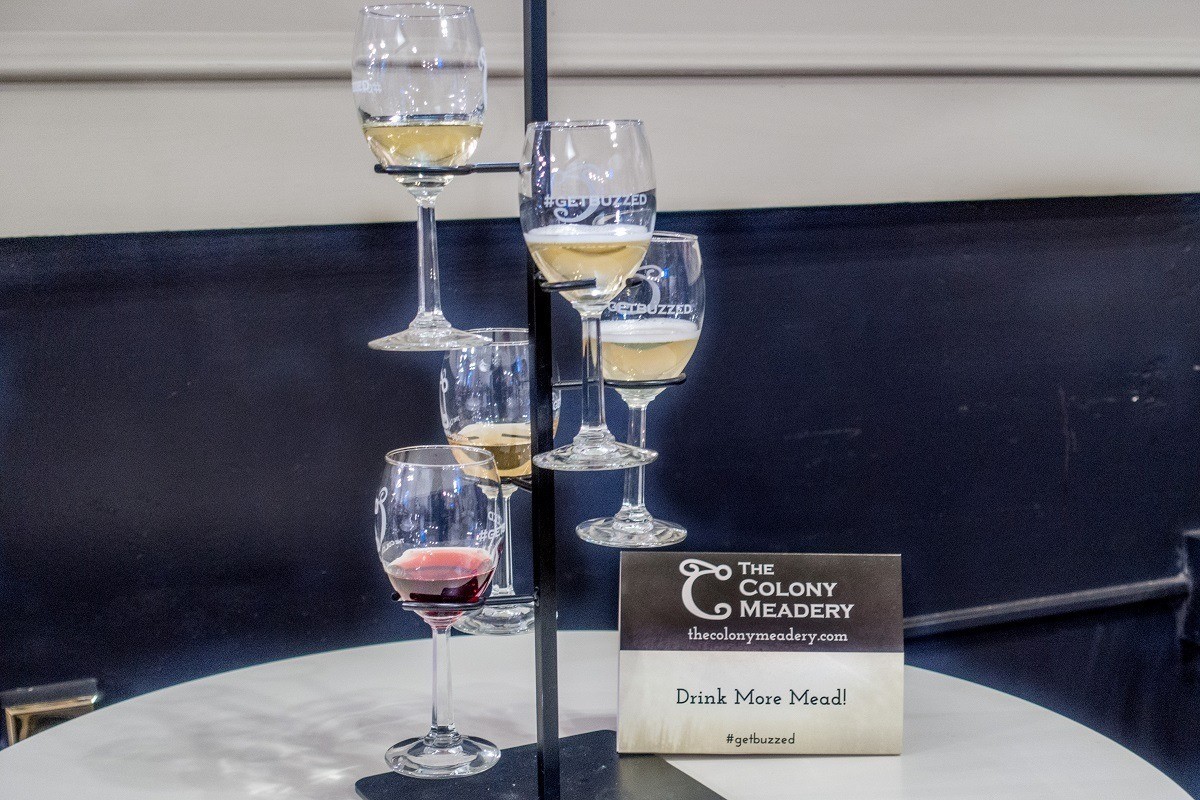 Just a few of the options at The Colony Meadery

In the back of the Book Shop, you’ll find The Colony Meadery. With more than 30 types of mead ranging from traditional to lime and berry flavors, you’re likely to find lots of selections you enjoy. At least we did. A tasting selection with a cheese plate or some hummus in this historic space is a great way to wrap up a visit to Bethlehem. 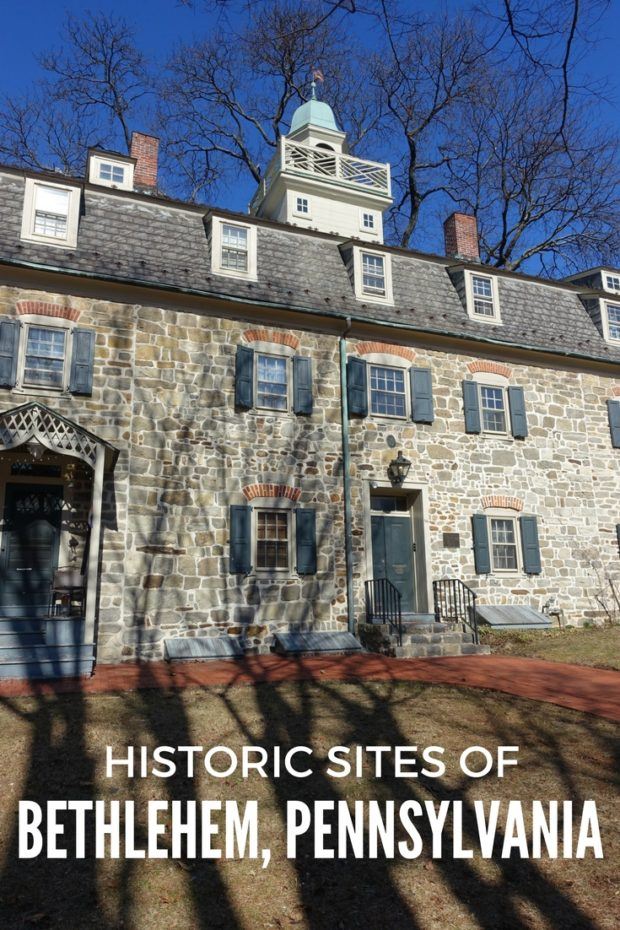 Thank you Laura for the insight you provided on Moravian history in PA. I found an excerpt of your narrative on Pinterest. I literally grew up in a suburb of Bethlehem (Hellertown), and my family immigrated from Czechoslovakia, but yet, I had absolutely no education about the Moravians. I have lived in CA for over fifty years, and even though I have very little family left to visit, you've given me the motivation to make a trip back to Bethlehem to learn what I missed out on when it was in my backyard. Thank you.

Hello Laura, that really is a nice short history of Bethlehem with wonderful photos! As a boy I was a student at the Moravian Zinzendorf boarding school at Königsfeld/Black Forest, Germany, 1954-1958. In September this year (2019) I took a tour along the USA east coast, and from Philadelphia I took a day's visit to Bethlehem with the guided Historic Tour - all the old houses and the church very much like in Königsfeld (founded in 1806). I'll send a link of your history to some of my old pals and a former school director at Königsfeld, who is very interested in Moravian history. So thanks a lot to you!

We just visited Bethlehem for the 1st time on Christmas Eve. What a historical part of town this is. So beautiful to visit. Also enjoyed seeing the Bethlehem Steel across the river.

I have also stumbled across Moravian history when we were in Manchester, England of all places. It's in an area called Fairfield, and they have a very similar to the story of the Bethlehem Moravians (in that they have stuck to themselves and kept their culture thriving after all these centuries) and a striking similarity in architecture, too. Marking this down for our next trip to America.