11 Top Things to Do in Tirana, Albania

Home » Europe » Albania » 11 Top Things to Do in Tirana, Albania

Tirana, Albania, isn’t at the top of most travelers’ lists. Even in Europe, it has a rather checkered reputation. Those who have heard of it usually haven’t heard anything positive. However, these past associations die hard. We found the Albanian capital city to be a fun and lively place. Here are some amazing things to do in Tirana, whether you have a weekend or longer.

Any article on Albania has to cover both sides of the story. Albania’s history isn’t a great one. Trampled by the Axis Powers during World War II, the country was left unstable after the war. Falling into a totalitarian communist regime under Enver Hoxha, the country languished because of his paranoia. He erected thousands of bunkers around the country to protect it from an invasion that would never come from an enemy that did not exist.

After the breakup of the Communist Bloc in the 1990s, Albania faltered. The country became a hotbed of organized crime (mostly the smuggling of stolen automobiles from elsewhere in Europe) and sex trafficking. Albania was, and remains, one of the poorest countries in Europe. The average Albanian makes about €1.8 per hour (roughly €330 per month).

But things are looking up in Albania and in the capital of Tirana. Tourism is increasing, and for good reason: Albania makes an extremely economical travel destination, and there are lots of beautiful places to see across the country. We had a chance to visit and here are our recommendations.

Skanderbeg was an Albanian statesman and general who led a rebellion against the Ottoman Empire from 1443-1468. His rebellion gave a birth to the notion of an independent Albanian state (which would come 444 years later in November 1912). For his military success and creation of an Albanian identity, he is honored as a hero in Albania.

Skanderbeg Square, complete with a statue of him atop his horse, is in the center of the city. The statue is new. During the communist era, a statue of Joseph Stalin stood on the spot. Many of the city’s important roads intersect here and the square is flanked by important government buildings and museums. This square is the heart and soul of the Albanian people.

This small mosque next to Skanderbeg Square is an important house of worship for the Muslim-majority in Albania. Completed in the 19th century, it was unused during the Communist era since all religion was banned. We were fortunate enough to meet the local imam and hear from him first-hand how life in Albania has changed…and improved. The mosque is not to be missed, especially the paintings on the walls.

Mount Dajti towers above Tirana. The summit can be reached by a 1-kilometer cable car which whisks visitors to the summit 800 meters above in just under 15 minutes. At the summit, there is a network of trails for hiking, a traditional Albanian restaurant (which is excellent!) and a tourist hotel. The views alone make this trip to the summit worth it.

At the base of Mount Dajti is a small military base built into the side of the mountain. This military bunker, once highly classified, was to be the home for military and government elites in the event of invasion or nuclear war.

Today, inside the highly protected walls, a mixed-use art and history museum called BUNK’ART has been opened to document and explain the country’s troubling Communist-era past.

The museum’s director, Eva Haxhi, explained to us, “People don’t like to talk about Communism,” so the museum is important introduction to the atrocities of the past. This museum is one of the best things to do in Tirana and was the highlight of our visit.

While BunkArt’s location is remote, the Pyramid (or as it is called locally: the Piramida) could not be more centrally located. The Pyramid is located right on the main road leading from Skanderbeg Square to the Presidential Palace on the banks of the Lanë River.

This squarely designed and completely out of place building now sits vacant. It was designed to be a museum to Communist dictator Enver Hoxha. The building’s fate is now unknown. It sits empty, only to be climbed several times a day by the passing tourist or local kids. Fans of street art may want to walk around the backside and see the murals painted by local graffiti artists.

This primitive bridge was near our hotel and we got to see it every day. Originally built in the 1700s, it is one of the oldest surviving structures in Tirana and one of the few left from the Ottoman era. The bridge originally spanned the Lanë River, but the river was redirected when modern city planners started laying out the city in the early 20th century. The bridge is a small piece of history in a rapidly modernizing city.

The Block (or Blloku) is a trendy section of southwest Tirana filled with bars, shops, and restaurants. This area has always been home to the city’s elite. During the Communist era, high ranking party officials all had homes here. Now, the Block is where Tirana comes to party.

Each night we found ourselves in the Block hitting up a bar for a drink. Each establishment is packed with young Albanians and expats dressed in their finest. The Block is the place to see and be seen. If you’re looking for things to do in Tirana, put on your best and rub elbows with the locals.

About 30 minutes west of Tirana is Albania’s ‘first city’: Durrës. This is one of Albania’s oldest cities with a deep, rich 3,000-year-old tradition. The compact city center is easy to explore on foot.

The Durres Amphitheatre is one of the largest Roman amphitheaters in the Balkans, accommodating over 20,000 people. Part of the town’s old town wall (and fortress fortification) still exists. The wall leads down to the port, where the Venetian Tower stands guard at the entrance to the city. This fortification dates back to the 5th century when it was the anchor of the Durres Castle. The Tower and the port saw heavy fighting in the early days of World War II when locals resisted the Italian fascist invasion.

Most people coming to Durres head to the broad sandy beaches south of the city known as the Albanian Riviera. This is where people from Tirana come for the weekend to soak in the sun and cool in the water. The beaches are some of the largest we’ve seen anywhere.

Today, visitors come for the charming handcraft bazaar which sells traditional carpets and woodworks as well as the Kruja castle. The castle complex contains the Skanderbeg Museum containing objects from this famous Albanian’s past as well as the national museum, which shows the traditional life of Albanians. At the base of the hills, several wineries produce remarkable vintages.

Albanian Wine. The phrase doesn’t roll off the tongue. Albania isn’t exactly known as a major wine producing region. However, there’s an emerging viticulture scene focusing on the production of organic wines.

We visited the Uka Winery on the outskirts of the city where we sampled Merlot and Kallmet (an indigenous grape varietal to the Balkans). The Uka Winery is small (just 4 acres), but produces a full, bold, and lovely wines in beautiful surroundings. The open restaurant is perfect for sampling the wines and delicious grilled meats.

This pedestrian street cuts across the central part of the city. It runs past what is left of the Tirana Castle (sometimes called the Kalaja or the Fortress of Justinian). The street runs past tourist shops and the art museum and is frequently commandeered for special events. During our visit, the street was covered with hundreds of picnic benches and big screen TVs broadcasting soccer matches. No trip to Tirana is complete without traversing the Rruga Murat Toptani at least once.

We visited Albania as guests of JayWay Travel, specialists in custom tour packages across destinations in Central and Eastern Europe. All opinions of the unusual and unexpected are our own. 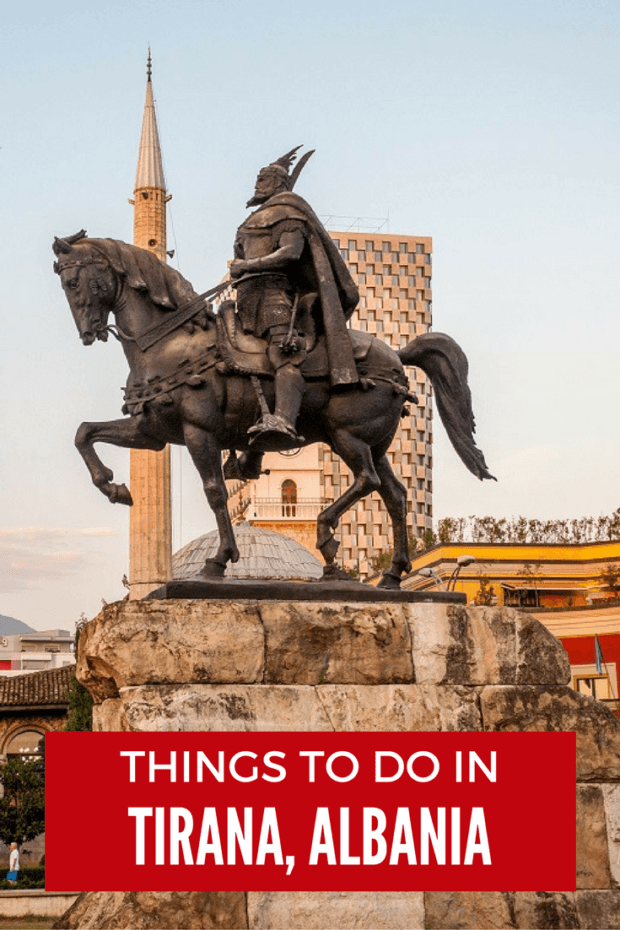 Please revise your paragraph about Skanderbeg. The way it is written sounds like he helped for the liberation of the Albanians from the Ottoman Empire. Even a quick glance at him - his clothes and arms - is enough for one to see that he lived a number of centuries ago. Yes, he is a hero but he was fighting against the Ottomans when they were conquering the Balkans, not at the time Albania got independence from them.

Thanks for the comment. Just to be clear, the article is accurate as written. He led an uprising against the Ottoman Empire (the Skanderbeg Rebellion lasting from November 1443-January 1468). And his efforts "gave a birth to the notion of an independent Albanian state." Put differently, he helped create the idea of an "Albanian identity" that led to an independence movement. We don't say anywhere that he delivered independence to Albania. However, we have added the dates to help clarify.

I was just there last week and loved it--the modernity and tradition and even the traffic chaos. I didn't get a chance to go on the cable car or spend nearly as much time exploring Tirana and other parts of Albania as I would have liked. Next time. I definitely want to return to Albania and see more someday.

We visited about 18 months ago and LOVED it. I am still telling friends and colleagues that they need to go, despite all their warnings before we went that it is so dangerous (it's not).

You are right about it being an economical place to visit and even the airfare wasn't that bad from the US.

I hope people really give Albania some consideration when planning a trip. It's a little gem that deserves a visit.