Lubeck, Germany, is like a painting. Its spires rise across the city; its colorful merchant houses—with their stepped and sloping tops—dot the landscape; its medieval buildings may just stop you in your tracks. And all this beauty is complemented by divine food, great shopping, and a proud history still visible across the city today. With so much to offer, this northern German city is not to be missed. Here is what to do in Lubeck, even if you’re short on time.

What to do in Lubeck

The buildings in Lubeck are some of the most unique we’ve seen anywhere in the world. The buildings, in fact, are the reason that the whole Old Town of Lubeck was named a UNESCO World Heritage Site back in 1987. They’re just spectacular.

Although 20 percent of the city was destroyed during World War II, many of its historic buildings remained intact or were reconstructed. Three of our favorites were the Hospital of the Holy Spirit, the Holsten gate, and the salt storehouses.

The Hospital of the Holy Spirit with its five copper spires dates from the Middle Ages and is one of the oldest social institutions in Europe, caring for the sick and elderly from the time it was built through the 1960s. The Holsten gate is another amazing example of Lubeck’s Hanseatic architecture, dating from the 1470s. It’s impossible to visit Lubeck without seeing the imposing structure. Hundreds of years ago, it both welcomed visitors and protected the city.

Nearby are the red-brick salt storehouses constructed from the 1500s to the 1700s. They were important for storing salt, which was in high demand before refrigeration. Now, they are just really pretty to look at in their perch along the Trave river and remind us more of the stepped gabled roofs of Bruges or Amsterdam than architecture in other parts of Germany.

The Gothic-style St. Mary’s Church (Marienkirche) took 100 years to build, beginning in 1250, and is the third largest church in Germany. Its interior is filled with ornate carvings and artworks and is home to the world’s largest organ. A 1942 air raid almost led to the end of St. Mary’s, destroying the massive roof and sending its famous bells crashing to the ground. Two of the bells have been left where they fell as a memorial to those who died in the war.

Outside St. Mary’s is an unlikely figure who surprised us–the Devil.

According to legend, when the first stones of St. Mary’s were laid, the Devil questioned the builders and was told the building would be a tavern. He was excited that the “sinful” place might help him recruit a few more souls, so he eagerly helped with construction materials for the building.

As the structure was completed, the Devil realized that the building was meant to be a church, so he tried to destroy it, dropping a boulder near the church. Today, he sits there waiting for people to emerge from the wine bar in the Town Hall a few yards away. But the joke’s on him–the exit for the wine bar is on the opposite side of the building.

The pedestrian street Breitestrasse is a great destination if you’re looking for a momentary break from history. It’s one of the main shopping streets in Lubeck. There are plenty of shops to pause in for bargain hunters and big spenders.

Stop for a snack at Café Niederegger

From the moment we decided to visit northern Germany, we were excited for marzipan. For over 200 years, the Niederegger family has made their famous almond specialty confection in Lubeck.

Marzipan is available all over town, but one of the best places to try it is Café Niederegger just across from the Town Hall in the heart of the city. We stopped by the cafe for marzipan, hot chocolate, and a couple of pieces of their fabulous cakes (we were partial to the apple cake and the Grand Marnier). Visitors can even see their marzipan museum complete with life-sized marzipan figures of everyone from Thomas Mann to Santa.

The interactive Hanseatic League Museum (Europaisches Hansemuseum) traces the roughly 400-year existence of the powerful trading group that influenced Germany and much of northern Europe in the Middle Ages from nearby Hamburg to Norway, Latvia, and beyond.

Visitors to the museum can learn about piracy, wars, diplomatic negotiations, and everything in between from the exhibits and artifacts on display. Rare documents, paintings, coins, carvings, and other collector’s items show how the Hanseatic merchants lived and worked and how Hanseatic cities like Lubeck grew.

Interactive stations enable visitors to follow the development of a particular city or aspect of the League, such as economic relationships, laws, or social dynamics. Fair warning: the museum is very engaging, and it’s easy to spend more time here than you plan to.

If dining while surrounded by history is your thing (it’s ours), stop by Schiffergesellschaft, probably the most well-known restaurant in Lubeck. The space is filled with model ships, massive nautical paintings, and numerous other ocean-related decorations.

Dating from 1535, the historic building where the restaurant is located was once the home of the Schiffergesellschaft, the Seafarer’s Guild, which explains both the decor and why it feels like another era inside. With its dark lighting and long wooden tables, it’s easy to imagine the meetings that used to take place here.

The food is great (try the fish duet), and the Schiffergesellschaft serves the town’s specialty wine, Lubecker Rotspon, which dates back to the 13th century. Then, Hanseatic League ships sailed to France where merchants bought Bordeaux wine. When they returned home to Germany, the Bordeaux aged in Lubeck’s wine cellars where the taste developed differently than in France. It’s fabulous!

One of the places Lance was most excited to visit was the Buddenbrooks House Literary Museum. The house provides the setting to Nobel Laureate (and Lubeck native) Thomas Mann’s famous book about the Buddenbrooks family.

In addition to bringing Buddenbrooks to life, exhibits at the museum tell the personal stories of Thomas, his brother Heinrich, and the rest of the Mann family, whose relationships were often turbulent. Letters, photos, and recordings leave no doubt about the family dynamics and their talent, and they follow the career of Thomas Mann from struggling author to Nobel Prize winner. The museum presents an interesting story–with Lubeck in the background–whether or not you’re a Mann fan.

We visited Lubeck thanks to the German National Tourist Board. All opinions of brilliant architecture and fabulous food are our own. 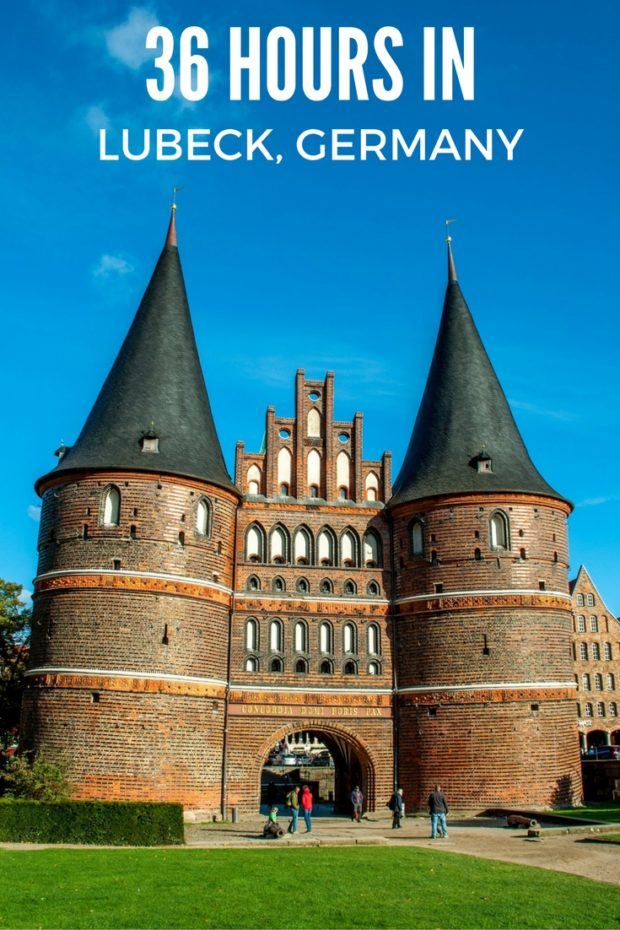