The town of Banska Stiavnica, Slovakia is a jewel in the Carpathian Mountains of central Slovakia (often called the Carpathian Crescent). This small-town is off the main tourist path, but is an amazing specimen of medieval life in the greater Hungarian Empire. These days, the town offers a slower pace of life that is downright serene. However, just beneath the surface, you see how the town of Banska Stiavnica changed the world.

Today, the town of Banská Štiavnica and the Pohronie Region (the Hron River Region) area are visited primarily by Slovaks for weekend getaways, however, the town has a more notable history. It is the oldest mining town in Slovakia and sits atop The Theresa Vein – one of the richest deposits of silver during the Middle Ages. The once medieval mining town has played a transformative role in history of the world.

No other town in the world has contributed more to development of the mining industry. Compared to other towns in Slovakia, Banska Stiavnica was a very wealthy town and received the nickname of Silver Town.

Check the current prices on lodging in Banska Stiavnica

The mountains surrounding Banska Stiavnica and the Pohronie Region were at the eastern edge of the Celtic empire over 2,000 years ago. In the 14th century, Banska Stiavnica was the largest purveyor of precious metals in Europe.

By 1627, mining was a deeply entrenched industry in the mountains around the town. In that year, gunpowder and explosives were used in mining for the first time. This revolution and the many subsequent inventions put the town in the history books. The community is recognized as the Banska Stiavnica UNESCO World Heritage Site, not just for the charming village, but also for the contributions to the mining industry. 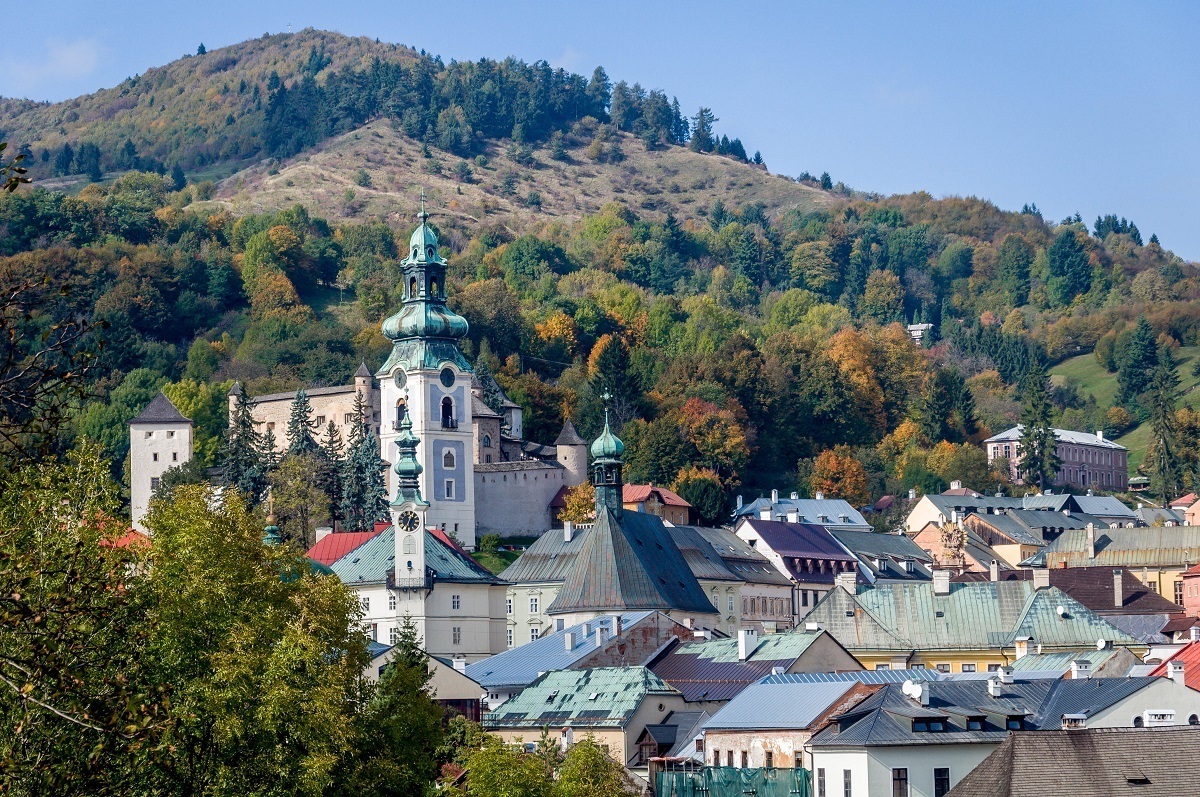 Our guide, Magdalena Valkovicova, took us from our hotel, the Penzion Cosmopolitan II (see additional information below), on a walking tour of the town. We wanted to get a sense of the place and to understand what makes Banska Stiavnica so special:

The Mining and Forestry Academy and the Botanical Garden

Situated on the hill immediately above our hotel on Akademicka road, we learned about the school founded by Maria Theresa in 1762, which still exists today and focuses on using the Slovakia natural resources in a responsible manner. But for centuries, this school focused on the important work of transforming and modernizing the mining and forestry industries that took place throughout the Pohronie Region. Just behind the Academy, the lush Banska Stiavnica Botanical Garden occupies a small plateau and the surrounding hillside. Most impressive for us, they have a giant sequoia – the first time we have ever seen the tree outside of California.

Located just over the hill from the Academy, the Banska Stiavnica Old Castle (In Slovak: “Starý Zámok”) stands guard at the top of the town. Originally a church, it was built into a fortification in 1564 to protect from the Ottoman Turkish invasions. Today, the Old Castle houses a number of exhibits, including a medieval jail.

Below the Banska Stiavnica Old Castle is the heart of the town – the Holy Trinity Square. The tourist information office is located here on the ground floor of the Berggericht – a building with a large mineralogical exhibition. But the highlight of the square is the massive red stone baroque sculpture to the victims of the plague. Even in completely overcast conditions, the Holy Trinity statue seemed to shine.

At the opposite end of the town, the Banska Stiavnica New Castle (in Slovak: “Nový Zámok”) fortification kept watch for invading Turkish forces. The castle has a commanding view of the town as well as the entire valley. 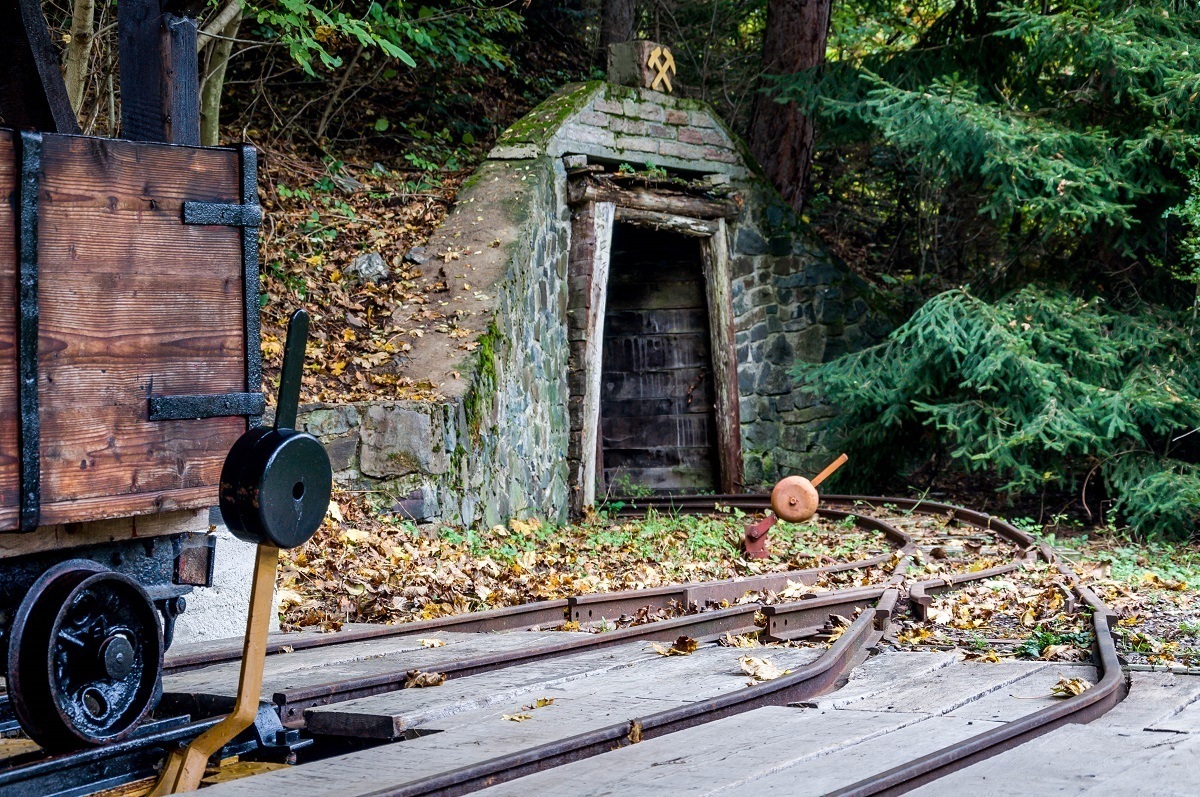 We then drove about a mile out of town to the Slovak Open-Air Mining Museum, where we learned about the technical aspects of mining in the region and how this changed the region. It was also a chance to dress up in bright yellow hardhats and descend deep into the earth to see how the silver was extracted. 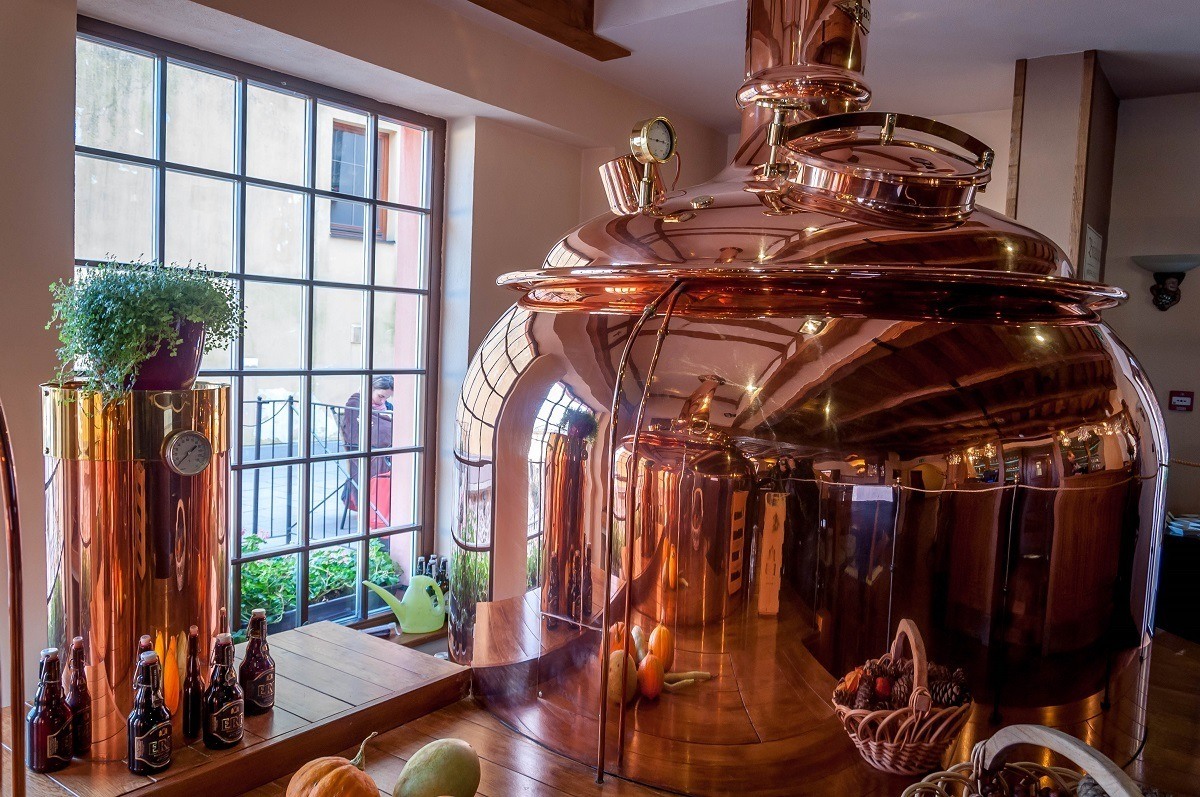 We jumped at the chance to have lunch at ERB Brewery. Banska Stiavnica had a long history of brewing beer, but today there is only ERB Brewery. A modern upstart (founded in 2010), ERB (which actually stands for Eduard Rada Breweries) brews some of Slovakia’s best beers. Compared to massively hoppy brews in other parts of the world, ERB Brewery focuses on classing lagers and darks in the original European tradition. There’s nothing like enjoying frothy brew while sitting next to the mash tun. For lunch, we enjoyed their creative take on Slovakian cuisine with a duo of pork and beef.

One of the benefits of the Pohronie Region is the number of world class spas in the vicinity. We went from Banska Stiavnica to the a neighboring town about 20 minutes away to soak in the hot waters at the Kupele Sklene Teplice spa – this communist era spa traces its roots back to the mid-1800s. It also has a hot springs within a cave (called the Parenica) which is unique in Europe.

The town of Banska Stiavnica makes a great base to explore some of the other UNESCO World Heritage Sites in Slovakia. We used the town to explore the mountainside village of Vlkolinec, Slovakia and also the Wooden Churches of the Carpathian Mountains. 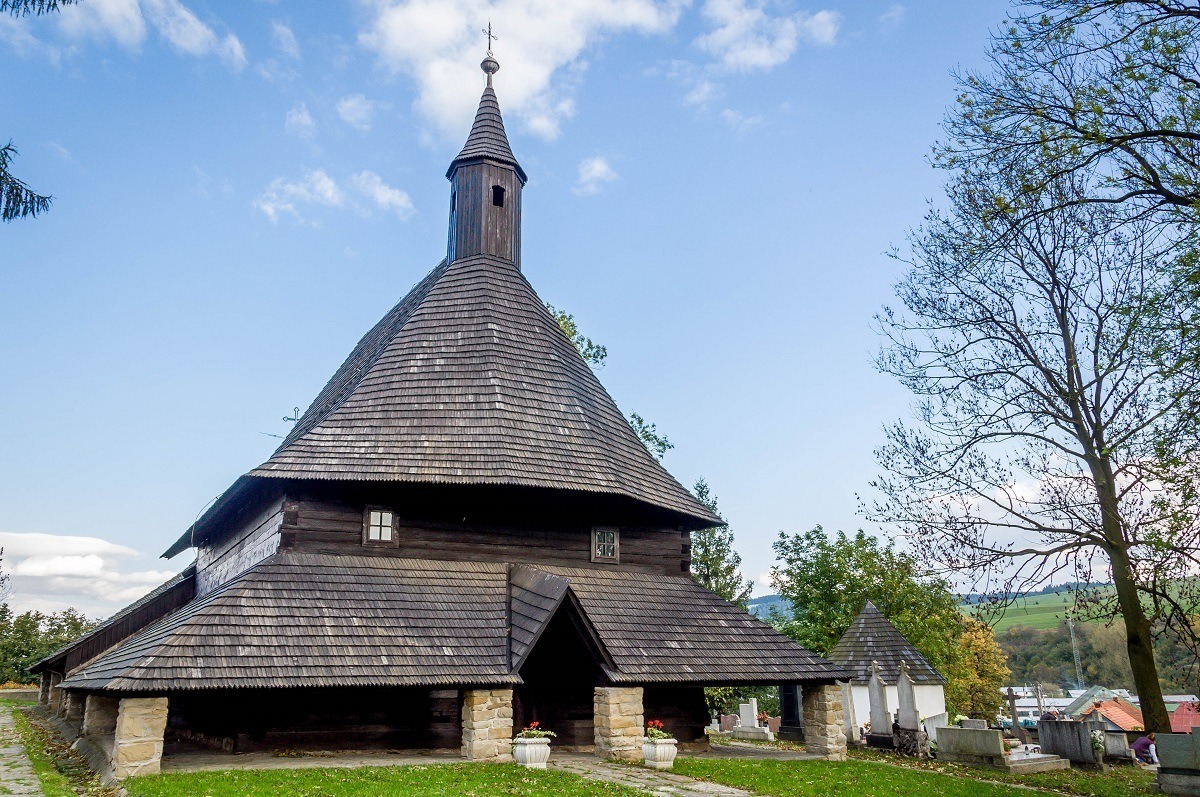 Finally, as we visited a number of churches before we left town, we had a curious observation. Banska Stiavnica was a town of extreme wealth due to its role in silver mining. But that wealth dried up long ago. Until it was discovered by tourists, Banska Stiavnica was preserved through poverty and didn’t modernize. The result is arguably one of the most beautiful towns in Slovakia for us to visit.

And that may be the magic of Banska Stiavnica. The town seems to be from an earlier age. There are over 360 preserved buildings and historical sites in the town. The pace of life seems to creep along. We wandered the historical sites while stopping into quiet cafes for a drink. The town just feels like it is plucked from the past.

Things to do in Banska Stiavnica and the Pohronie Region

The Botanical Garden: Hours from May to mid-September are 8:00am-8:00pm daily and from mid-September to April from 8:00am-6:00pm daily. Located immediately behind The Mining and Forestry Academy on Akademicka road. Admission is free.

The Old Castle: Hours from May to September are 9:00am-5:00pm daily. From October to April, the museum is open Wednesday-Sunday from 8:00am-4:00pm.

The Holy Trinity Square: Accessible 24 hours a day. The square has a free wifi hotspot. The tourist information office is open 9:00am-5:00pm daily during the summer and from 8:00am-4:00pm daily from October-April.

The New Castle: Hours from May-September are 9:00am-5:00pm daily and from October-April from 8:00am-4:00pm on Tuesday-Saturday.

The Seven Wonders of Banska Stiavnica

The town has something they call the Seven Wonders of Banska Stiavnica. These “wonders” highlight both unique aspects to the town as well as quirky plays-on-words. As we discovered, Slovaks love these play-on-words and we encountered it throughout our time in the country.

Being completely honest, we didn’t totally understand some of their Seven Wonders of Banska Stiavnica. However, locals are incredibly proud of their “seven wonders” so we share them here:

These seven wonders of Banska Stiavnica are a bit unusual and some of them seem to be inside jokes, but the residents enjoy talking about their “wonders.”

When it comes to Banska Stiavnica hotels, there isn’t a ton of options. However, when it comes to luxury accommodations in the heart of town, the Penzion Cosmopolitan II is the preferred address for visiting royalty who come to the region. No, really. This inn has hosted kings and queens…and us.

Perched on the corner just below the Mining Academy on Banska Stiavnica’s main street, the Penzion Cosmopolitan II inn has one of the best locations in town. When we rolled into town, we were looking to be treated like visiting royalty. And, like the other royal family, we also stayed in the grand Royal Suite – a massive three room suite that occupies the entire second floor of the hotel. And like that other royal couple, we drank delicious Slovakian wine while we relaxed in our room. This is the kind of life we could get used to!

Perhaps the most unique aspect of the Penzion Cosmopolitan II is the mine. All of the hills around Banska Stiavnica are riddled with mines. Access to the mines was through horizontal tunnels that connect to the vertical shafts. These access tunnels were essentially built into the basements of buildings in the town – including the Penzion Cosmopolitan II. Just behind the reception desk, the hotel has created a wine vault in what was once one of the mine access tunnels. Continuing through the wine vault, visitors can enter a small section of the actual mine tunnel, which has been turned into an art gallery. This is probably one of the world’s most unique art galleries anywhere. The Penzion Cosmpolitan II makes the perfect base to explore the Pohronie Region!

We were expecting to dine on traditional Slovak cuisine. We were completely unprepared for an explosive six-course tasting menu of dishes rooted in Slovak heritage, but leaping into world cuisine. At times, the chef was playful in the use of the ingredients. We started with a “steak” of veal tartar that had a light citrus flavor before enjoying roasted plums with bacon and brandy (a duo of the sweet and the savory).

Since we were in season, the soup was frothy pumpkin cream with “croutons” of seared tuna. The fish course was a Barramundi with sage, fava beans and grapefruit sauce, followed by a meat course of veal and venison in a tarragon butter sauce with traditional Slovak potatoes. A dark chocolate tart with strawberry mousse completed the evening. The meal was deliciously decadent and everything a visiting royal could want. After dinner, we thought about making use of the bowling alley downstairs, but were too tired. Yes, the Cosmopolitan I has a bowling alley in it!

We were the grateful guests of the Slovak Tourist Board. We would also like to extend special thanks to our guide and translator, Magdalena Valkovicova. As always, all opinions and photography are our own.

9 thoughts on “Sampling the Serene Life of Banska Stiavnica”