Growing up in Texas, Dr Pepper (no, there’s no period) was always a part of my life. It was at every cookout and every baseball game. When I was young, we drove past a bottling plant every day on the way to school. On a recent road trip through the Lone Star State, I just had to stop at the Dr Pepper Museum in Waco to learn a little more about this Texas classic.

In the South every type of soda is called “coke,” even in Texas, the home of Dr Pepper. But make no mistake, the old red-brick bottling plant in downtown Waco that now houses the museum is 100% focused on the local creation. Dr Pepper is actually one year older than Coca-Cola, and although its museum is somewhat less flashy than the Coke museum in Atlanta, its history is no less rich. 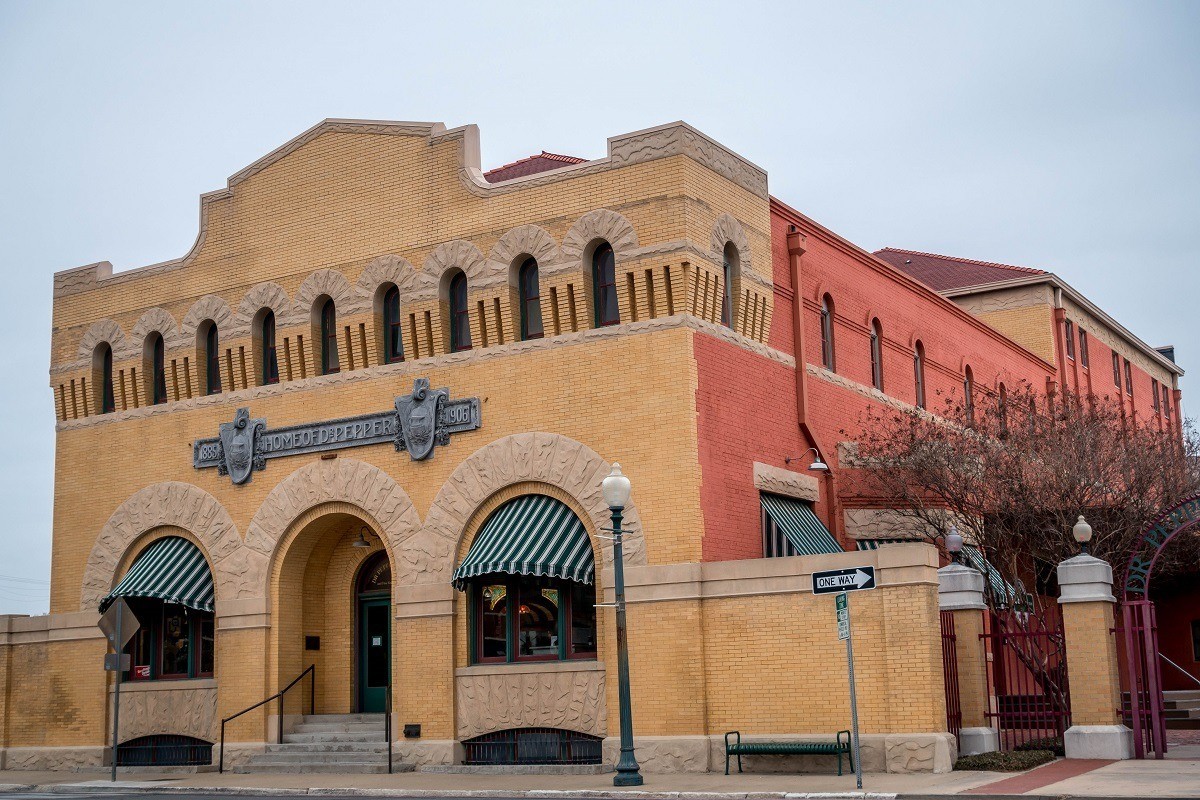 In 1885, pharmacist Charles Alderton invented the beverage at Morrison’s Old Corner Drug Store. A mix of syrup and carbonated water, the 23-flavor concoction was an instant hit. Called a “Waco,” the drink was billed as “tasting like the drugstore smell,” which is a pretty unappealing marketing strategy, if you ask me. But it worked. A wax figure of Mr. Alderton tells you all about it in the museum’s first exhibit.

A few of the vintage coolers on display

Alderton sold the recipe to Wade Morrison, the store owner, who changed the drink’s name to Dr Pepper. Morrison and a partner founded the Artesian Bottling and Manufacturing Company in 1891 to support their new product. In 1904, Dr Pepper was introduced to a national audience at the Louisiana Purchase Exposition (aka the St. Louis World’s Fair), and its popularity took off. 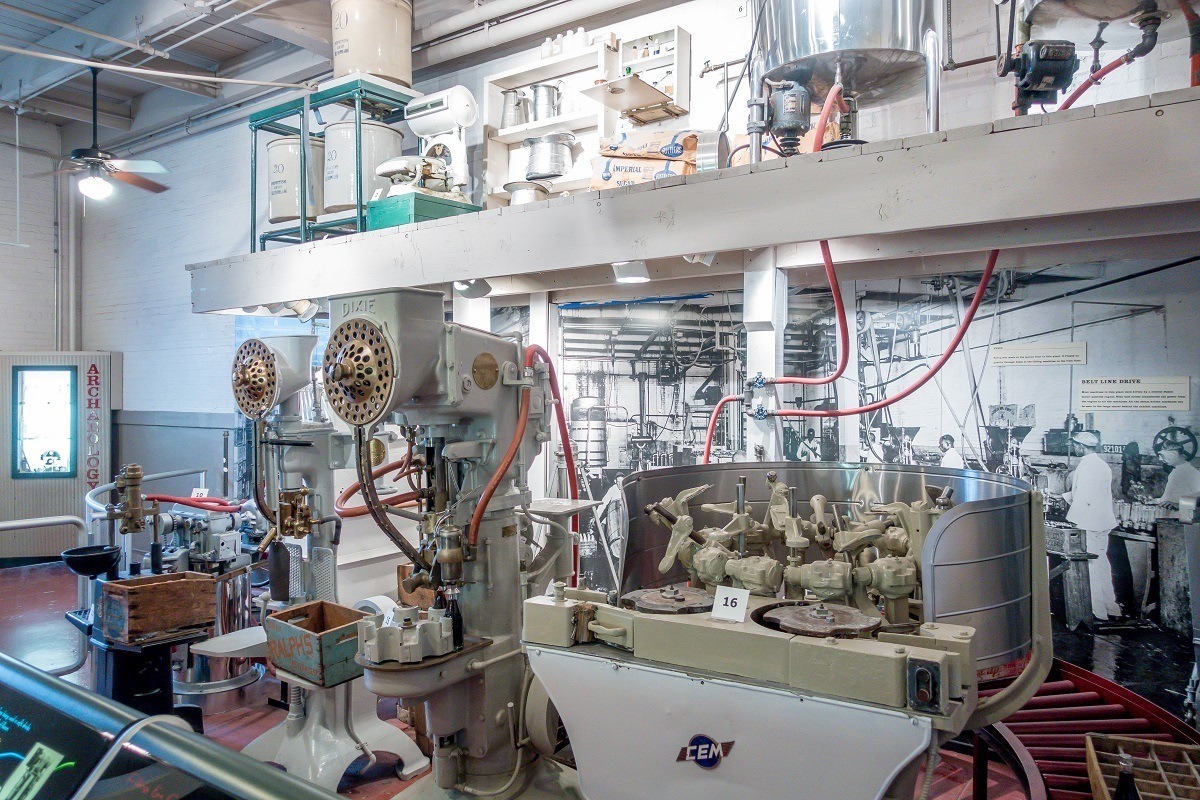 The bottling line features prominently on the first floor

The three floors of exhibits cover nearly everything that has happened with the brand since its national launch. The recreation of a Dr Pepper bottling line shows how the product was mixed, bottled, and packaged in this building until 1965, when aluminum cans became popular. Old delivery trucks inside and outside the museum demonstrate how the product made its way around Texas and the US over the decades. Throughout the museum, signs, coolers, and all kinds of memorabilia trace the evolution of Dr Pepper’s marketing and cultural appeal. 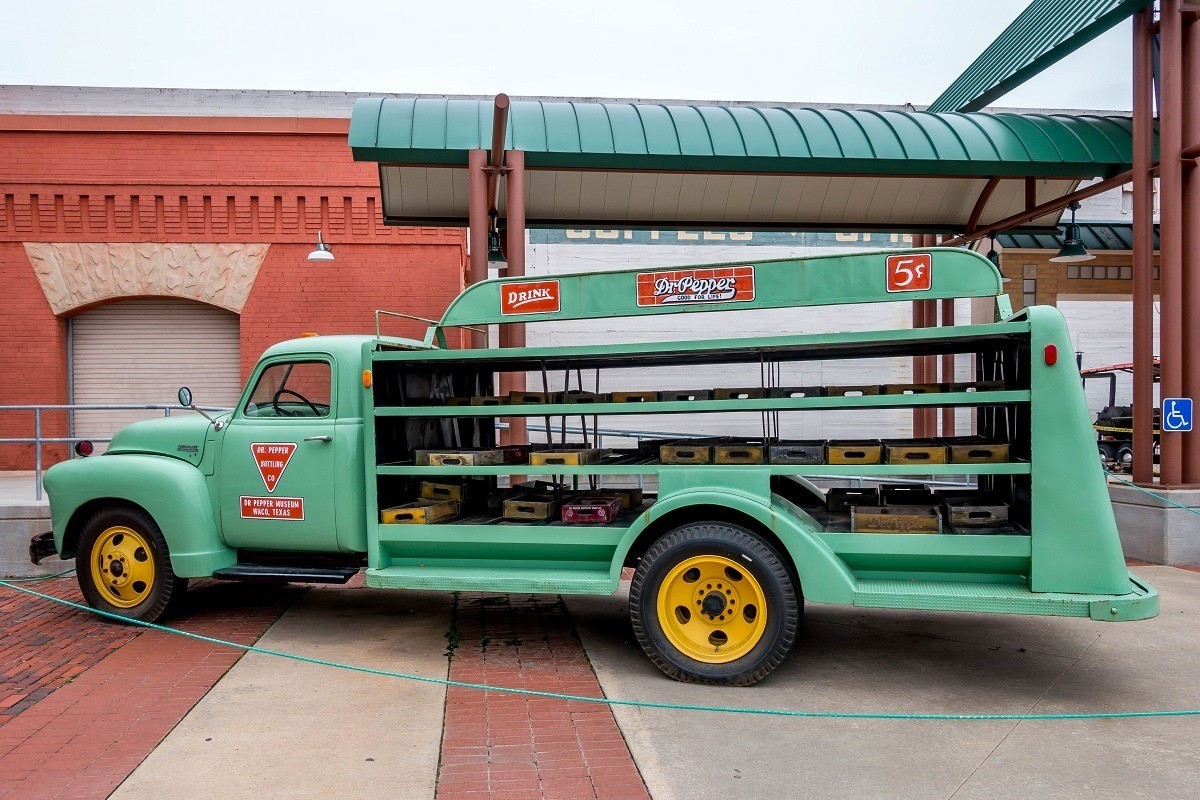 A delivery trucks greets visitors at the museum’s entrance 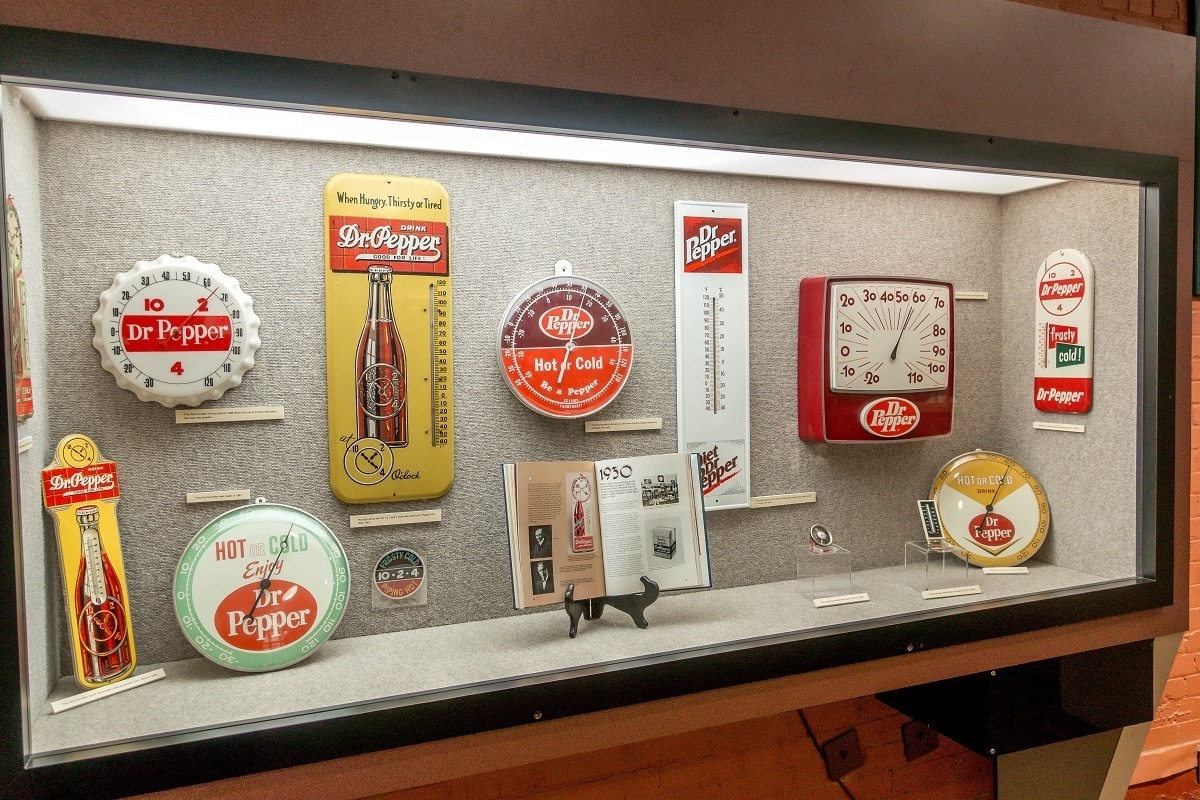 There’s no shortage of Dr Pepper clocks and thermometers

Part of the second floor is dedicated to advertising campaigns with vintage posters and items showing the different faces of the brand. From 1940s Peggy Pepper to 1950s Frosty Dog and actresses and actors that have promoted Dr Pepper since, the exhibits show the links between the advertising campaigns and changes in America’s culture through the years.

There is also an interesting look at product placement in movies, which includes an impressive collection of life-size cut-outs and displays. 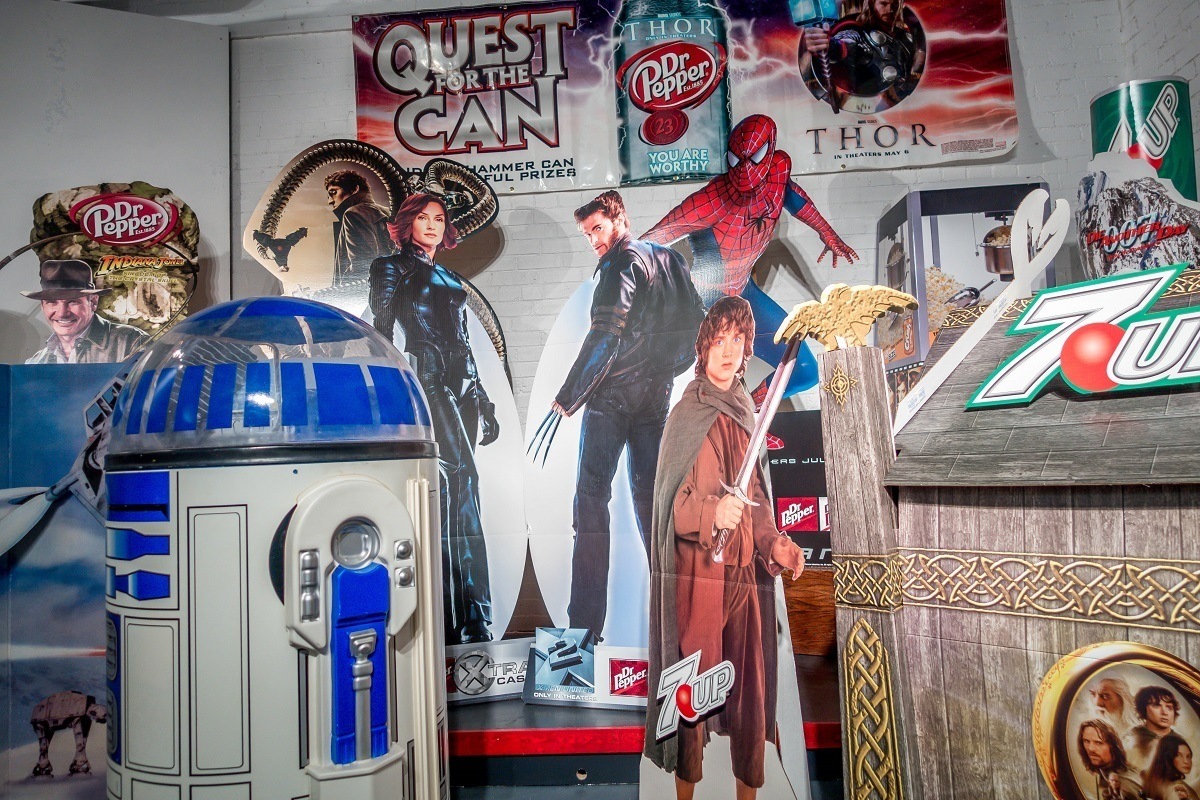 Just a few of the movie promotions

The third floor of the Dr Pepper Museum in Waco is dedicated to former CEO W.W. “Foots” Clements and includes the Free Enterprise Institute, named in his honor. Clements started as a salesman for the company in 1935 and worked his way up to CEO over the course of the next 35 years by treating “every human being as a potential customer.” The Free Enterprise Institute is a day-long program that teaches students about economics and what goes into developing a business and a brand. 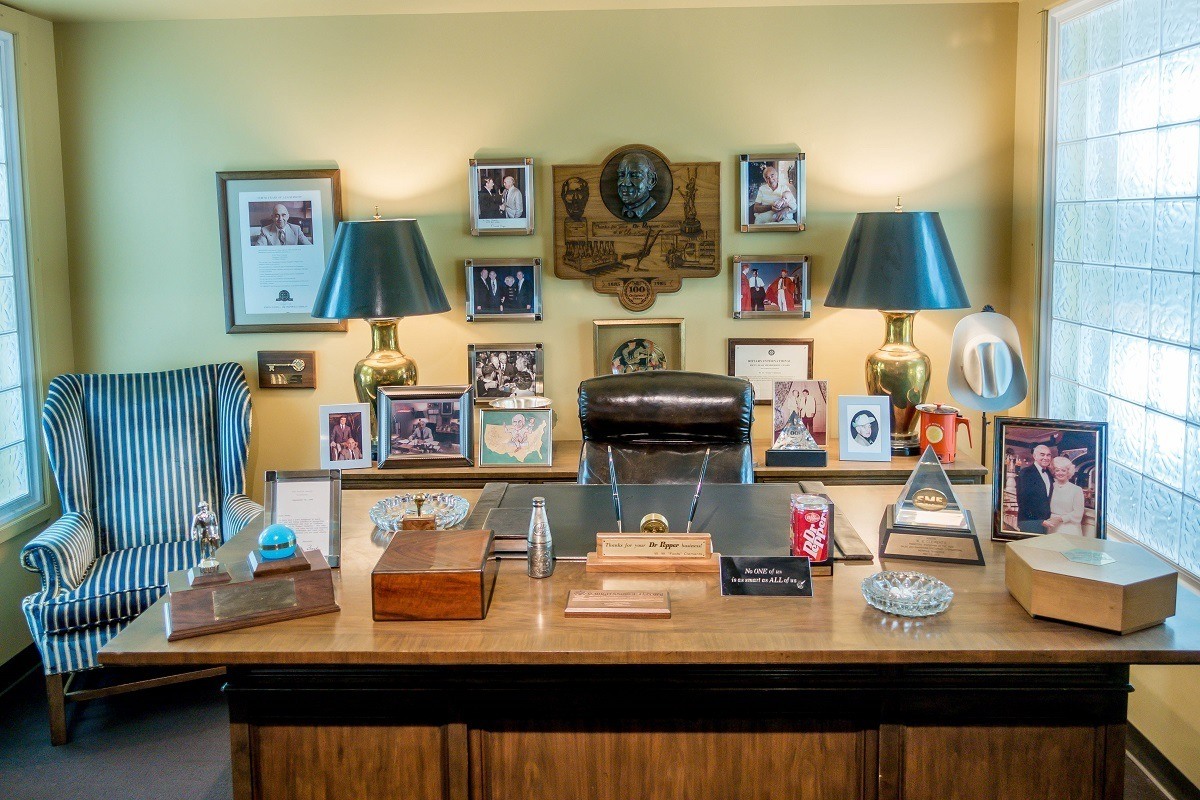 Perhaps the most popular area of the Dr Pepper Museum is the soda fountain. Thirsty visitors can indulge in old-fashioned sodas made from syrups and carbonated water along with different snacks. I had the popular Dr Pepper float made with hand-mixed soda and Blue Bell ice cream, another delicious Texas mainstay.

Making it the old-fashioned way at the soda fountain

Waco is approximately 1.5 hours south of Dallas and 1.5 hours north of Austin. If you’re interested in other beverages while you’re in town, check out the famous Balcones Distilling.

The Dr Pepper Museum is open 7 days per week–10:00am-5:30pm Monday through Saturday and 12:00pm-5:30pm on Sunday. Adult admission is $10, and children can visit for $6. It’s not necessary to buy a ticket to the museum in order to visit the soda fountain.

Recently picked up an all original Dr Pepper cooler/dispenser. It has the coin operated drinking fountain bubbler on the side and comes complete with all the racks inside. I am having a hard time finding the exact one online. I just want to know what it’s worth? It’s a cool piece, I just don’t know much about it.

Hallo i drink dr.pepper for almost30 years and its still my favorite drink. I am a diabetic for 20 years now due to wrong times working and wrong times eating. My weight is around 100kilo. So thats not so special. I live in the netherlands and i am 60 now. I cant by dr.pepper zero overhere but the internet is great. So i order them and het my dosis dr.pepper zero. For me its the best tasting drink there is.when i go on holiday i always look for it. well good Luck all.

Thank you Dr. Pepper for all y’all do! I’m an addict to Dr. Pepper I drink a 12pk a day and I have a vintage Dr.pepper machine operational, I have been a Pepper addict for over 17yrs and no plans to stop but I’m forced to slow down due to shortages, I need to purchase a pallet so please tell me where!

Thank you all again Stay safe!

Given that Coca Cola World in Atlanta was one of my highlights last time I went to the USA, I think I NEED to visit this place. And now I'm craving a Dr Pepper, which isn't great because it's midnight where I am! Great and fun post.

Thanks, Jo. The Dr. Pepper Museum is much smaller than its Coke counterpart, but it's a very fun visit :)