One of the really interesting things about Italy is that each region has its own cuisine. While there are some commonalities—like pizza, thank goodness—there are significant differences in what’s traditional and readily available on menus in different areas of the country. The region of Liguria on Italy’s northwest coast and its capital, Genoa, have a cuisine that reflects the people’s history as mountaineers and sailors. Simple, local foods like wild herbs, fresh cheeses, vegetables, and fish started out as the food of the working people but have become sought-after staples of the Mediterranean diet. Here’s a look at some of the more traditional Genoa foods we tried. 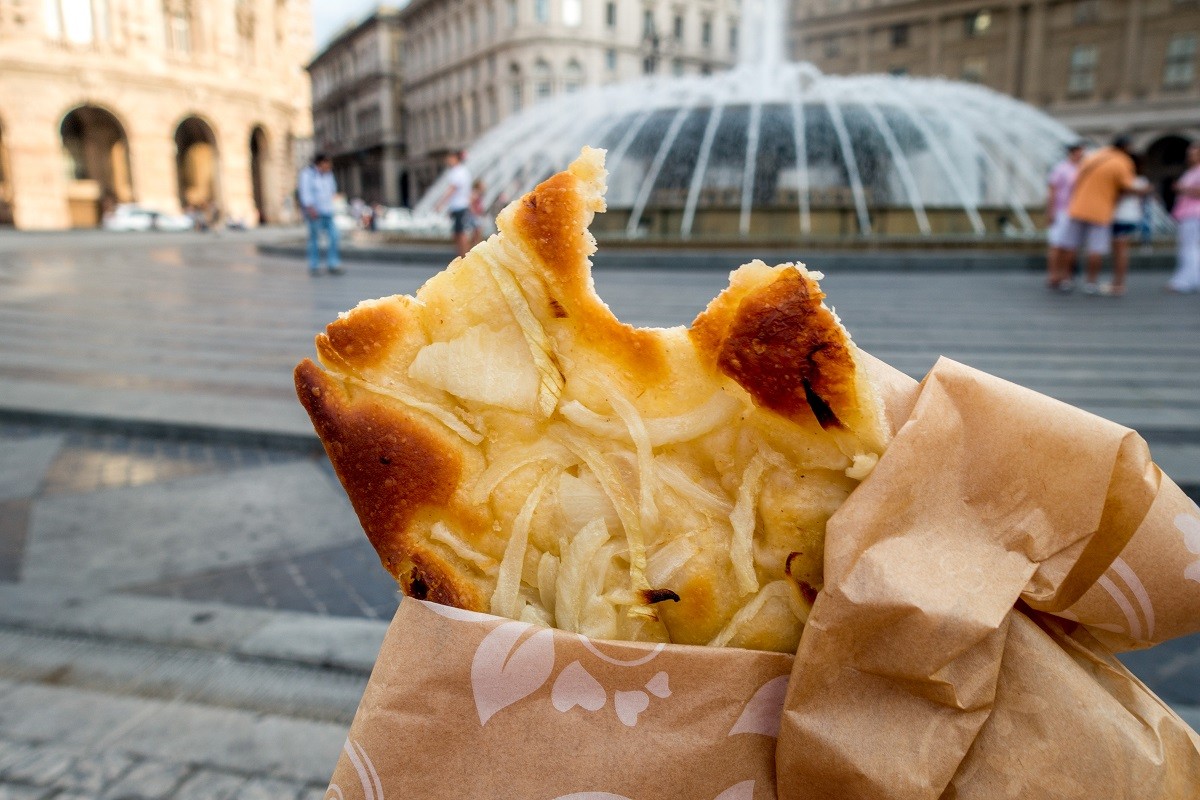 Classic focaccia Genovese is a simple combination of soft and hard wheat flour, yeast, oil, water, and salt. But like most Italian foods, the simplest things are the best. Somehow, in Genoa, bakers can turn these basic ingredients into one of the tastiest Ligurian specialties. The most common and traditional versions are plain or topped with onions or olives.

I’ve always thought of focaccia as strictly an evening food—an appetizer at dinner like bruschetta. Unsurprisingly, I’ve been wrong. In Genoa, focaccia is often eaten at breakfast with coffee (best straight from the oven, of course), but it’s also common as an afternoon snack or as a replacement for other bread at dinner. We were lucky to grab some of the last slices of the day from Antico Forno della Casana in the historic center, and it was amazing. 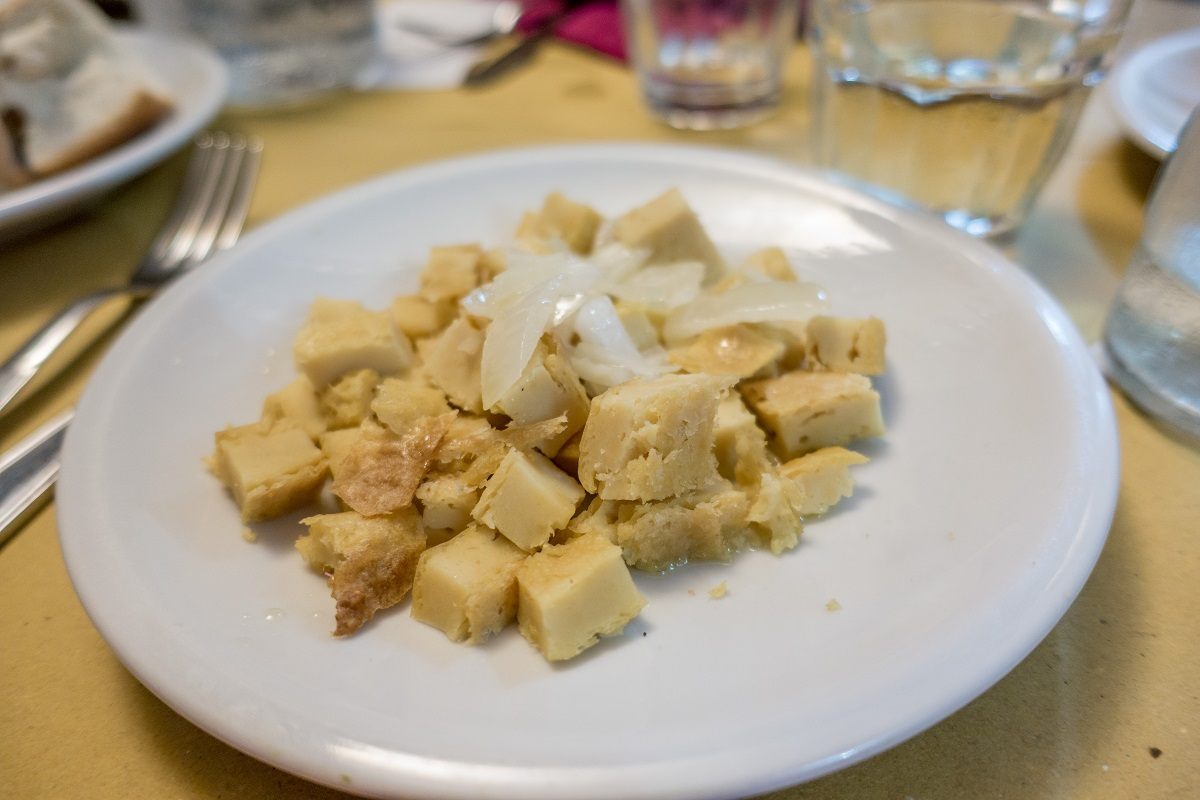 Dishes made from chickpea flour are common in Genoa. One very popular Genovese food is panissa. The mixture of chickpea flour, salt, garlic powder, oregano, and pepper is slow-cooked and stirred into a thick paste. After it sets, it’s sliced and fried in olive oil. I expected it to be similar to French fries, but the type we tried was softer and topped with sautéed onions. While it was good, we weren’t racing back to have more.

Fish of all kinds

Thanks to its location right on the Ligurian Coast, Genoa restaurants and eateries feature lots of fish dishes. Acciughe (anchovies) are popular lightly fried and topped with sea salt, marinated in lemon juice and olive oil, in soups, or in just about any other preparation you can imagine. Another snack is a local specialty known as friscieu. These fried batter balls filled with herbs and whitebait are common at aperitivo or from shops specializing in fried foods. While not a personal favorite, baccalà (salt cod) is super popular as is a basic fritto misto (mixed fried seafood). When it comes to fish, options are endless. 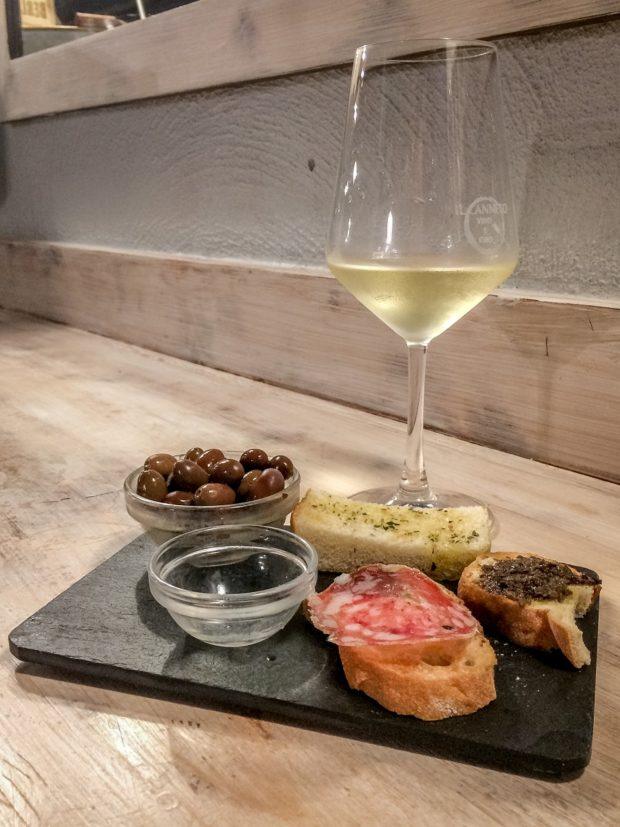 The custom of aperitivo isn’t unique to Genoa, but this evening ritual is important to know about when you visit. For about the price of one drink (€8 or so), you get an adult beverage and help yourself to an assortment of heavy appetizers that are often enough to substitute for dinner. From about 6-9pm, most bars serve a variety of meats, cheeses, breads, and more, sometimes even including dessert.

In other Italian cities we’ve visited, you serve yourself, but in Genoa, we found a mix of self-serve buffets or set offerings delivered by a server—likely to dissuade people from eating way more than is covered by buying one drink. In general, though, you can continue to snack as long as you have a drink in your hand. 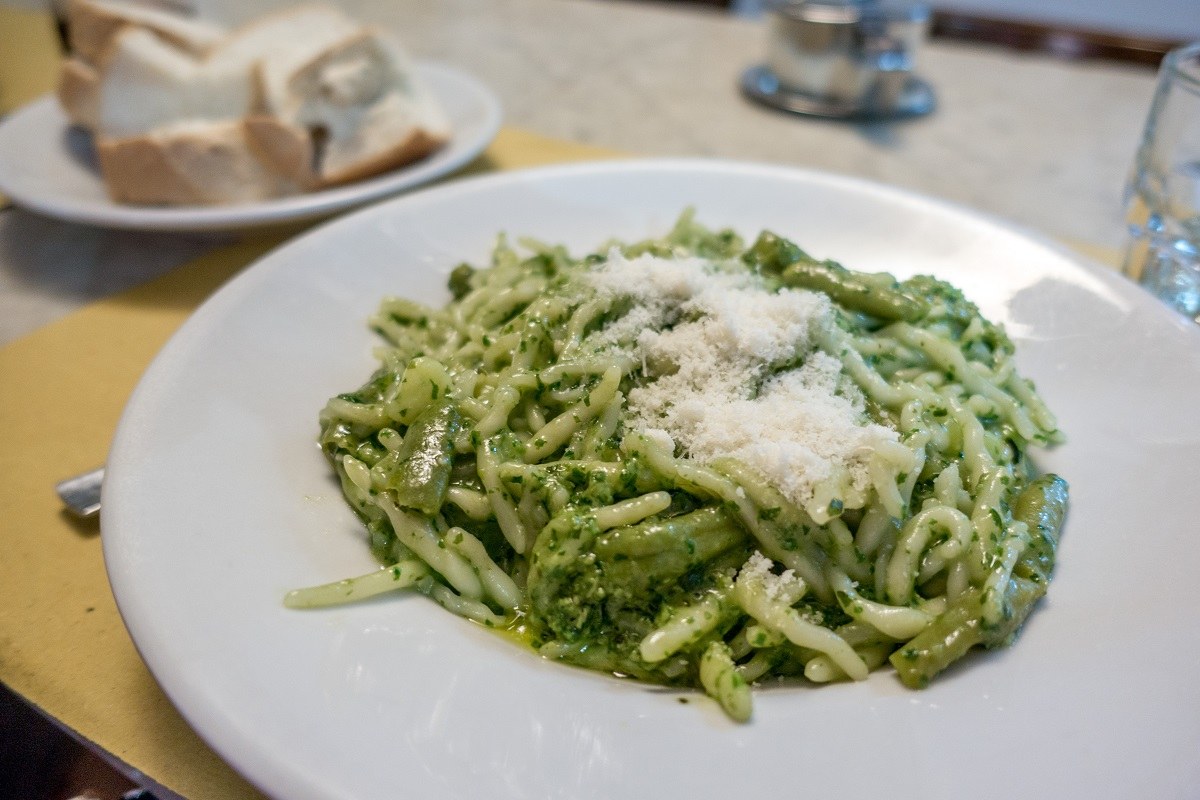 We absolutely love pesto. In fact, wanting to grow basil was one of the main reasons I started a garden several years ago. There’s something so fresh about pesto—not just in the literal freshness of the basil itself but in the brightness of the flavors of the sauce that just taste like summer. Needless to say, we had to try pesto in Genoa.

The recipe for Genovese pesto is similar to any other pesto recipe, but it uses very specific ingredients—there’s no “parmesan” from a can here. It’s made from Genovese basil (the proper type comes from the district of Pra’), extra virgin olive oil from Liguria, Parmigiano-Reggiano cheese, Sardinian pecorino cheese, pine nuts, garlic, and sea salt. It’s straightforward and utterly delicious. Near our Airbnb, the restaurant Cavour 21 boasted that it has some of the best pesto in Genoa, so it seemed like the perfect place to try the dish. Our trofie al pesto (trofie is a short, twisted pasta) and lasagna al pesto could not have been better. 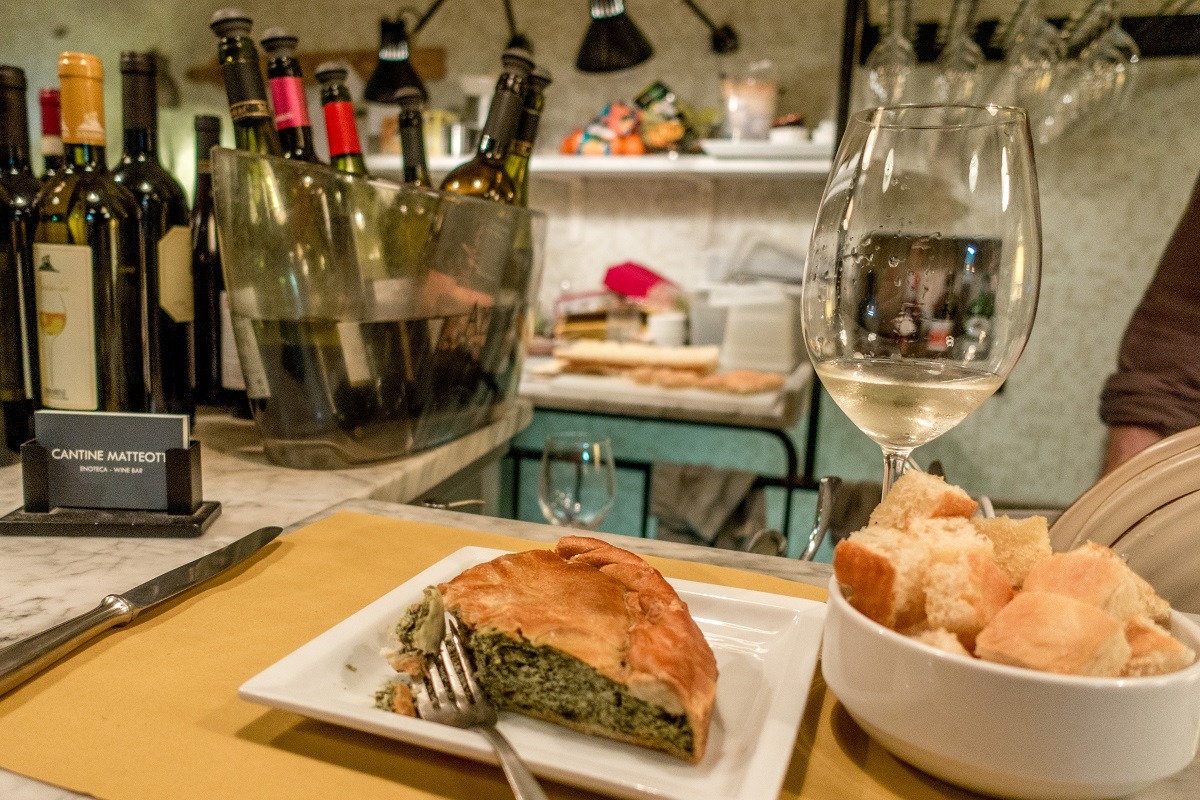 If you can’t decide what to eat in Genoa, it’s almost impossible to go wrong with a torte di verdure (vegetable cake). In fact, Genoa and the Italian Riviera are famous for these tortes that have their origins in the days when Genoa was a maritime republic. Puff pastry shells are filled with fresh cheese, eggs, and aromatic herbs and spices. The vegetables inside change depending on the season but often include chards, spinach, artichokes, potato, onion, squash or pumpkin.

The variety and simplicity of the tortes means they please just about everyone. We loved the spinach option at Cantine Matteotti, paired with one of their highly affordable wines, of course. 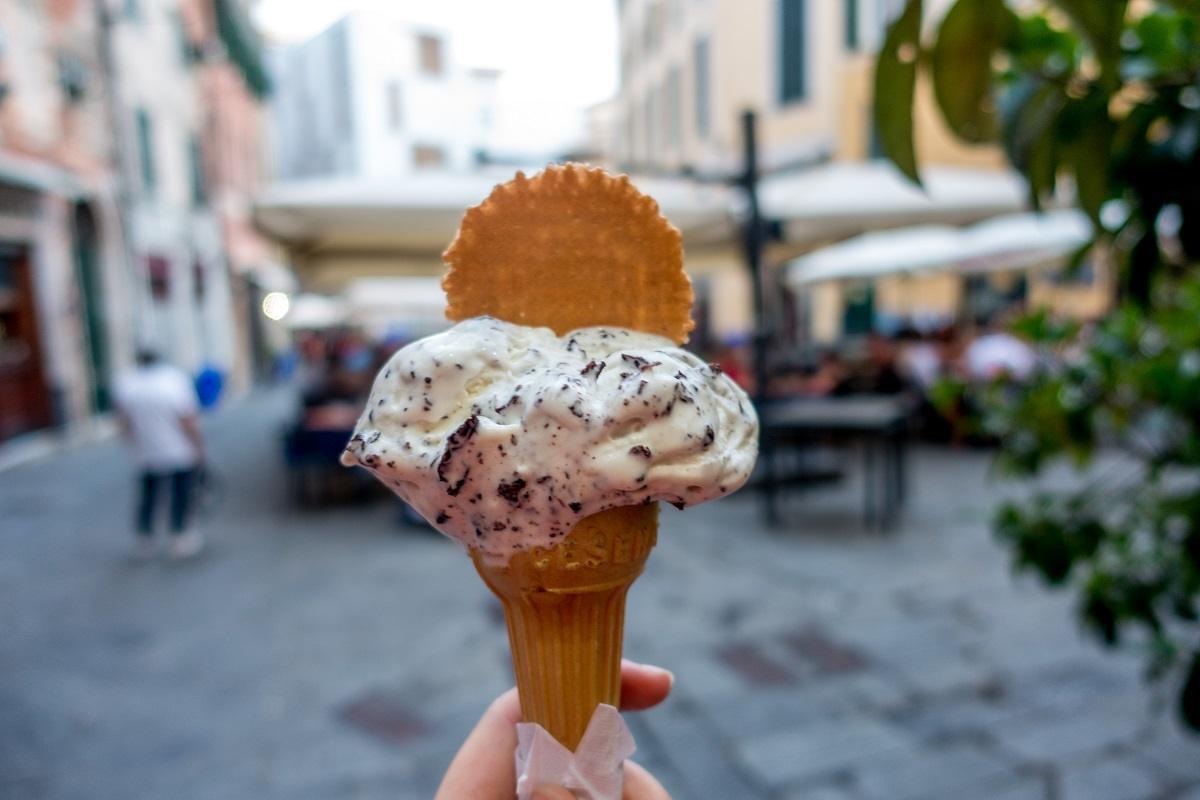 Because you can’t write about Italian food and not include gelato. Our favorites were the stracciatella (i.e., chocolate chip) and chocolate at La Cremeria delle Erbe.