Most advice about Athens, Greece, says that you can see all there is to see in this enormously historic city in one day or two days at the very most. They recommend the Acropolis, walking through the Plaka, maybe a museum, and then moving on to whatever is next. And while one day will hit the highest of the highlights when your schedule is tight, there’s more to see in Athens than that. With a little more time—like 3 days in Athens—you can explore the neighborhoods, try the food, and really get a sense of place beyond the bucket list items. Here’s what to do in Athens in 3 days. 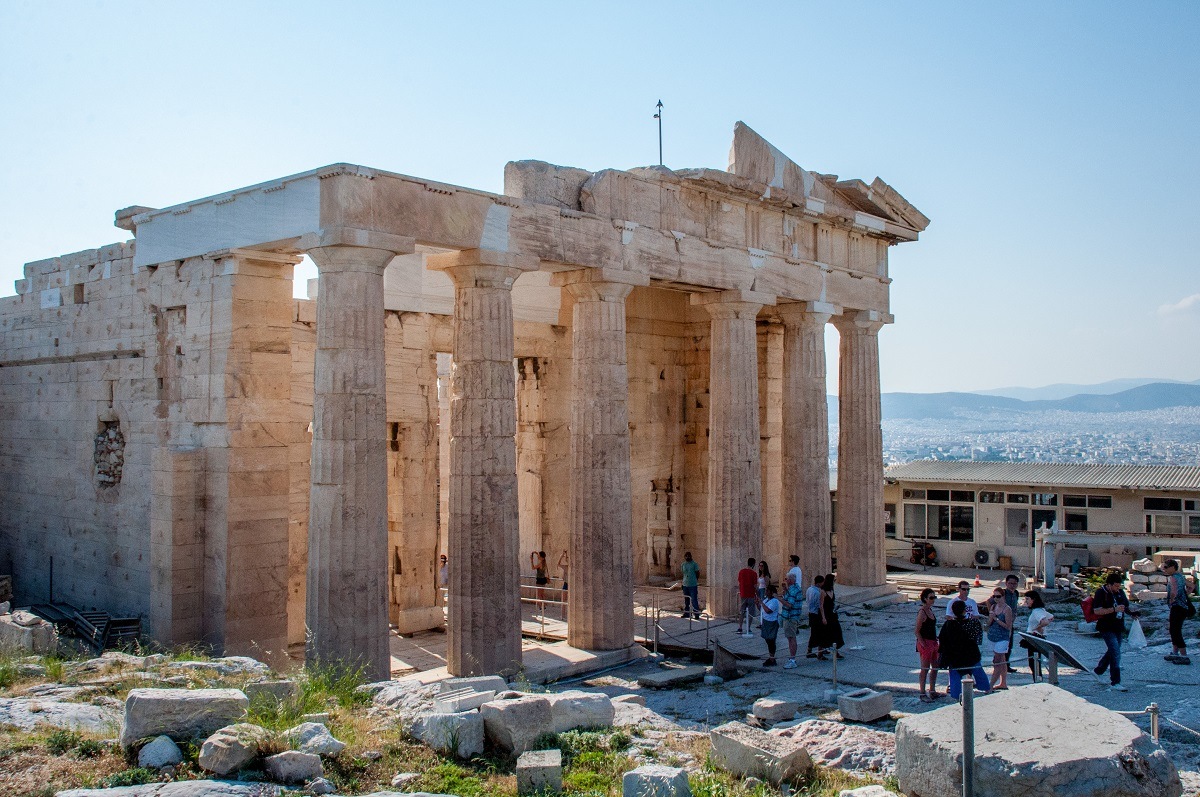 The Acropolis was our number one priority during our 3 days in Athens, so we put it first. All the advice we’d read said that it gets a little toasty and more than a little crowded up there during the day, so the best times to visit are in the morning or evening. The crowds are smaller and the temperature is cooler then. We followed that advice and weren’t disappointed.

Although you can see the Acropolis, a UNESCO Wold Heritage Site, from many places in Athens, it’s absolutely worth a trip up to the top to see the buildings up-close. This massive rock became a religious center over 3000 years ago and, like the Oracle at Delphi, was sacred to the Ancient Greeks.

The centerpiece of the Acropolis, the Parthenon, was dedicated to the goddess Athena and completed in 438 BC. Over the centuries, the temple has been used as a Christian church, a Roman Catholic church, and a mosque. It’s been burned, suffered explosions, and was pillaged. The fact that it still stands at all is kind of a miracle. The current restoration project (which has been ongoing for decades) involves a lot more scaffolding and cranes than we’d expected, but when you think about what the Parthenon has been through, it makes sense. 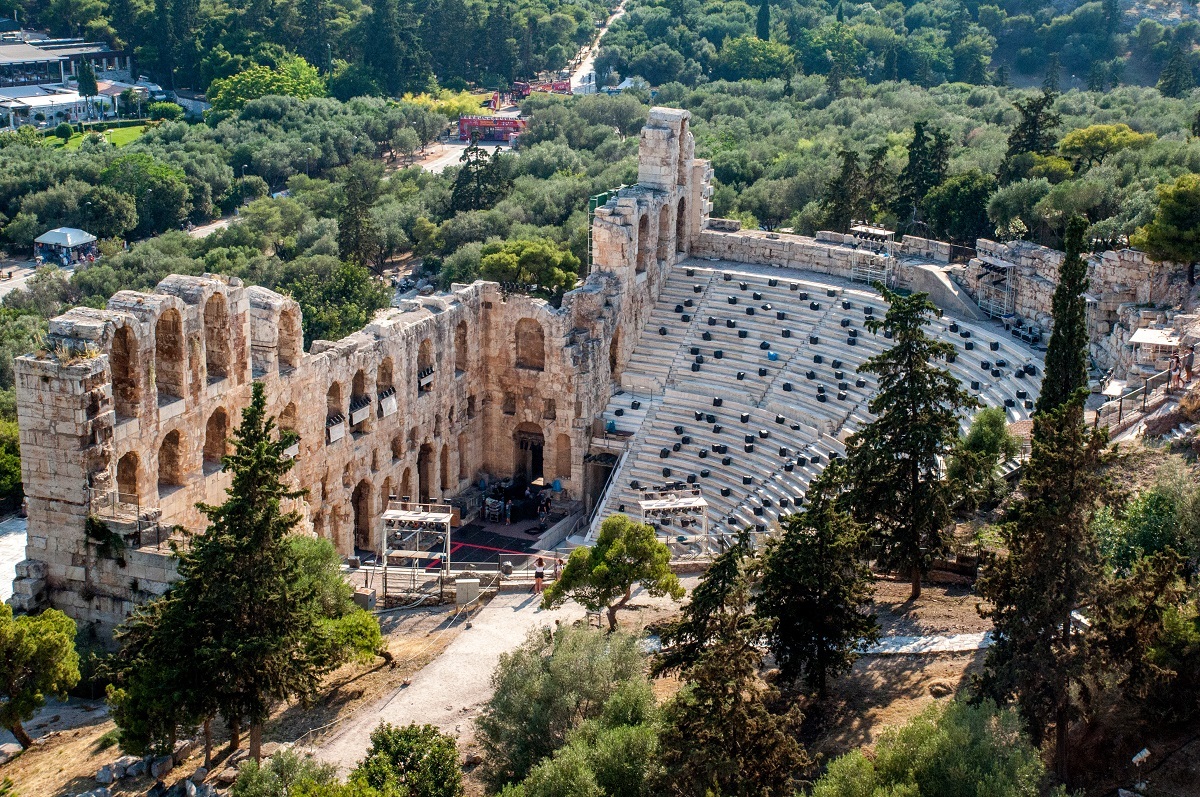 More than any other monument, the Parthenon epitomizes the glory of Ancient Greece. It’s the largest Doric temple ever completed in Greece, and the works it housed are considered some of the best examples of Greek art. Although what’s visible today is a shell of what the Parthenon once was, it’s still spectacular.

In addition to the Parthenon, you can also see the 1900-year-old Theater of Herod Atticus, which still holds performances, and the Erechtheion, a temple completed in 406BC that features the spectacular Porch of the Caryatids.

Wondering where to stay in Athens?

You’ll find more details about where to stay in Athens at the end of this article.

Near the Acropolis, the Acropolis Museum is one of the top sites in Athens. While visiting the Acropolis gives you the sense of place and the authenticity of walking in the footsteps of Greeks from 3000 years ago, the museum is the home of what remains of the works of art in Greece.

After centuries of natural disasters, pollution, and the intervention of men (a British Earl removed many major works in 1801, which are now on display at the British Museum), the Acropolis Museum is the perfect showcase for the outstanding sculptures and friezes. I have to confess that we briefly considered not visiting—I thought we’d seen enough at the Acropolis itself—but that would have been a mistake. 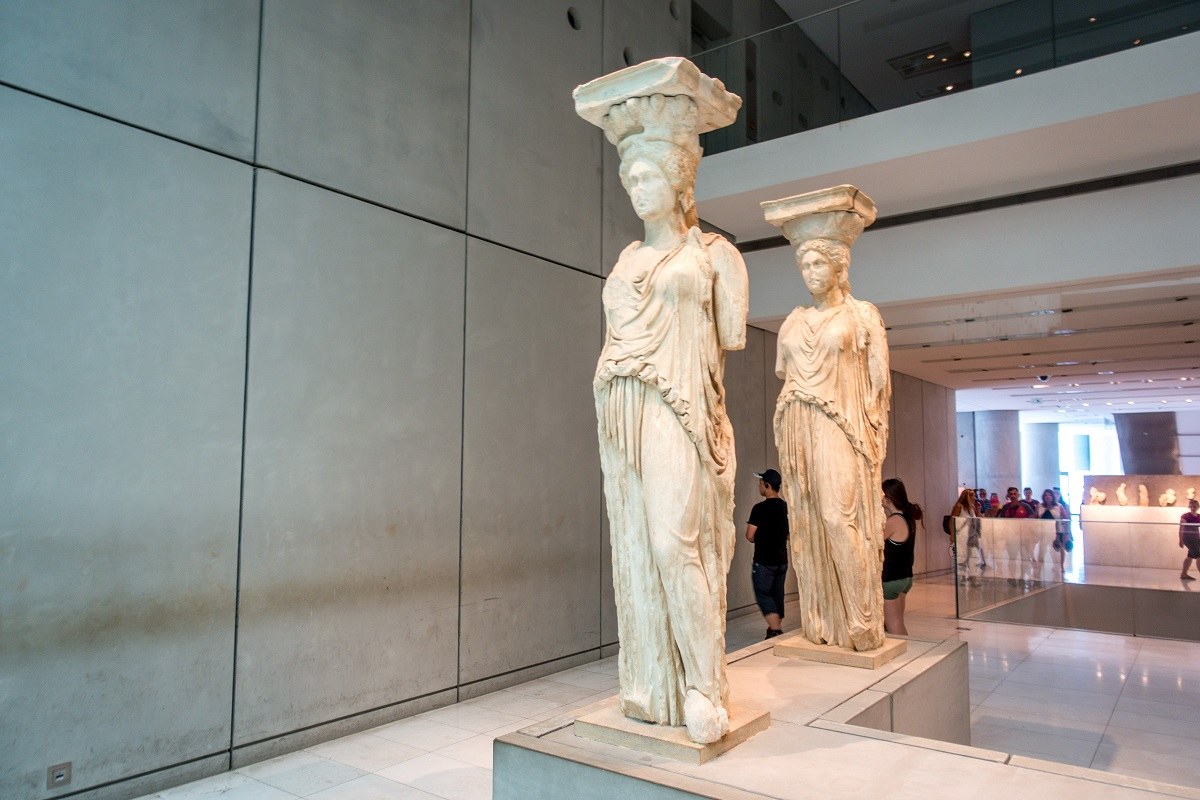 Exhibits include painted vases, offerings to the gods, bronze figurines, statues, and hundreds of other artifacts. Some of the most interesting displays focus on 6th-century kore—statues of young women in draped robes with elaborate braids—and the restored Caryatid statues. The top floor houses the Parthenon’s 525-foot-long frieze, mounted as it was in the temple. It depicts the Panathenaic Procession, interspersed with plaster replicas of the missing pieces now in Britain.

The Acropolis Museum also provides great views of the Acropolis from its café, which is an ideal place to eat and rest your feet before continuing on. 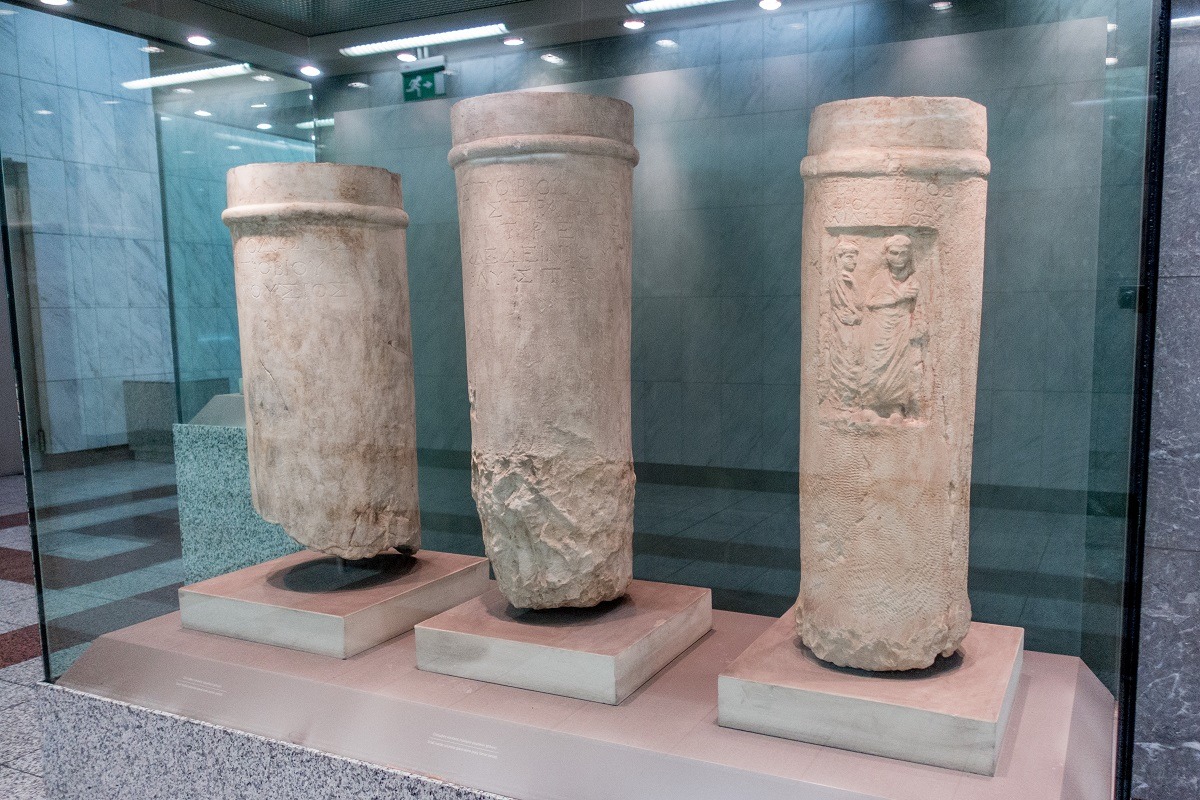 Explore underground at the metro stations

It’s impossible to dig in any ancient city without uncovering something important. As a result, one of the more unexpected and unusual places to see in Athens is actually below ground—the metro system.

When the tunnels were built for the subway, many archaeological artifacts were uncovered in the layers below the modern city. Archaeologists worked alongside the metro engineers and construction teams to uncover thousands of artifacts (some estimates range as high as 50,000) from the city’s long history. Some of the artifacts are on display in the Syntagma, Acropolis, and Monastiraki metro stations. 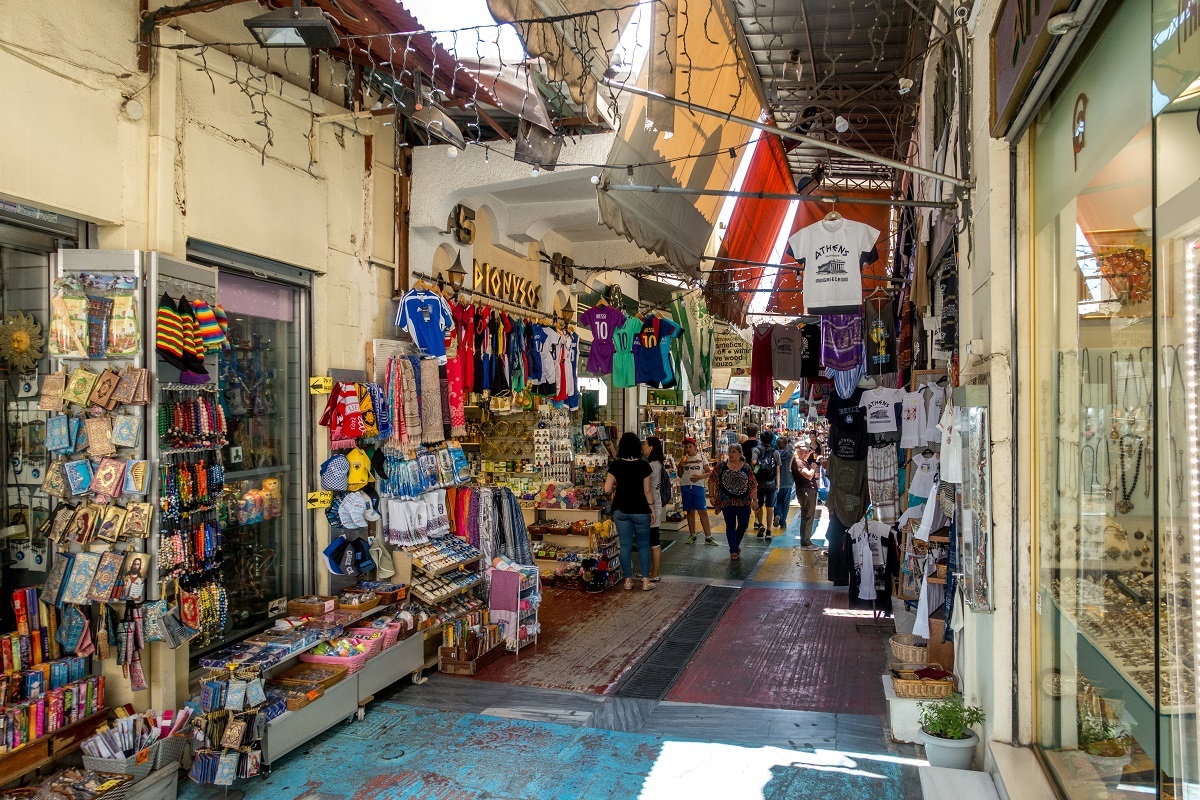 Stroll through Plaka and Monastiraki

Getting just a little bit lost is one of the best things to do in Athens, and the city’s oldest neighborhoods are a perfect place to do that. Take a stroll through Plaka and Monastiraki, especially in the early evening, exploring the zigzagging streets and narrow staircases.

You’ll pass the Clock of Kyristos, the Roman Agora, and the Library of Hadrian as well as hundreds of shops featuring everything from local food products to kitschy souvenirs. You can even take a slight detour and walk part of Ermou, Athens’ higher-end shopping street. On your walk through the neighborhoods, stop for an affordable and delicious dinner at an ouzeri. We liked Scholarhio in the Plaka. 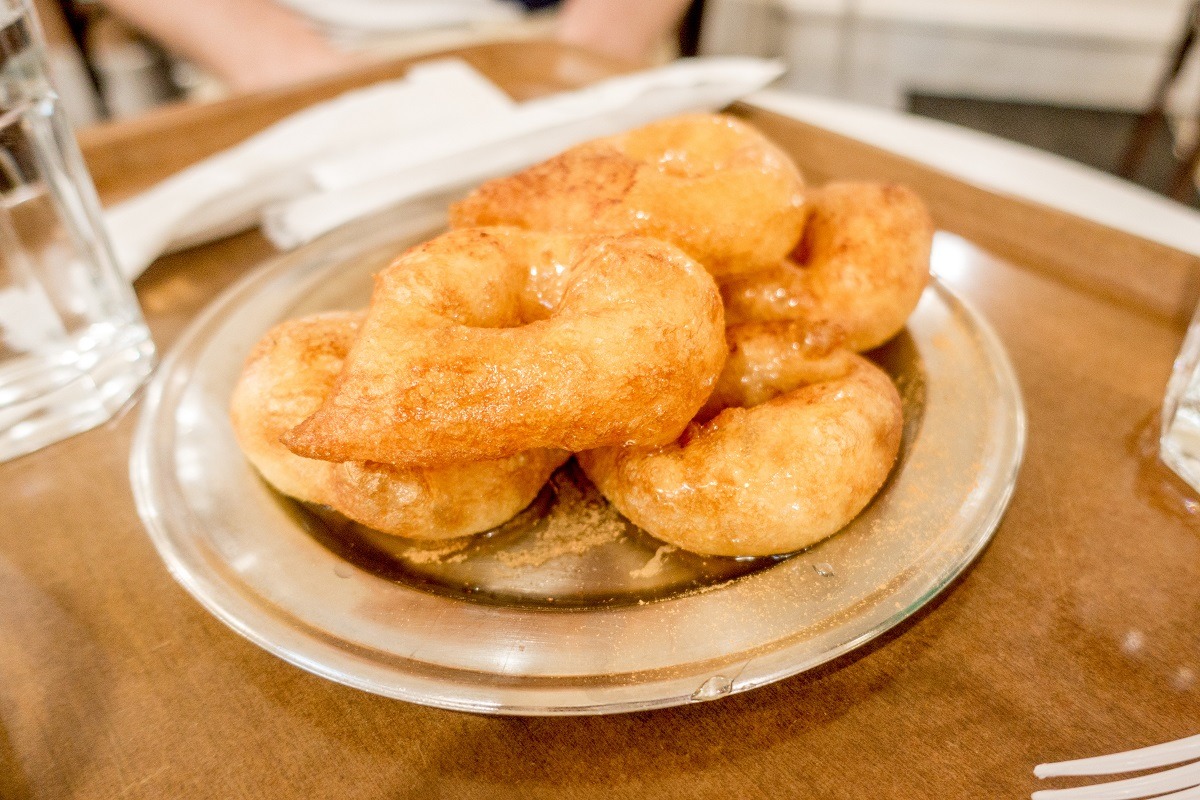 Indulge on an Athens food tour

After getting the lay of the land on day 1, we decided to spend our second of 3 days in Athens doing one of the things we love most on a trip—eating. For over four hours, we wandered through the heart of the city with our guide Elena trying all kinds of local Greek foods on a food tour of Athens.

On our food tour, we tried koulouri, a simple pretzel-ish, bagel-like pastry that’s commonly eaten for breakfast, and we sampled sweet loukoumades, a treat which was given to winners in the ancient Olympics. There was also strong Greek coffee and rice pudding made with buffalo milk, among many other treats. With everything we tried, we were grateful for the walking in between stops that took us to some neighborhoods we probably wouldn’t have seen otherwise. It’s always great to explore a city with a local. 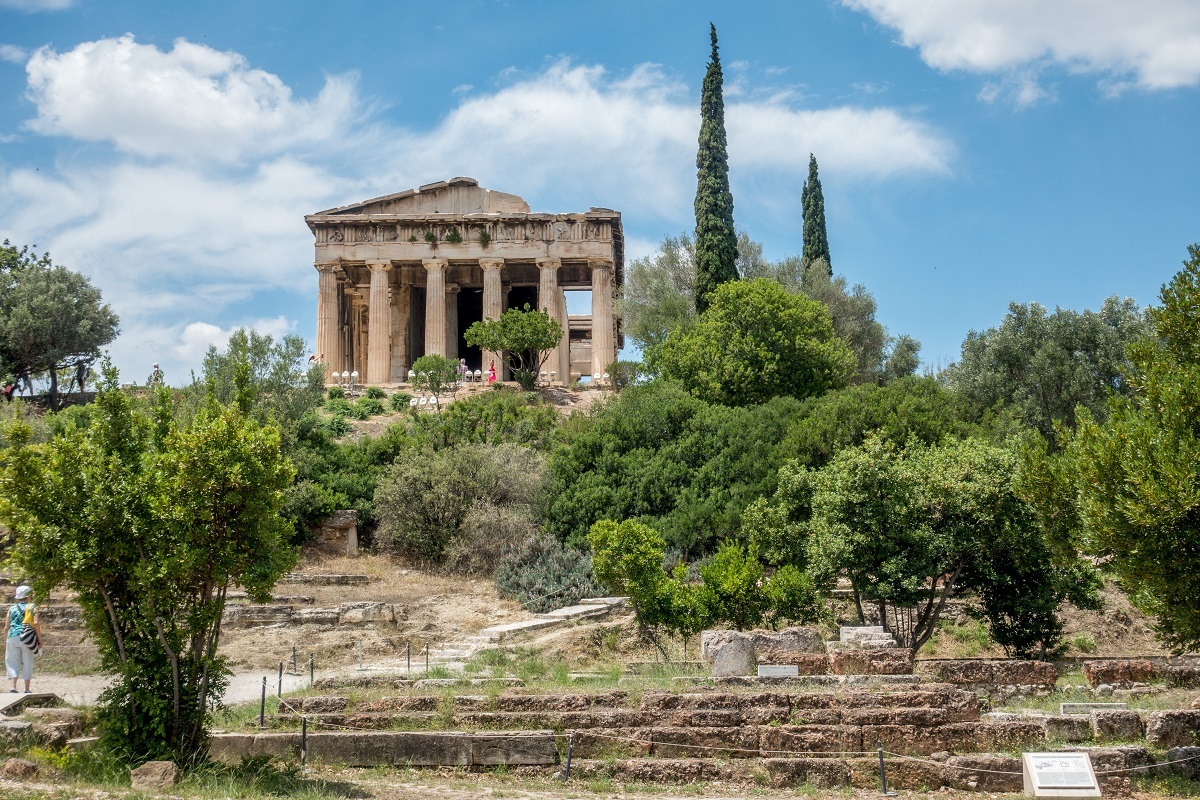 Visit the Ancient Agora of Athens

It was already mid-afternoon by the time we finished our food tour. While it wasn’t exactly the ideal time to head out for more sightseeing in Athens (it’s hot, y’all), we grabbed our sunscreen and water and headed for the Ancient Agora. 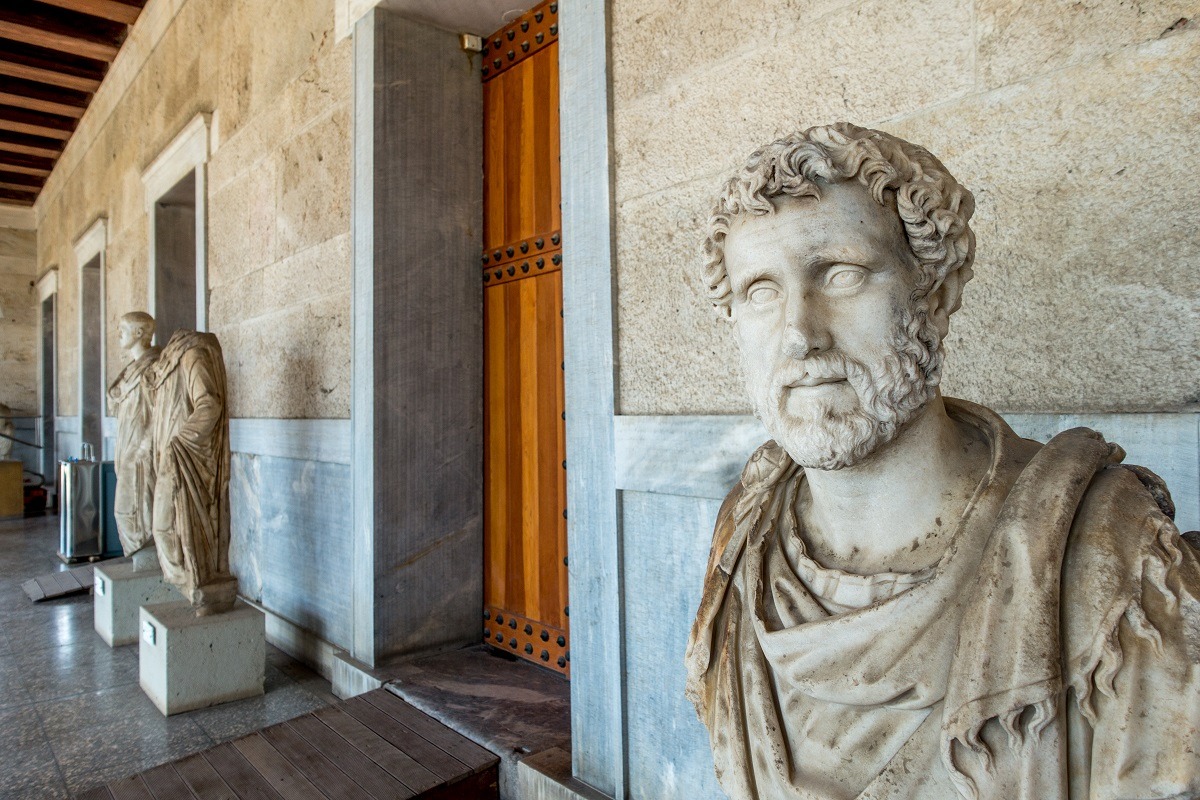 Over 2000 years ago, this stretch of land between Monastiraki and the Acropolis was the heart of Ancient Athens. Almost all the commercial, political, and social activity happened here. Socrates talked philosophy, the Apostle Paul came seeking converts, and people worshiped, shopped, and went about their business. Sometimes it’s pretty amazing to think about all the history in a place that we can still visit today.

Now the Ancient Agora is full of monuments and an excellent museum housing artifacts from the site. The Ancient Agora is also home to the Temple of Hephaestus, a Doric temple that was used from the time it was built in 415 BC until 1834—absolutely mind-blowing! Because it was used for so long, it’s in much better shape than similar buildings.

Overall, the Ancient Agora is a great place to spend a couple of hours walking the paths the Ancient Greeks walked and seeing all the statues, artworks, and regular items of daily living in the empire. 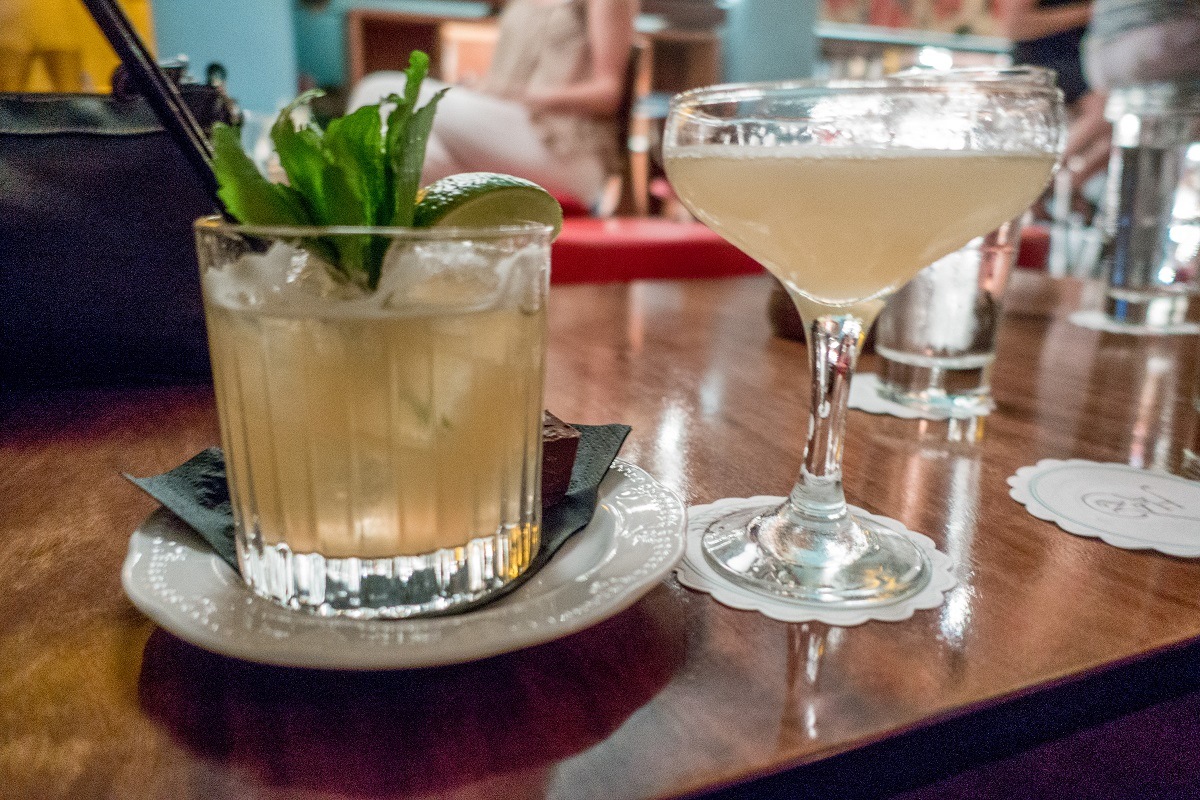 Relax at a tiki bar

After the food tour, you probably won’t need much more than a snack for dinner, leaving you free to do what we did and head to one of the 50 best bars in the world right in downtown Athens. Baba Au Rum is an awesome tiki bar featuring carefully crafted cocktails made from spirits from all over the world. They use organic, locally grown herbs and fresh-squeezed juices, and they even chip the ice by hand.

Given the bar’s name, it’s no surprise that many of the rinks are rum-based, but pretty much everything is available. We loved the drinks, the atmosphere, and the fact that there seemed to be a lot more locals than tourists at Baba Au Rum. 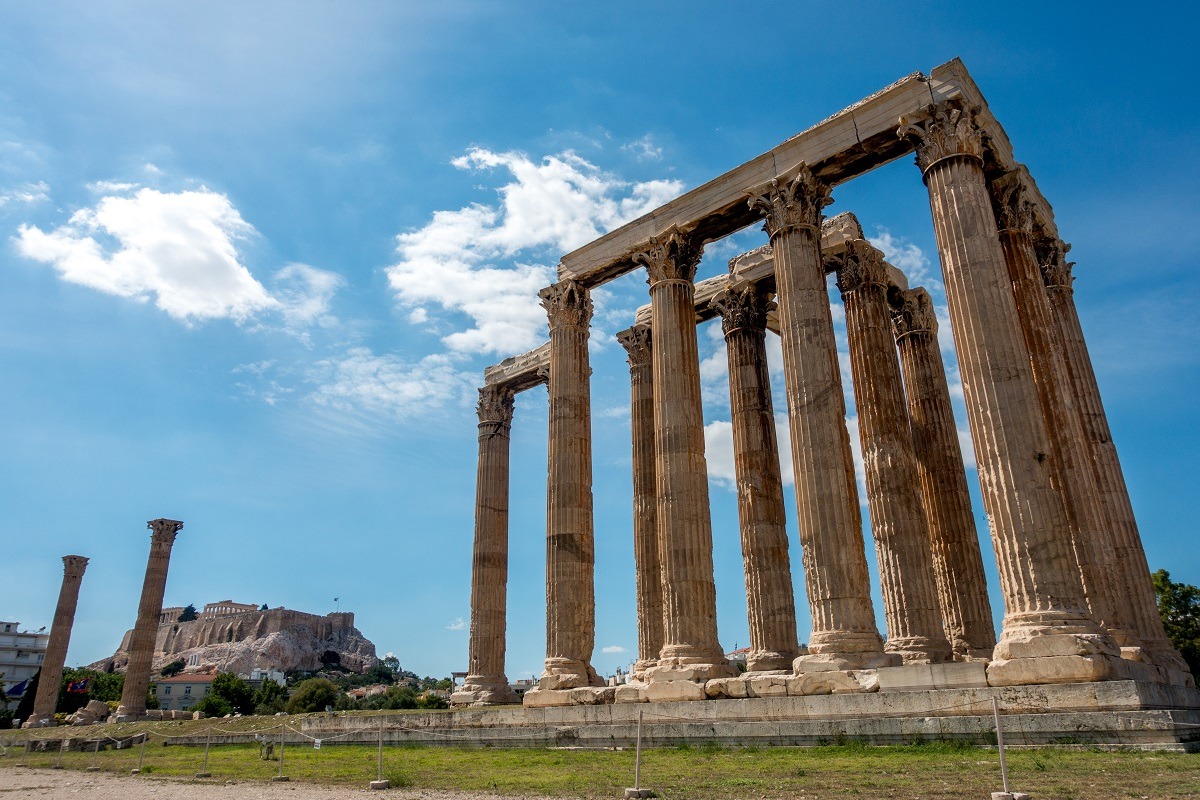 Marvel at the Temple of Olympian Zeus

Because there is just something about ancient temples, we had to fit in one more on our last full day in Athens.

The Temple of Olympian Zeus, which once housed the statue of the main deity, was considered one of the Seven Wonders of the Ancient World. At the time construction began, its builders envisioned it would be the greatest temple in the world. Right in the middle of Athens, the Temple of Zeus is impressive for its Corinthian columns that soar three stories in the air—15 of the original 102 remain. 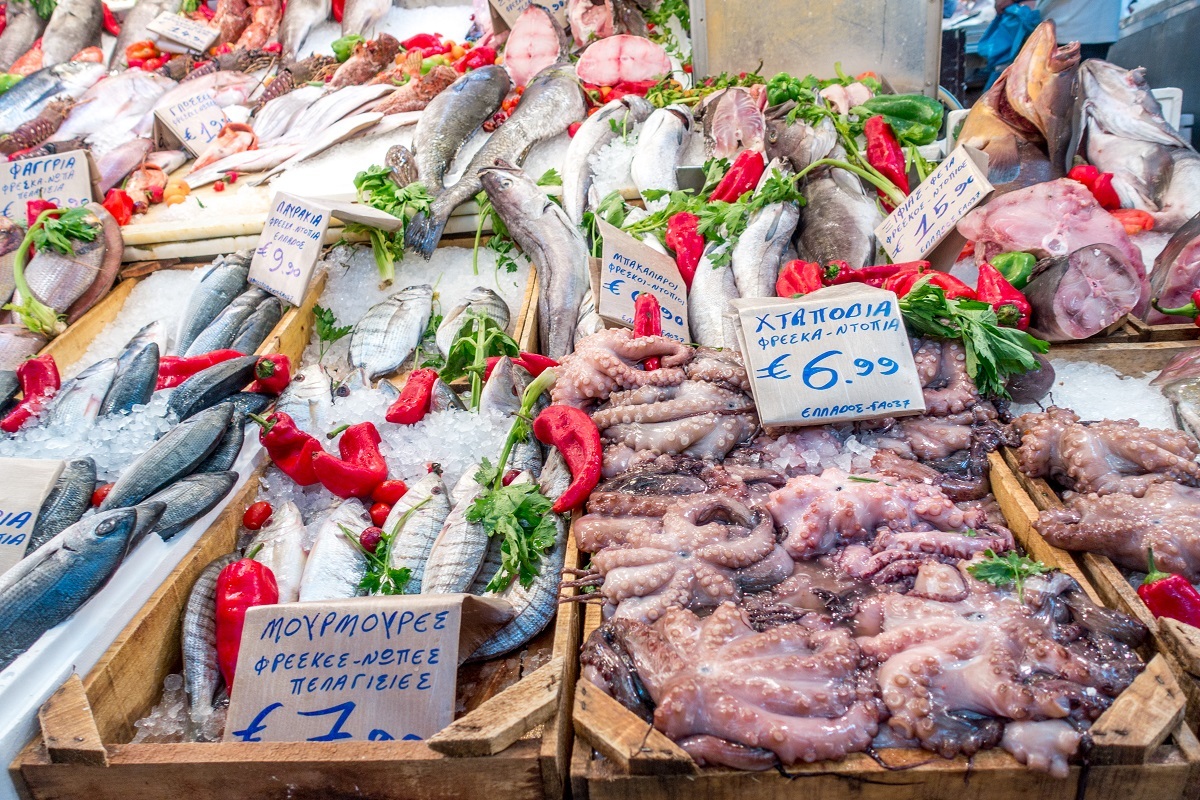 See the color at the Central Market

Because local markets are always at the top of our list on trips, the Athens Central Market was one of our favorite attractions in Athens. Brimming with all kinds of produce, seafood, and meat, it made me wish that we had a kitchen to cook in during our stay in the city. Truly, anything fresh and in-season you could ever want is available at this giant covered market, and it’s way more affordable than a grocery store.

In addition to the fruits, vegetables, and meats stands, the market is also home to several restaurants. You know the places are excellent when they’re full of locals who seem like they’ve probably been coming for years. Stop in to try some traditional dishes for lunch. 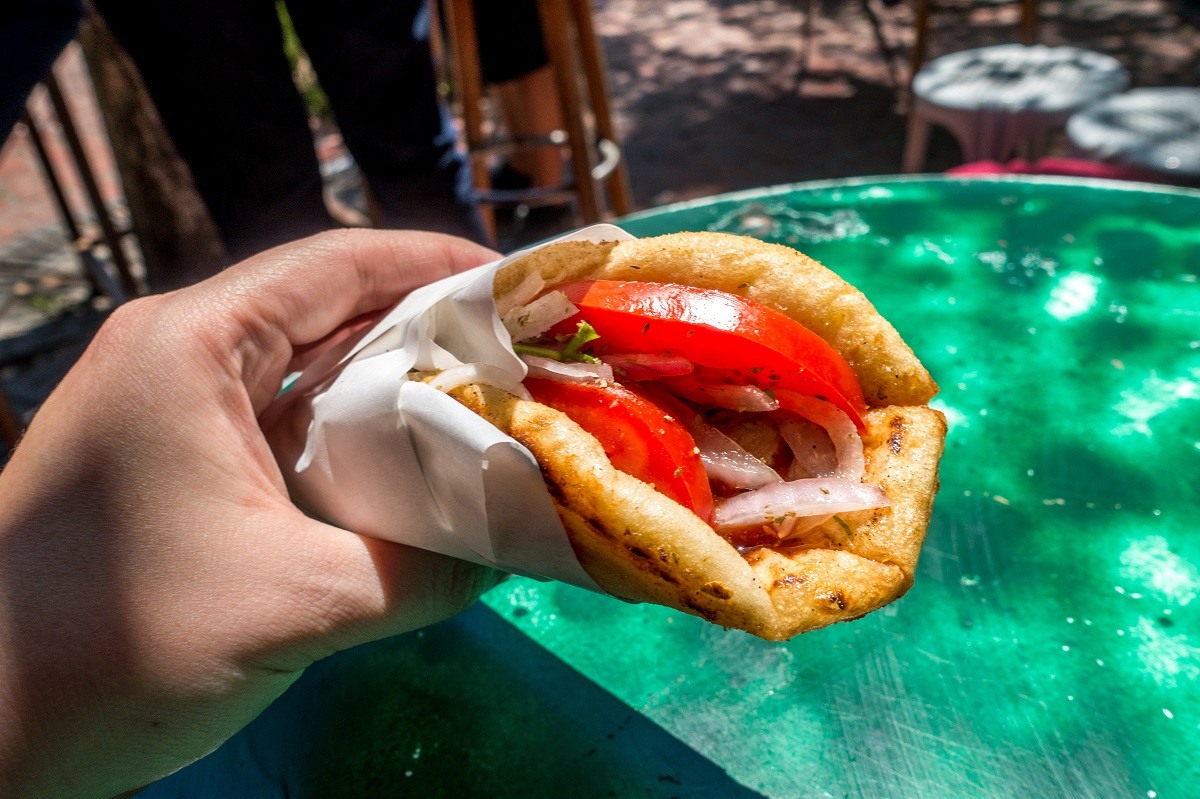 If you weren’t quite ready for lunch at the market or just want something a little quicker, head to Kostas on Syntagma Square for souvlaki. For about $2, you can get a pita wrap filled with meat skewers, vegetables, and tzatziki. The ingredients are fresh and high-quality despite the low price point. This place has been serving Athenians for over 65 years. It’s popular and often sells out by 3pm. 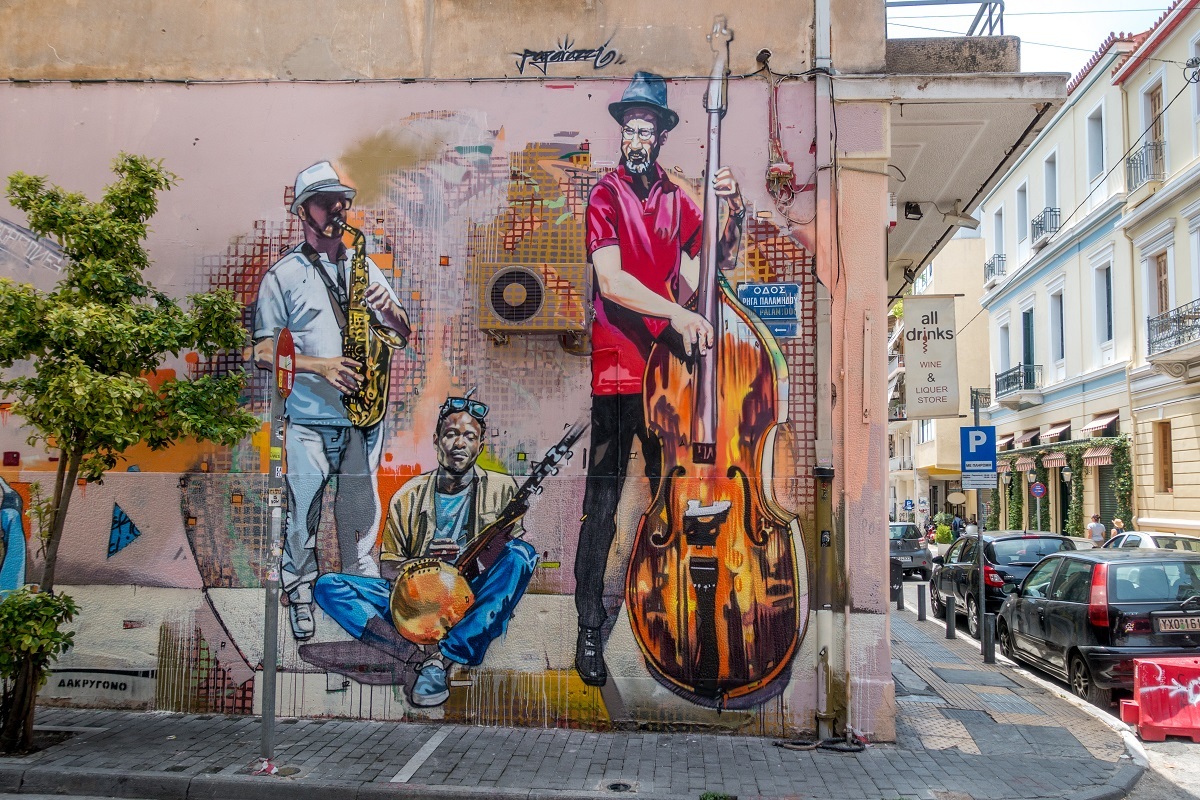 Just a few minutes from Kostas is the Psyrri neighborhood. With numerous cafes, bars, theaters, and galleries, the neighborhood is full of life. One of our favorite things to do here was just to walk around and gaze at the street art. The murals here aren’t garden variety graffiti—they’re sophisticated works of art and social commentaries with something new on every street. For a more in-depth look at the cool street art of Athens, consider this murals tour. 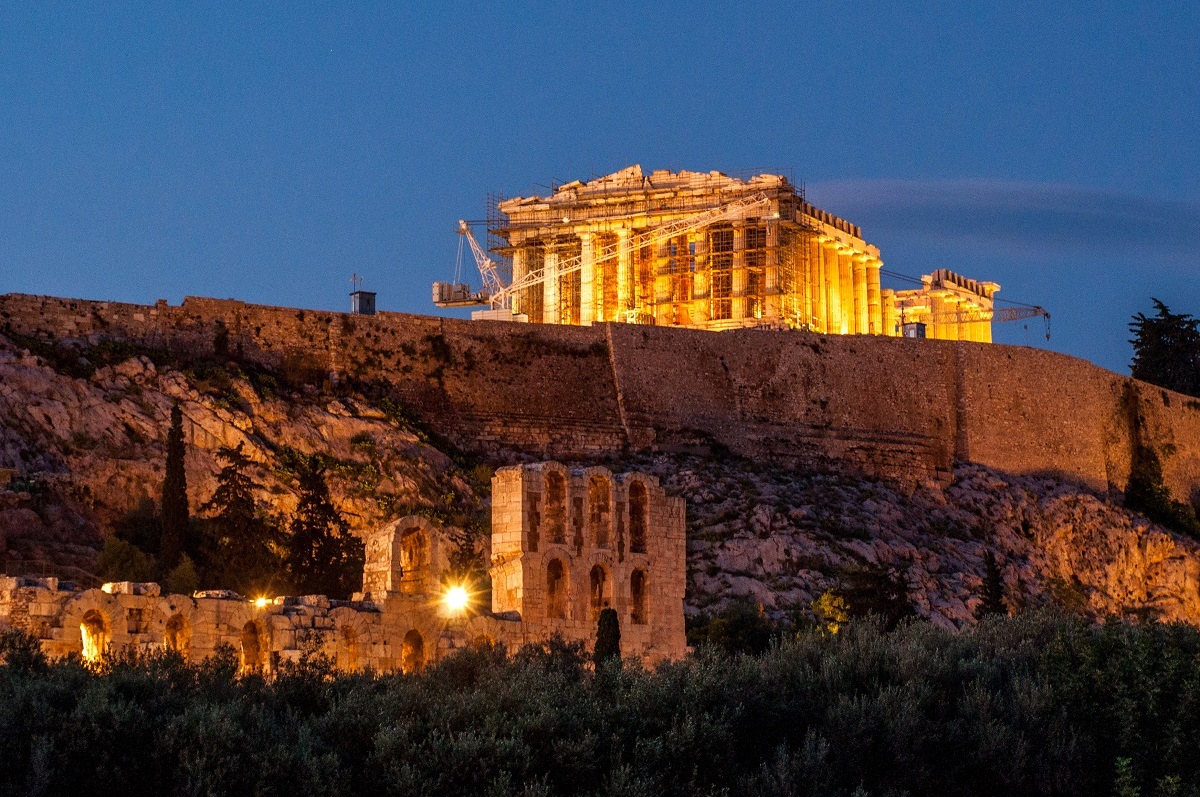 Dine with a view

Let’s be honest—usually restaurants on a square or with a great view of an attraction are over-priced and not so good. That couldn’t be further from the truth at Dionysos Zonar. Right at the foot of the Acropolis, the restaurant has a panoramic view of the Acropolis, the Parthenon, and the Theater of Herod Atticus. Watching the sunset over the ancient site while dining on delicious elevated Greek specialties like sea bass, lamb, and moussaka is an experience we will always remember. 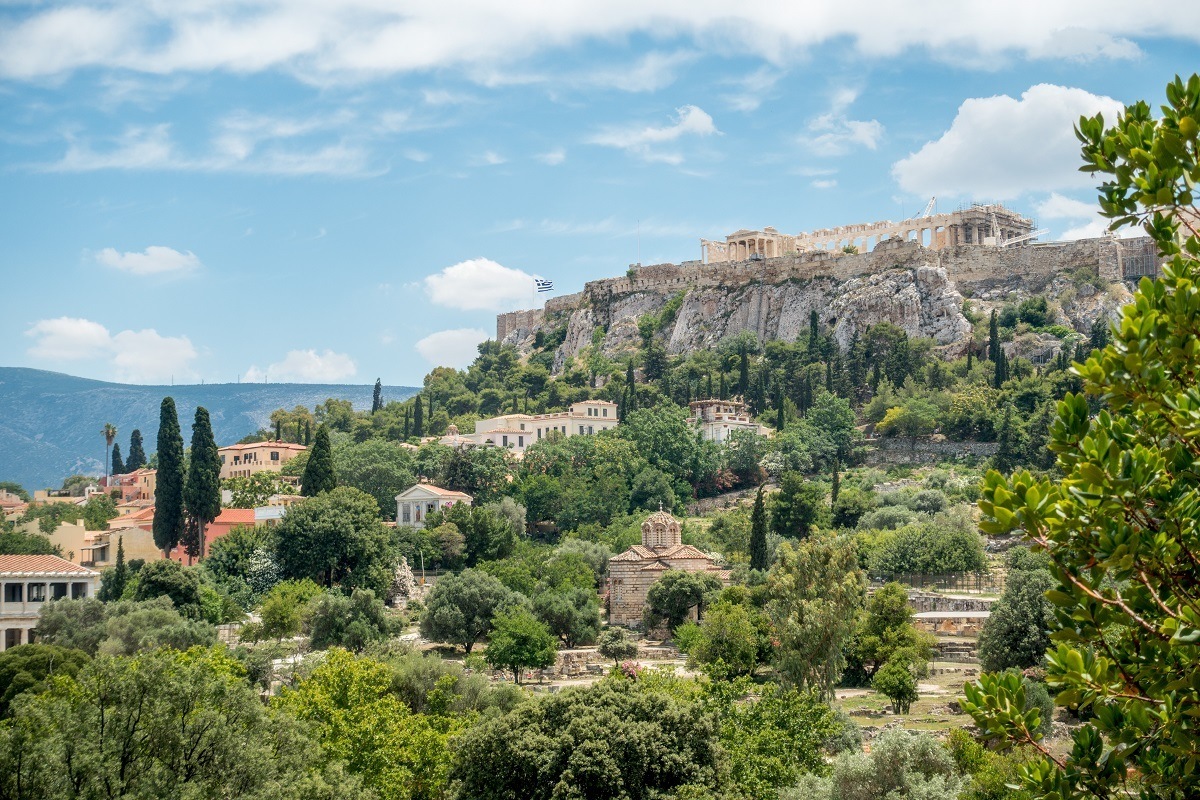 Where to Stay in Athens

COCO-MAT Hotel Athens — In the desirable Kolonaki neighborhood, the COCO-MAT is a designer hotel with comfortable rooms, excellent food and a rooftop garden. You can even rent a bike to explore the city. Read reviews and check prices.

Met34 Hotel–The Met34 Hotel offers spacious rooms and suites in the fun Plaka neighborhood. They even have an iPad for guests to use. Read reviews and check prices.