What It’s Really Like to Take a Holiday Cruise

For many people, traveling at the holidays is an inevitability. Some get in the car and head to grandma’s a few hours away, but for others, it’s nearly impossible to see family without forking out the money for a flight at inflated holiday prices. Our family falls in the latter category. Instead of heading to someone’s house, though, we take those precious days off work at the holidays to travel together. And recently, that has meant holiday cruises to Central America, the Caribbean, and the Mexican Riviera. Initially, we didn’t know what to expect from these family adventures, but now that we’re pros, we can share some of what we’ve learned about taking a holiday cruise.

Cruises are a pretty cost-effective way to travel. Depending on the cruise line, there are usually lots of options for 7-night cruises in the $500 range (plus taxes, alcohol, shore excursions, etc.). Along with most other travel costs, the prices of cruises often increase during the holidays, sometimes by as much as 100%. Still, it’s hard to beat a week-long tropical vacation with accommodations and all food included for less than $150 day.

When you add in major conveniences like the ability to visit lots of places without having to move hotel rooms and the fact that no one has to cook or do dishes, a holiday cruise can make a lot of sense for a family. This can be especially true for families cruising with small children.

It can be crowded

There’s no way to sugar coat this one – it can be very crowded at the holidays. Ships are often at full capacity, and many ports have at least two ships at once, sometimes more.

We tend to select smaller ships (less than 1500-2000) passengers, so we’ve never felt crowded on the ship, but on-shore can be another story. If you’re planning to take a tour or go on an excursion once you dock, be prepared that port cities and islands can be over-run with cruise passengers. Normally serene beaches and rivers can become packed with people not equipped for the crowds.

Almost all of our experiences have been great because we usually venture out on our own rather than joining an excursion from the ship. From lounging on the beach in Mexico to diving at an awesome sculpture garden in Grenada, we’ve had some wonderful, memorable times.

You can still get your religion on

Leaving home for the holidays doesn’t always mean that you want to leave the religious aspects behind, too. Every ship we’ve been on offers regular Sunday church services (both Catholic and Protestant) as well as services on Christmas Eve. The years when Hanukkah falls in late December, the ship also holds Jewish services.

The amount of “Christmas” varies

Each cruise line has its own approach to Christmas. In our experience, Holland America and Norwegian decorated most of the public spaces with wreaths, Christmas trees, gingerbread houses, and other items that evoke winter or Christmas. Celebrity’s decorations were more sparse and understated.

Each ship typically hosts a Christmas-themed show on Christmas Eve and an appearance by Santa on Christmas morning. Other options include activities like Christmas trivia, holiday movies, and Christmas music throughout the ship. If Hanukkah is being celebrated, too, you’ll find plenty of menorahs, dreidels, and blue and silver decorations, though they’re often not to the extent of the Christmas décor.

You can bring your own festivity

Regardless of how the ship treats Christmas or Hanukkah, you can always bring the party with you. On Holland America, it’s not uncommon to see passengers wrapping their cabin doors in gift wrap and hanging up stockings. Some passengers wear their ugly Christmas sweaters like badges of honor.

And we…well, we bring our own kind of Christmas with us.

Have you taken a holiday cruise? What was your experience like? 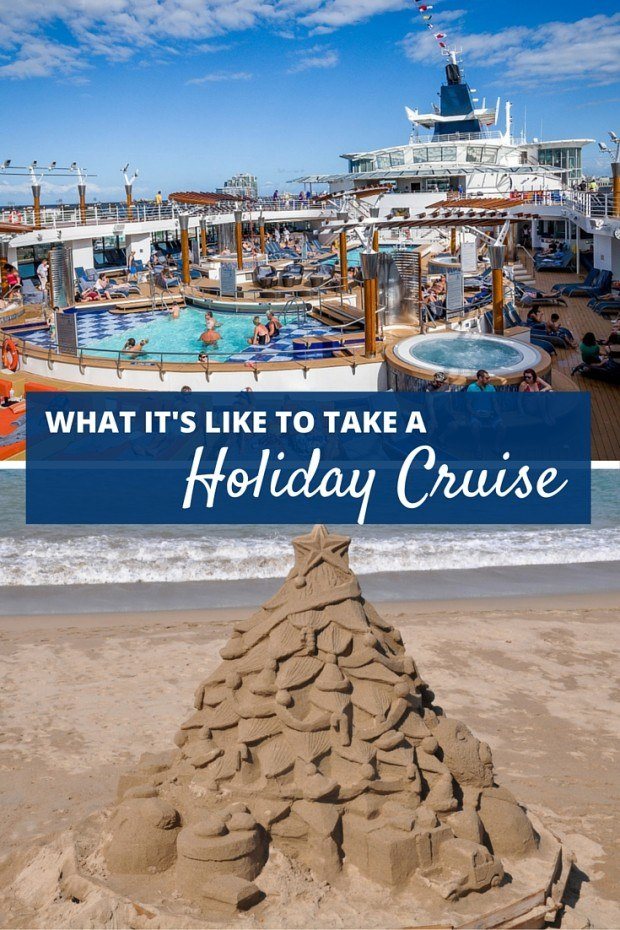