There are certain places that come to mind when you think of the Roman Empire. Rome, for one. Maybe the grand arena in Arles in the South of France or the remarkable aqueduct of Segovia, Spain. But not Morocco. At least, not for us—not until we learned about the ancient site in western Morocco called Volubilis.

A once-great settlement on the outskirts of the vast Roman Empire, Volubilis seems to rise out of the countryside in a place that feels like the middle of nowhere. Of all the places we looked forward to visiting on our two-week trip to Morocco, Volubilis was near the top of the list. I confess my nerdiness when it comes to all things ancient Roman.

Near the imperial city of Meknes, Morocco, the Roman ruins of Volubilis are a shadow of the prosperous city that once was. Though the city was close to the far southwestern bounds of the Roman Empire—away from the center of power—it was one of the wealthiest cities of its size.

The settlement at Volubilis began around the 3rd century BC, but the area began to thrive under Roman control in the 1st century AD. Its wealth was fueled by the fertile plain it sits on and the olive trees that grew there. Even 2000 years ago, olive oil was highly prized. The profits it generated led to the city’s growth.

The ancient Roman city of Volubilis was filled with great houses and villas adorned with intricate mosaics in the style of the time. There was a forum, a triumphal arch, temples, and public baths.

As the final stop on the Roman imperial roads that crossed France, Spain, and northern Morocco, Volubilis welcomed people from across the Empire. Its residents included Africans, Spaniards, and Jews, among others. In its golden age, Volubilis had 20,000 inhabitants—a large population for a one of the Roman cities in the provinces.

Volubilis fell to local tribes around 280 AD, and the Roman Empire did not try to retake it because of its remoteness and the difficulty in defending the city. It was inhabited for at least another 700 years, first by Christians and then as an important early Islamic settlement. In the 11th century, the seat of power of the Idrisid dynasty moved from Volubilis to Fes. In the following centuries, the city was deserted as the population moved to nearby Moulay Idris and elsewhere.

The Volubilis ruins remained largely intact until an earthquake toppled them in the mid-1700s. Stones, marble, and other building materials were then scavenged for buildings in Meknes. What remains at the site today has been reconstructed and is recognized as a UNESCO World Heritage Site.

A few steps from the parking lot, we walked down the gravel path to the remains of the ancient city. Looking out across the plain, the first thing we noticed was that the ruins of Volubilis are truly just that—ruins. Pieces of columns and fragments of walls and arches are scattered across the landscape, but the site is a whisper of the city that was once here.

Only about half of the Volubilis ruins have been excavated. And because so much was taken away for use in Meknes, many pieces of the city are no longer here to incorporate into the reconstruction. A visit to Volubilis requires imagination, but enough is still standing to appreciate how this ancient city would have looked.

The main street, Decumanus Maximus, runs through the northeast quarter of the city with the triumphal arch as an exclamation point. Nearby, arches of the ancient aqueduct that once fed the houses and baths still stand. Beyond that, there are columns and platforms of the forum, temples, and the basilica.

Our first stop was the House of Orpheus. The large upper class house takes its name from the mosaic of Orpheus playing the lyre to charm the wild animals surrounding him. The walls and structures of the home’s many rooms are in pieces, but the mosaics in situ blew us away.

The detail and the artistry of the mosaics—both in the House of Orpheus and throughout Volubilis—are incredible. But when you consider that they have survived the elements and numerous types of destruction for 2000 years, their completeness, colors, and beauty are amazing.

From there, we visited the city’s lavish baths and the reconstructed olive oil press. We walked through the forum, which would have been the heart of Volubilis. Where statues of emperors stood, there are now just pedestals.

By the forum are two of the main public buildings of the city—the basilica and the Capitoline Temple, which was built in 218 AD to honor Jupiter, Juno, and Minerva.

The basilica was the location of the magistrates who governed the city, not a church as the name seems to indicate. Only some of the arches and columns that supported the two-story building are still there, but the ruins indicate how large the structure was.

At the Capitoline Temple, we saw the ancient altar that now stands in the courtyard in front of the steps that lead to the Corinthian-columned temple. Dedicated to the three chief Roman gods and goddesses, the temple was a main gathering place in Volubilis. The citizens assembled here to ask the favor of the gods and to thank them for prosperity and success.

After seeing the public buildings, it was time to visit the main street of ancient Volubilis, starting with its crowning attraction, the triumphal arch. The arch was built in 217 AD by the governor of Volubilis, Marcus Aurelius Sebastenus, to honor Emperor Caracalla who had recently extended Roman citizenship to everyone who lived in the Empire. Although the Arch of Caracalla is plain now, it was originally topped by a bronze chariot and six horses and its base featured statues of nymphs pouring water into marble basins.

We walked the Decumanus Maximus—once the city’s most luxurious street—to see more of the remarkable mosaics in the ruined villas. There were portraits of Roman gods, images reflecting stories in ancient works, and geometric patterns.

Our favorite stop was the House of the Labors of Hercules, one of the biggest villas in Volubilis with 40 rooms. One of its large mosaics depicts a tale from Roman mythology—the 12 tasks Hercules had to do as penance for killing his wife and children. Nearby, the House of Dionysus and the Four Seasons features a colorful mosaic with all the seasons.

There are many more brilliant works to see throughout the site. At Volubilis, the buildings may be sparse, but you’re spoiled for choice when it comes to mosaics.

Tips for Visiting the Site 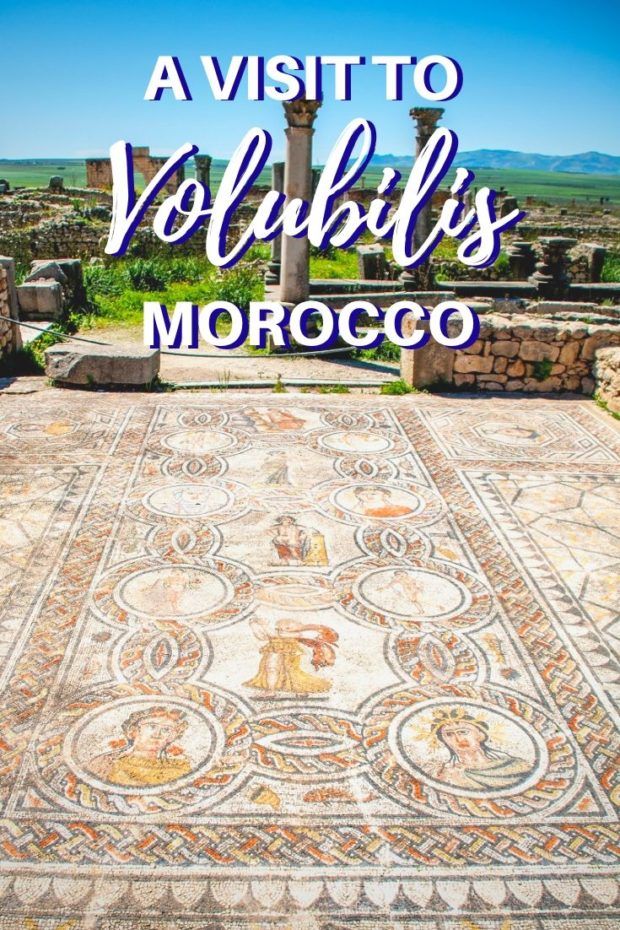 We had a wonderful guide. He was so informative and spoke very good English. He was one of the guys standing at the entrance.