A day trip to Segovia, Spain, is a perfect way to see the sites that make this small city so famous. From the imposing aqueduct to the enchanting Alcazar, visitors can make the most of their time here because the main attractions are within walking distance of each other. It’s easy to see the highlights in just a few hours, making Segovia an ideal option for a day trip from Madrid.

From the moment you arrive in the old town, you’re greeted with the grandeur and history of a city that has stood for over 2000 years. On a Segovia day trip, we visited the UNESCO World Heritage Sites that make the city so famous. Plus, we tried its most well-known dish and added a few other highlights to our walk.

How to Take a Madrid to Segovia Day Trip

There are several different ways to travel the approximately 60 miles (98km) from Madrid to Segovia.

The simplest option for getting to Segovia is to take a day tour because you’ll get to exactly where you want to go and back with minimal chance of getting lost or encountering transportation issues. This round-trip tour from Madrid will show you the sites and offers free time to explore. For an even deeper experience outside Madrid, this tour to Segovia also includes a visit to beautiful Toledo.

Read about what you can see on a day trip to Toledo.

The trip on the Madrid to Segovia train is less than a half-hour because it’s a high-speed train. It couldn’t be easier. The only drawback is that the train to Segovia doesn’t leave from Madrid’s central Atocha Station—instead, you need to go to the Chamartin Station in the northern part of Madrid. Prices vary depending on which train you choose, but it’s easy to find a round trip ticket for about €20 per person, which makes this the best value for getting from Madrid to Segovia.

When you arrive, you’ll need to take the local bus #11 into the city center. Because many of the people on the train will also be doing a day trip from Madrid to Segovia, the bus can be quite crowded. As an alternative, a taxi can get you there quickly. We took the bus into the city in the morning and a taxi back in the evening before our return train.

If time isn’t a consideration or you’re on a strict budget, the bus may be a good option. A round trip from Madrid is about €10—roughly half the cost of the train—but the journey is about three times as long at an hour and a half. Buses from Madrid to Segovia also depart 16 times a day. Still, if you’re using public transportation, we’d recommend the train.

Things to do in Segovia

Our primary goal on our Segovia day trip was to visit the city’s UNESCO World Heritage sites—the Roman aqueduct, the cathedral, and the Alcazar of Segovia. The sites are close together and can easily be visited in a few hours. That left us just enough time to try the suckling pig that the city is so famous for and to fit in some of the city’s less prominent sites during our walk.

The most recognizable—and certainly the most imposing—structure in Segovia greeted us when we stepped off the bus at the southern entrance to the old city. At nearly 3000 feet long and 94 feet tall at its highest point, the aqueduct is impossible to miss.

We’ve seen other aqueducts before, including the most well-known Pont du Gard in southern France, but there’s something about these grand structures that’s absolutely mesmerizing. Whether it’s the size, the age, the symmetry—it’s hard to say why they hold our gaze for so long, but the Segovia aqueduct really is impressive.

The massive aqueduct dates from the 1st century AD and originally spanned over 10 miles (17km) carrying water from the mountains to the city of Segovia. Its gradual slope that moved the water along and its towering arches are a miracle of engineering, as nothing but gravity and force hold the stones together.

The aqueduct is remarkable from the ground where we got an appreciation for its height, but climbing the staircase beside the visitor’s center gave us the chance to see it at nearly a bird’s-eye view. From that vantage point, we got a sense for just how far it stretched to the mountains in the distance. It’s hard to believe that the structure is still in such great condition (a restoration project helped) and was used until the 20th century. Don’t miss making the climb up the stairs.

Cochinillo became popular in the Castile region in the 17th century, so it’s an important part of the city’s heritage and one of the top things to try when you tour Segovia. There are a handful of restaurants that do it really well like Meson Don Jimeno near the Alcazar and Restaurante Jose Maria one block off Plaza Mayor.

We opted for Meson de Candido. In the shadow of the Segovia aqueduct, Candido has been a family-run restaurant since 1786. They serve the cochinillo straight from the oven with a brief stop for a ceremony that involves cutting the cochinillo with a plate that’s then smashed on the floor. Nothing like a little flourish with your meal.

Just a five-minute walk from the aqueduct found us in Plaza San Martin. The area initially caught our attention because of the heroic statue in the middle wielding a giant flag. The monument turned out to be in honor of Juan Bravo, a 15th century revolutionary who fought for Segovia.

Stopping for a minute to inspect the figure made us look around a little more to see the historic Romanesque San Martin Church. The church was originally built in the 12th century and has been added to and altered in different styles over time. With arches, porticoes, and a remarkable bell tower, it’s worth a peek inside the church, if it’s open for visitors.

If you didn’t stop for cochinillo asado earlier, there are several restaurants in the plaza—some of which have outdoor seating.

The main city square is Plaza Mayor. Bounded by the stunning Segovia Cathedral on one side and the San Miguel Church on the other, Plaza Mayor is otherwise filled with lots of cafes and restaurants and the main visitor’s center.

If you’re lucky enough to visit on a Thursday morning or early afternoon, you’ll find the weekly market set up in Plaza Mayor full of produce, flowers, and other goods. On special occasions, there may even be music in the bandstand in the center of the square. Pull up a chair, grab a drink or an ice cream, and watch the activity of this lovely city.

Gawk at the Segovia Cathedral

We couldn’t help but stare at the Segovia Cathedral. Taking up the whole western side of Plaza Mayor—and much more—the hulking yellow building is meant to attract attention. As with just about every public building constructed during the Renaissance, it was built to impress.

Today, the Segovia Cathedral is visible from almost everywhere in the city. Its soaring tower, dome, and spire rise up above everything else, punctuating the skyline and making for great views from nearby parks. If the views it creates now are still considered awe-inspiring, it’s impossible to imagine what message it must have sent to the citizens of the 1600s.

Construction on the Cathedral of Segovia began in 1525 in the Gothic style. With flying buttresses and ornate ceilings, its interior is decorated with an imposing carved choir and 16th-century stained glass windows. The cathedral’s 21 chapels have individual altars and artworks that draw pilgrims from around the world.

The Segovia Cathedral is one of the three main UNESCO World Heritage Sites in the city and is one of the top Segovia attractions. Don’t miss its sun-drenched cloister on a pretty day or the unique Chapter House draped in sumptuous tapestries.

Just a few steps from the cathedral is a much less grand 16th-century church with a deep history. San Miguel Church has a whitewashed interior with a stunning Baroque altarpiece that dates from the late 1600s.

The simplicity of the current building belies its symbolism. The original San Miguel Church was demolished in 1532, and this one was constructed as a replacement. The previous church was the site where Isabella I (wife of Ferdinand II, benefactor of Christopher Columbus, expeller of Jews, and unifier of Spain) was proclaimed Queen of Castile in 1474. The church is free to visit, so stop in if you have a moment on your Segovia walking tour.

Marvel at the Alcazar of Segovia

From the outside, there’s no denying that the Alcazar is impressive. With its giant turrets and deep moat, everything about it makes clear what an imposing castle-fortress it once was for the kings who roamed its halls.

Still, there was something about it that seemed a little too perfect. Its walls were a little too polished and chiseled, its turrets just a little too perfectly blue. It turns out that a fire swept through the Alcazar in 1862, leading to the replacement of the roofs and a reconstruction and refurbishment. Still, the echoes of the distant past are evident in the Alcazar’s current incarnation as a museum, and it was the most extraordinary site we saw in Segovia.

The Alcazar of Segovia began its history as a Roman fort. Over the centuries it was rebuilt, expanded, and redecorated in the fashion of the time. Sometime in the 1100 and 1200s, it began to look more like it does now when it became the royal residence, but changes continued over the years.

As it is now, the Alcazar looks like it’s straight out of a fairy tale (rumor has it that it inspired the castle in Snow White and the Seven Dwarfs). Highlights include the Throne Room with the motto of the Catholic monarchs and the Room of Kings where 52 reliefs of rulers of Castile and Leon in the Middle Ages peer down from the ceiling.

Throughout the Alcazar, you’ll see Mudejar (Iberian decorative style of the 12th to 16th centuries) ceilings and Moorish tiles alongside more elaborate decorations. It all captures the history and changing influences in Spain over the centuries. Don’t miss the chance to enter the tower (a separate ticket) for views of the city and surrounding countryside.

Leave extra time. If you take the high-speed train from Madrid, you may need to buy your ticket from the ticket counter rather than one of the machines, so leave yourself a bit of extra time for that and for the baggage screening before boarding the AVE train. We weren’t prepared for either of these minor stumbling blocks and cut it a bit close.

Leave the car. It’s easy to get around on foot. Whether you drive or take public transportation, plan to spend the day walking. 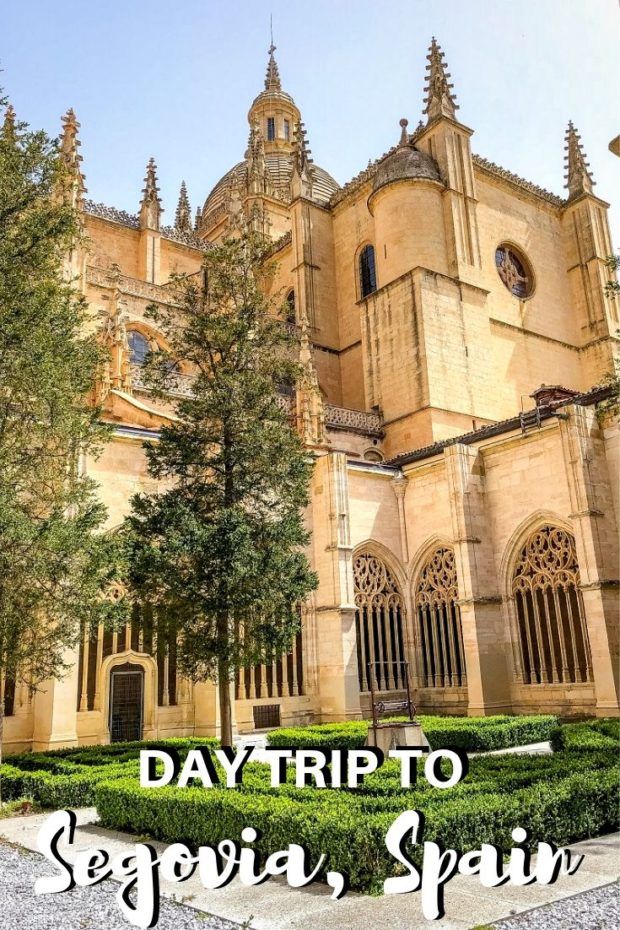