Bremen, Germany, is at once a modern university town and a port city with more than 1200 years of history. Its Old Town reflects its medieval and Renaissance past, but many of the old merchant houses are now restaurants, and neighborhoods where tradesmen lived have the same charming exteriors but are boutiques and art galleries inside. When the weather is nice, residents spill down the banks of the river at outdoor cafes and markets.

Bremen is close enough to Hamburg that it’s easy to visit but far enough away to make it just off the main tourist route for many international visitors, which is one of the many things that makes it a great place to spend a couple of days. Here some of our favorite things to do in Bremen on a short visit.

Built in 1405, Bremen’s beautiful Gothic Town Hall (Rathaus) has witnessed six centuries of history in the Hanseatic City and is one of the top places to see in Bremen. On the outside, its detailed, red-brick façade made us feel like we’d stepped into a fairy tale. On the inside, we saw the vestiges of a powerful merchant city that hosted mayors, emperors, and other influential dignitaries beginning in the Middle Ages.

Somehow, this brilliant building—now a UNESCO World Heritage Site—survived the fighting that destroyed much of the city during World War II. That means that its structure as well as many of its works of art and decorations have been preserved for visitors today. From Wilhelm II’s marble cabinet to the ornate Golden Chamber, there is still very much to see inside Bremen’s Town Hall.

Wish upon the Bremen Town Musicians

One of the top attractions is the Bremen Town Musicians statue just outside of the Town Hall. This quirky statue, based on the Brothers Grimm fairy tale of the same name, is essentially the symbol of the city.

The bronze statue features a donkey, dog, cat, and rooster—the band of musicians who set out together to make a living in Bremen. Touching the donkey’s front hooves is said to make wishes come true. You’ll find other statues and representations of the famous animals all over town (and even as far away as Bremen’s sister city, Riga, Latvia).

See the Statue of Roland and Marketplatz

Bremen’s Marktplatz (Market Square) is the heart of the city’s Old Town. With its historic merchant houses now mostly transformed into shops and cafes, it is one of the most picturesque places we’ve ever seen to meet friends or have a cup of coffee. Or you may just lose yourself in staring at the beautiful buildings like we did.

During certain times of the year—namely late October, November, and December— Marktplatz is lit up with the lively Freimarkt, an ancient fair with a 1000-year history, and Bremen’s Christmas market.

On the side of the Marktplatz nearest the Town Hall is one of the most important city sights, the Bremen Roland statue, which shares the UNESCO designation with the Town Hall. The 33-foot-tall limestone statue built in 1404 depicts an important figure from the time of Charlemagne as a symbol of civic liberty and freedom from the dominance of the church.

Bremen is home to one of the most prestigious wine collections in Germany. Housed in the 600-year-old wine cellar at the Bremen Ratskeller are hundreds of bottles from across Germany’s 13 wine-producing regions. A tour here will show you many of the current bottles, the special vintages kept in the cellar’s “treasure chest,” and the massive wooden barrels that used to be the primary storage vessels.

We opted for a wine tasting of a wine specially selected by the cellar master. The tasting is worth it for the setting alone—you’ll be sipping alongside barrels filled with some of the best and oldest wines in Germany, including a priceless vintage that was last tried by Queen Elizabeth. A visit here is definitely one of the best things to do in Bremen.

Constructed in the 11th century, the medieval St. Peter’s Cathedral is an important city landmark. Partially destroyed during World War II air raids, the cathedral’s 320-foot-tall twin towers dominate Bremen’s skyline. You can visit one of them for great views of the city.

Major highlights of the cathedral include its striking choir, the organ, and the intriguing mummified bodies in the Lead Cellar.

Schnoor—a maze of narrow, winding streets a few minutes from Marktplatz—is Bremen’s charming medieval neighborhood. The oldest part of the city, Schnoor was once the fishermen’s quarter. Today, its 15th-to-18th century buildings are full of cafés, boutiques, and galleries. It’s the perfect place to have lunch or do a bit of souvenir shopping. Our favorite lunch spot was Teestübchen im Schnoor.

Once one of Bremen’s harbors, the Schlachte Embankment is now popular for its restaurants, beer gardens, and river boats. Stroll down to the promenade along the River Weser to enjoy some of the most fun places in Bremen, especially during the spring and summer. If you’re lucky, you might even catch one of the eclectic weekend markets here.

Thanks to its location near the North Sea, fish of all kinds is popular in Bremen. Since it’s Germany, beer (especially Becks) and sausage (especially a local variety called pinkelwurst) often make an appearance as do potatoes, kale, and cabbage.

There are also lots of international cuisine options, but trying the local food is a great way to get a sense for the place. We opted to try labskaus, a dish of pureed corned beef, potatoes, onions, and beets, topped with gherkin and fried eggs with herring on the side. Travel is nothing if not a culinary adventure!

Seeing windmills in a place like the Netherlands makes sense, but we didn’t expect to find them in Germany. Yet, walking from the train station to the city center, one of the first things to catch our eye was Am Wall windmill (Muhle am Wall). It’s one of the most interesting things to see in Bremen, especially if you haven’t seen one up-close before.

Located in the lovely Wallanlagen Park, the 19th-century windmill houses a restaurant and is open to tourists. The surrounding park is a great place to go for a walk or relax outside.

Just across the river from the old town, you can visit Beck’s Brewery. Brewing since 1873, Beck’s makes one of the most famous beers in Germany and around the world.

On Monday through Saturday, guests ages 16 and up can take a 3-hour tour of the brewery’s museum, the raw material room and the brewhouse to see the operation at work. Like all good tours, it ends with a tasting.

Breathe deeply at the flower market

It wouldn’t be a proper visit for us if we didn’t find a market. From tulip bulbs and mums to roses and orchids, just about every flower on your list can be found at the daily flower market. Outside the Church of Our Lady, this spot is a fun place to browse the colorful offerings and watch locals go about their daily business.

Originally occupied by coopers, Bremen’s narrow Böttcherstrasse was transformed into a street of art in the 1920s. The project, commissioned by Bremen native and inventor of decaf coffee Ludwig Roselius, led to the creation of museums as well as sculptures and works of art lining the street. You can’t miss the huge gold sculpture at the street’s entrance, which will lead you past unusual expressionist architecture and unique galleries.

The most impressive feature of the Böttcherstrasse is the Glockenspiel House. Stretched between the peaks of two rooftops, rows of 30 porcelain bells ring at regular intervals. To the left of the glockenspiel, panels depicting explorers, seafarers, and aviators rotate with the music, which plays for an impressive 8.5 minutes.

January through March, the bells play at noon, 3pm, and 6pm. The rest of the year, they play every hour from noon to 6pm.

We were guests of the German National Tourist Board. All opinions of the charming and historic are our own. 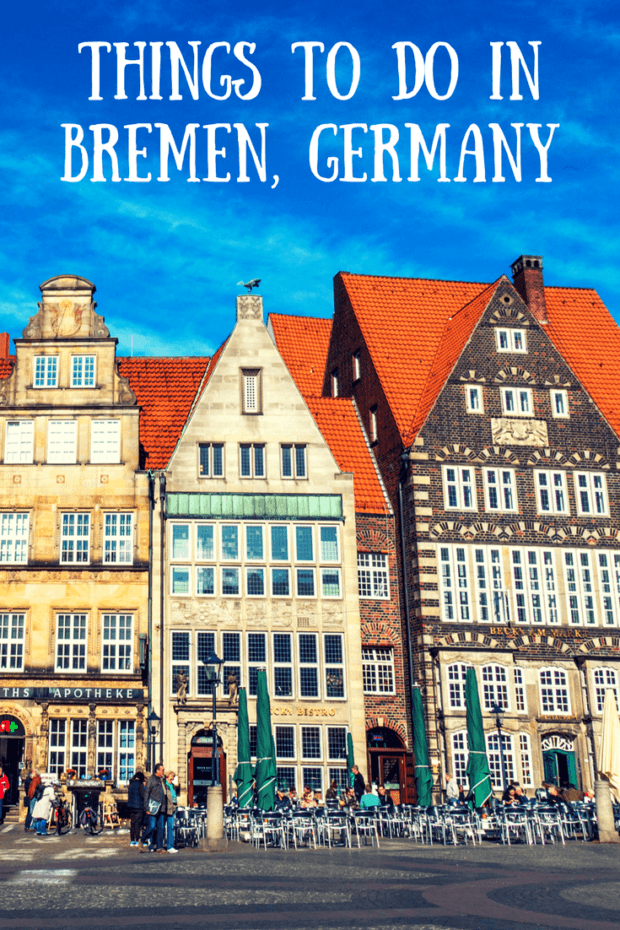 I love the architecture Laura. Beyond magical.

This is my hometown and I'm about to go back for a week after 20 years in Texas. You have done an excellent job describing the charming beauties of my great city. Thank you!

Love your post about Bremen, Germany. What time of year do you recommend going?

Between April and September is your best chance to have warm and sunny days.