One of our favorite cities in England, the Georgian gem of Bath is known for lots of fun things to do year-round, but it is a particular standout during the holidays. For two weeks each year, the squares and streets transform into the Bath Christmas market—a citywide festival of food, entertainment, gifts, and holiday decorations. When we decided to visit England in December, returning to Bath was a must.

The Christmas market in Bath often tops the list of best Christmas markets in England. Much of that has to do with two things—its stunning location and its size. With more than 150 chalets set among the historic buildings of the UNESCO World Heritage Site of Bath, visiting the market has a kind of romance Jane Austen would have approved of.

The center of Bath becomes one large market at Christmas time. There are the chalets that are officially part of the market, but businesses and restaurants have their own kiosks and displays that seem to spill onto the sidewalks, making the whole city center feel like it’s joined in on the fun.

Much of the market is concentrated around the unmissable Bath Abbey and Roman Baths. If you can’t find the center of the action, just scan the skyline for the imposing bell tower and walk that direction. You’ll find chalets along Abbeygate Street, Abbey Green, and Abbey Street and in Abbey Churchyard—are you sensing a theme here?

We arrived by train, so our first stop just 3 minutes from the station was SouthGate, a large shopping center and restaurant complex. In the streets surrounding SouthGate, food stands served long lines of visitors with Vietnamese options, Moroccan specialties, and roasted nuts and mulled wine. Buskers performed Christmas songs and lights guided the way to the chalets. It was the perfect warm up for the Bath Christmas fair.

Just a few minutes later, we entered the fray of the market. Nearly one-half million people visit the Bath Christmas market during the roughly 15-20 days it’s open each year, which means it can get a bit crowded, especially on weekends. On Abbeygate Street, we dove right in.

Shopping and eating at the market

As soon as we saw the first chalets, we were struck by the uniqueness of the merchandise. We’ve been to about a dozen Christmas markets in Europe from Belgium to Germany and beyond, and one thing we’ve noticed is that many have a formula.

While there are always local vendors and characteristic food and gifts, there is often a selection of items that are more commercial and mass produced—more targeted at tourists or people shopping for things in a hurry rather than wanting something special. That’s not the case in Bath.

It varies slightly by year, but nearly 90 percent of the vendors at the Bath Xmas market are local. That means that practically everything being offered is handmade, specially crafted, or artisan. What we saw in Bath had no relation to the decorations, gifts, and other items we saw for sale in London, Birmingham, or even nearby in Oxford. That alone makes Bath a must-visit.

As we made our way toward the Abbey, we marveled at all the unique things for sale. There were beautiful blown glass ornaments, handmade jewelry, and painted kitchenware. We saw cozy shawls and all manner of things designed to block out the English wind alongside craft spirits, sauce-making kits from a local chili farm, and artwork.

Among the gift and food stands, you’ll also find the charity chalets. Every day during the duration of the market, different charities have the chance to raise awareness of their organizations and collection donations. There are two chalets which allow 36 charities to introduce themselves to market visitors and give people the chance to do a little good during the holiday season.

As the chalets continued up Union Street and Milsom Street, the stallholders featured garden sculptures, clothes, and candy and chocolates that looked like they came from the mind of Willy Wonka. We saw traditional sausage rolls and mince pies, and we sampled bratwurst and local mulled gin.

There were pastries galore, and the scent of flapjacks filled the air as we approached the piano on New Bond Street that invited anyone who wanted to play to contribute to the holiday mood. It was truly joyful.

We wound our way a little further north and headed for Royal Victoria Park not far from the famous Royal Crescent. In winter, this place comes alive as Bath on Ice. From mid-November through the first week of January, crowds flock to the ice-skating rink to take a spin. It opens mid-morning and skating hours stretch well into the evening.

There are wood-fired pizzas and mulled cider to warm up with at the rink, or you can get a great view of the skaters from overhead at the Royal Pavilion Cafe. It was fun to watch families and friends out for the day and people who were clearly testing their blades for the first time.

Just behind the ice-skating rink is another unique experience–Victoria Falls Adventure Golf. You can check out their 18 holes of mini golf during the day, but at night in the winter, the entire course becomes glow-in-the dark. Over waterfalls and around the lake glowing in green, red, and other surreal colors, you can try your hand at scoring a hole-in-one.

The opening days of the Christmas market vary slightly each year, but it is generally open from the end of November through mid-December. The market will be open November 24-December 11, 2022.

More things to do

You could spend most of the day wandering through the market, ice-skating, and shopping. But, if that’s not enough, there are lots of other things to see and do in this beautiful city.

Throughout the weeks the market is on, there are lots of entertainers from local choirs to individual musicians to brass bands.

If you’re already at the market, it’s easy to stop into the Abbey for Shoppers’ Carols every Thursday, Friday, and Saturday. The casual 20-minute services feature traditional carols and offer a break from shopping right in the middle of the market activity.

Additionally, the entertainment stage on New Bond Street welcomes different performers, and there are concerts and events around the city including pantomimes and even the Bath Philharmonic playing the live musical score to accompany a holiday movie.

Over the holiday season, Bath is decked out in thousands of Christmas lights. Some are in the colors of the rainbow and others are bright white to complement the architecture of the city.

We loved the lights along Milsom Street and its cross streets, stretching over the Christmas market’s chalets and some of the main shopping areas. You’ll also find Christmas lights throughout the city center, including displays at SouthGate and on the Christmas trees at Bath Abbey, near the train station, and in other areas around town.

Marvel at the ancient Roman baths

The top attraction here is the ancient Roman Baths that date back to the first century. The area’s natural hot springs were channeled inside a Roman temple, and a settlement grew up around it, ultimately leading to modern-day Bath. There’s lots of history in the centuries in between, and that story is told in engaging detail inside the museum at the baths.

The Santa on skis marks the spot of one of the most festive places for adults in Bath. The Aprés-Ski Bar at the Abbey Hotel is just a few steps from the market and is an ideal place to warm up with a holiday-themed cocktail. You’ll be surrounded by ski lodge decor from antlers to plaid window shades. The bar is cozy and welcoming but also very popular, so be patient if you’re trying to get a seat.

Have tea at one of the oldest houses in Bath

There is lots of great food available at the Christmas market, but if you’re spending a weekend in town or taking a day trip here, you may want more than the market offers (or a place to sit down to eat it). Sally Lunn’s is the ideal spot to have tea or a snack on a chilly winter day.

Sally Lunn’s is famous for their buns. They’re hard to describe but are essentially light breads that are delicious vehicles for butter, cinnamon, clotted cream, jam, and more. If you’re a carb-lover, make a beeline here.

Beyond the food, Sally Lunn’s is one of the oldest houses in Bath dating from 1482. You can see excavations that date to Roman times in the house and the bakery where Sally made her buns in the last 17th century.

The Gainsborough Bath Spa – The Gainsborough is the only hotel with access to the city’s natural thermal waters, which are used in the spa. One of the Leading Hotels of the World, it offers five-star accommodations and service.

The Francis Hotel – This Regency-style townhouse hotel is close to some of the best bars and restaurants in Bath. Many of its rooms have four-poster beds and views over the city.

Abbey Hotel– Built within three Georgian townhouses, the Abbey Hotel offers 4-star accommodations. Guests can enjoy drinks in the ArtBar or on the terrace, which offers al fresco dining in the summer and transforms into the pop-up ski bar mentioned above in the winter. 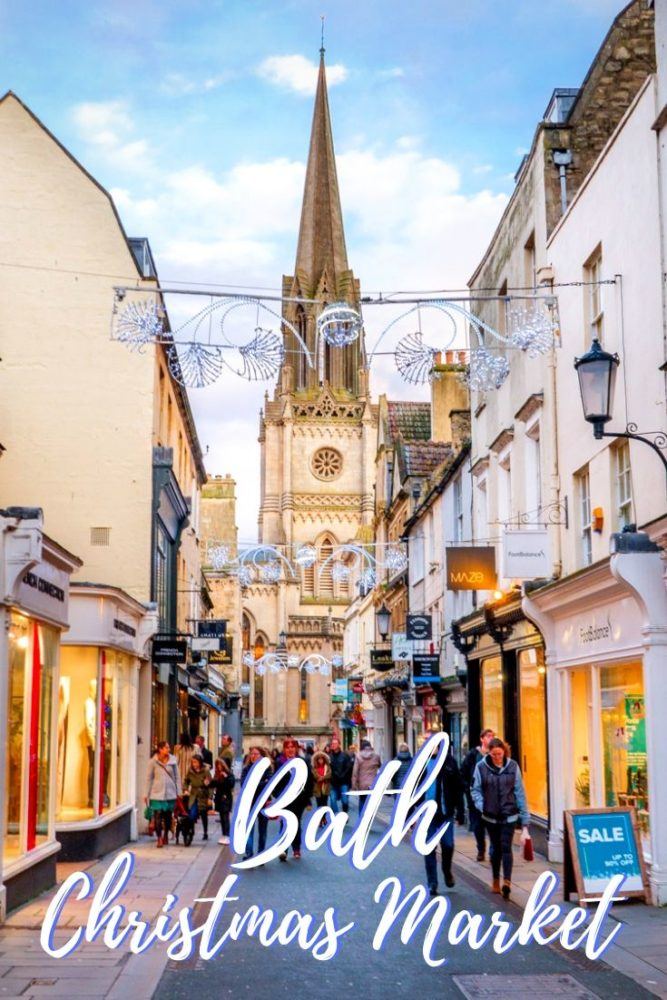 Bath is beautiful, and I know you understand our love of Christmas markets :)