Austin, Texas, is known for lots of things—live music, SXSW, the University of Texas, and lots of fun things that “keep Austin weird.” At the top of the list of the city’s quirky attractions is Chicken Shit Bingo, a fixture in North Austin for over 20 years. The weekly tradition brings together locals and visitors from across the city for an afternoon of fun.

What is Chicken Shit Bingo?

The game is straightforward. For four hours almost every Sunday, crowds gather at The Little Longhorn Saloon to watch chickens poop on numbered squares. If the number on the square matches your ticket, you win.

But that’s just the basics. There’s also music, fun, camaraderie, and lots of anticipation surrounding the unusual game, which is what keeps people coming back week after week.

What to Know About Chicken Shit Bingo

The idea behind the bingo game is simple, but, if you’ve never played before, it’s hard to know what to expect. Here are a few things to know before you go.

Bingo is for everyone

While the name may be decidedly PG-13, the bingo crowd is made up of people of all ages from all walks of life. You’ll see children and grandparents, cowboys and hipsters, college kids and soccer moms, and everyone in between. There are always plenty of regulars and lots of first-timers, too.

Things move at the pace of the chicken

Everything at Chicken Shit Bingo happens based on the chicken’s timing. The chickens eat and…um, processes the food based on their own timetable. Sometimes a “result” takes just a few minutes. Other times, you may find yourself checking your watch and wondering what could be taking so long.

See more fun things to do in Austin.

You spend a lot of time watching a chicken’s butt

It seems obvious—chicken shit is closely related to chicken butts. And, yet, I hadn’t anticipated just how much time we would spend watching a chicken’s butt and waiting for it to do its business.

It’s a mildly disconcerting realization to have.

The crowd shouts and cheers in swells as if they were going over the steep parts of a roller coaster any time it seems that the chicken is ready to make its mark. It might be the most unusual part of this already unusual Austin experience.

There is live music

The Little Longhorn Saloon is part of what makes Austin the “live music capital of the world.” With musical acts ranging from honky-tonk to folk, the bar hosts more than 10 bands a week. That’s over 600 in a year.

On Sundays, you’ll find the band playing alongside the action and encouraging people to dance in between bingo rounds. It’s a fun addition to the events.

The ticket price is a donation

Basic tickets are a $2 donation and golden tickets are a $5 donation, all of which goes into the pot for the winnings. Whatever you do, don’t call it a “bet.”

Events may be outside

The Little Longhorn Saloon is a cozy dive bar. Great for music, two stepping, and a few beers. Less great for the crowds that come for bingo.

When it’s warm, most of the bingo activities happen outside, which means weather can be an unexpected factor in your visit. There are tents and fans, but that’s not always enough to combat the heat, especially when there may be a lot of time between the rounds of bingo.

There are typically four rounds of bingo.

The Little Longhorn Saloon is located at 5434 Burnet Rd., about 10 minutes from downtown. 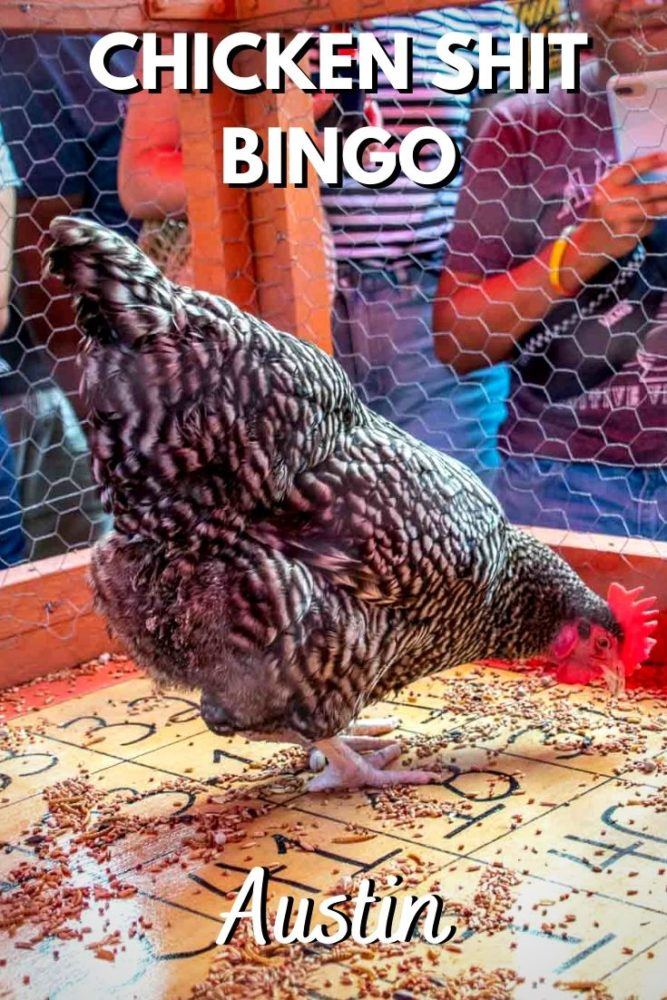 I have been to Texas but never Austin. I will make sure I go and participate in this chicken shit bingo. It seems to me to be some kind of fun. Thank you for everything to do and to keep us informed. Elie