Greykjavik, as the locals call it. This is drab, ugly, cloudy Reykjavik. The world’s northern-most capital city only sees daylight for three hours a day in the winter. It’s a dreary and depressing place. Or is it? On the sides of buildings and walls throughout the capital city, the Reykjavik street art scene is going strong.

There’s color to be found as the drab city reveals its inner self: fun, passionate, and caring about the broader world. The city itself becomes an ever-changing tapestry…and the locals are very proud of their creations.

Being from Philadelphia, the city generally regarded as founding the street art wall mural style (a full decade before they were seen in New York City), we are well versed in the urban arts. The city of Philadelphia is home to over 3,600 full-wall murals, and an estimated 250,000 smaller works. What our hometown has in quantity, Reykjavik has in quality.

The breadth and complexity of the Reykjavik wall murals is something we hadn’t expected. Join us on our journey exploring the best of Reykjavik’s street art scene.

These kinds of works are often temporary. Many of the murals and projects depicted here may be already been altered, destroyed, or painted over by the time you visit. Where possible, we attempt to attribute the work to the muralist(s).

If you read anything about street art in Reykjavik, you’ll likely see references to the famous Iceland Airwaves/Urban Nation collaboration known as Wall Poetry in 2015 and 2016 (more on this later). Many articles on the local scene seem to start the discussion of urban Icelandic arts here. It’s almost as if there wasn’t any street art in Iceland before that point. Not true.

Decades after the explosion of graffiti on buildings in our hometown of Philadelphia, teens and young adults in the Icelandic capital discovered the joys of the spray can and the power the image. The graffiti and tagging culture that is the precursor to urban mural art took hold in Iceland in the early 1990s.

Throughout the 1990s and early 2000s, most of the street art examples to be found in Reykjavik were common tagging and building graffiti. This style started to evolve in the Miklabraut Road underpass leading to Klambratún Park (as it is called locally, Hlíðargöngin).

Here, tagging evolved using the the angular lightning style popular in Europe and elsewhere, before taking more literal/murlaistic techniques.  [Much of this work reminds us of the alleys of Toronto or Ecuador.]

By the time we first visited Iceland in 2009, the scene was firmly established. There were dozens of street art murals littered throughout downtown, many of exceptional quality and most located along or just off the main drag, Laugavegur street.

By 2012, these works were so firmly entrenched in Icelandic culture, that when stenciled murals started showing up along the south coast, people assumed the famous British artist Banksy was in the country. Whether there really are murals by Banksy in Iceland (or just very good fakes), is still a matter of popular discussion.

There is at least one Icelandic Banksy mural: it was given as a gift by the artist to hang in the Reykjavik mayor’s office. Somehow that gift ended up in the living room of the now former mayor (Jón Gnarr) and caused a major controversy when it appeared to have been stolen from the citizens by the ousted mayor. Political intrigue is the same everywhere in the world.

In the lead up to the financial crisis in Iceland, street art cartoons were extremely common. These were whimsical, playful images on non-serious subjects. During the Iceland banking crisis, many of the cartoons (particularly along Lindargata street) were edited and took on a harsher, more critical tone…often immediately before the buildings were destroyed to make way for luxury high-rise buildings.

In the aftermath of the crisis, the edgy style has fallen away and more peaceful, business-friendly projects have taken their places. These days, exploring the street art murals is one of the top things to do in Reykjavik.

The natural world features heavily in the art on the Reykjavik streets. In a country filled with tremendous natural beauty, it is no surprise that the artists would turn to these natural elements for their beautiful creations. Common themes are bald eagles, wolves, fish, flowers and other natural elements. These naturalistic themes can be found on walls throughout Iceland, including the street art of Hellissandur and Ólafsfjörður.

These same themes reminded us strongly of similar works in Vancouver.

A handful of modern mural paintings focus on human achievements, often with an eye towards social justice issues. The rights of women and climate change are popular mural topics in the city.

The Wall Poetry in Reykjavik project was hardly the origins of street murals, however, it was an important turning point for the medium. Wall Poetry brought murals larger than anything seen before to the Icelandic capital.

The Iceland Airwaves music festival, held every November in Reykjavik, is one of the world’s most popular music festivals. Dozens of bands fill the agenda of the multi-day festival, that draws tens of thousands of visitors from around the world. And many of them fly to Iceland on Icelandair, the founder and sponsor of the festival.

In 2015, Iceland Airwaves and Icelandair partnered with the German collaborative Urban Nation to bring Berlin to Reykjavik. The two-year project (2015 and again in 2016) brought semi-famous muralists from around the world to Reykjavik to create large-scale murals.

The international artists were paired with a musician from the festival to create a work, the result being dubbed Wall Poetry. The Wall Poetry effectively visually translates or amplifies the auditory experience of the artist. A musical playlist was created to allow visitors to experience both the mural and music together.

However, in a move that irritated/angered many in Iceland, Urban Nation excluded all Iceland artists from participating. As a result, some of the works have spelling errors in the Icelandic language and some of the content/themes seem foreign or bizarre to locals.

Looking back, at the best, the Wall Poetry project seemed a bit ‘tone deaf’ in its approach. At worst, the project came at a time when the wounds over the banking crisis between Iceland and the rest of the Europe were still raw, and this only reinforced a marginalization of Icelanders.

But who are the artists that create these dazzling works?

In most cities around the world, murals come from the underground–people on the fray of society. But as street art has mainstreamed and become broadly accepted, it could be anyone.

Many of the artists go by edgy and secretive names, like Ugly Bros or RWS or Selur (which sounds way cooler than Örn Tönsberg). But despite the mystery, many of these people are surprisingly approachable.

There are mainstream artists and business owners who enjoy sharing their creations with the people of the city. Professional mural artists from around the world have been brought in for Wall Poetry. And you still see local kids beautifying electrical boxes.

Here are additional examples we discovered on the streets of Iceland’s capital city. When it comes to Reykjavik, the best murals and the best graffiti can generally be found closer to the water, both in downtown and near the harbor. 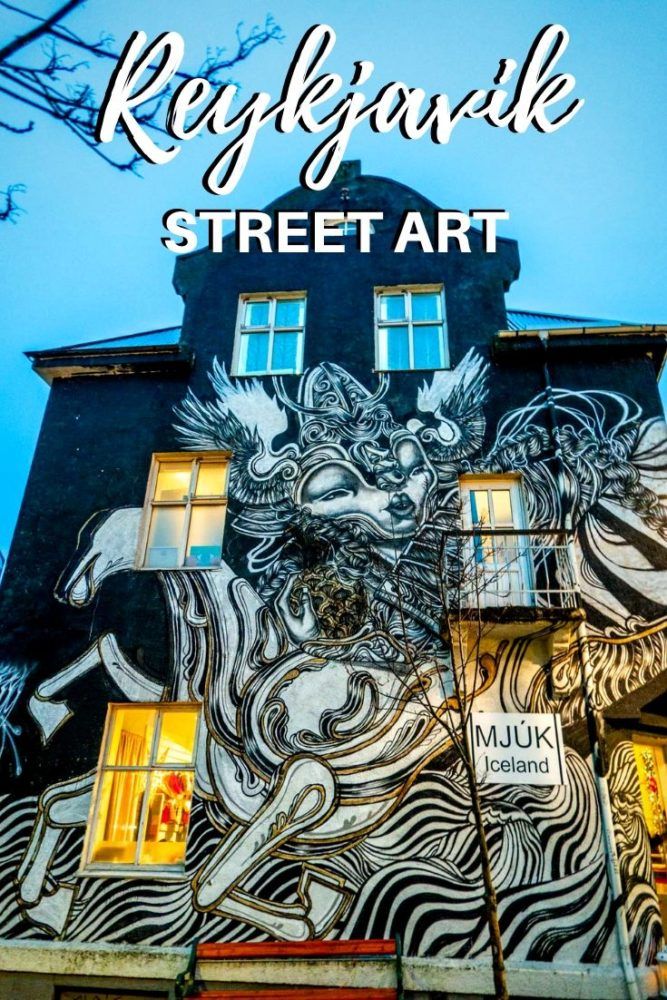