Moonshine and North Carolina have a long and storied history together. Distilling began at Old Salem in the 18th century and within 150 years evolved into a clandestine (sometimes lethal) activity on the wrong side of the law. Even after Prohibition ended in 1933, North Carolina stayed dry. Set on continuing the money making, moonshiners with fast cars were also determined to outrun the sheriffs, ultimately giving rise to the roots of NASCAR. This history is front and center in many of the North Carolina distilleries now.

For over a decade, the craft brewing and wine industries in North Carolina have been bursting at the seams. Now, the craft distilling industry is beginning to catch up. Almost all the distilleries in North Carolina have opened in the last 15 years, and the pace is increasing with new places opening all the time. Many follow the moonshine route (sometimes with historic family recipes), making white whiskey and often pairing it with fruit flavorings. Others explore different spirits, such as rum, brandies, and aged whiskeys. And this time, it’s legal.

These five North Carolina distilleries—each with its own unique story—offer tours and tastings.

In an industrial space on the banks of the Yadkin River, Call Family Distillers features elements of the old and the new. From the family’s history, you’ll see old stills and equipment and even Willie Clay’s blue 1961 Chrysler that used to run nightly loads of moonshine.

On the new end of things are the 1000-gallon pine mash barrels built by the Calls and the 2100-gallon still named “the Bull” in honor of Willie Clay. Also a mix of old and new is the product being made here – the four flavors of “Willie Clay Call’s Uncatchable” moonshine are original, cherry, strawberry, and apple pie. Each use the Call family recipe with direct steam distillation, where steam is inserted directly into the mash. A cinnamon liqueur is also available.

Tour/Tasting: There are two tour options for $5 or $10; consult the website for hours
Location: 1611 Industrial Dr. in Wilkesboro

Moonshine and Main Street have not historically gone together in North Carolina. But they do today at the Copper Barrel Distillery in North Wilkesboro. The facility is about as far away as you can get from the covert, backwoods stills one usually associates with moonshine.

The shell of the Copper Barrel Distillery was once a furniture factory, but Nance built the inside from the ground up. Drawing on nearly 60 years of experience, he constructed the still, ran the pipes, and carefully watches over each batch of moonshine with humor and precision.

From the purity of the water used to the best way to taste the final product, no detail is overlooked. There are even plans to add a mill to grind the grain used in the mash, which will give the Copper Barrel control over as much of the process as possible. In the future, the same degree of attention will be applied to other products, including fruit brandies and aged whiskey. During a tasting, you can sometimes try other moonshine flavors like caramel apple, cotton candy, or others before they’re available to the public.

It’s not every day that you walk into a distillery and find the owner wearing a floor-length fake beard, or a lab coat, or a wide variety of interesting hats. But Mayberry Spirits is no ordinary distillery and Vann McCoy is certainly no ordinary owner.

McCoy, part of a long tradition of moonshiners, made his first batch at the age of 13. But after high school and college, he took the unexpected path of joining the Cistercian Order of monks for over 20 years. Though he was around brewing, distilling, and wine-making in the European monasteries where he served, McCoy never pursued the craft until he returned home to North Carolina to care for his aging mother. But since coming back to Mount Airy, McCoy’s focus has been on opening the town’s first legal distillery since Prohibition, Mayberry Spirits.

The beard and other accessories he wears are part of the energetic and educational tour McCoy gives up to 12 times each weekend as he takes visitors on a walk through the history of North Carolina distilling up to the present day.

And the fun certainly doesn’t stop with the tour, as visitors get to try three varieties of whiskey – Crystal Moon, a white whiskey with a tequila-like flavor; Toasted Oak, a variety crafted in charred oak barrels with toasted oak chips; and Toasted Vanilla, which combines Toasted Oak with a homemade vanilla extract. All the products are made in small batches using sweet sorghum syrup distilled in handcrafted copper stills. A growing line of gourmet extracts, which are based on the alcohol, are also available.

In a former tobacco warehouse in Arts District in Winston-Salem, Broad Branch Distillery produces aged, grain-forward spirits. The distillery uses primarily North Carolina ingredients and grinds its own grains, overseeing every part of the process that results in their premium whiskeys and other spirits with nuanced flavors. With a 30-year background in the wine industry, owner John Fragakis has married his expertise with the best skills of friends, relatives, and distilling experts to carefully craft Broad Branch’s unique offerings.

Broad Branch began in 2014 with Nightlab 1.0, a white whiskey based on a 150-year-old distilling tradition passed down by Frank Williams who closely advises the distillery. That was followed by Smashing Violet, a unique North Carolina blueberry-infused whiskey with just a hint of natural sweetness. Both have garnered rave reviews.

Tour/Tasting: Tours are $10; see the Broad Branch website for information about dates and times
Location: 756 N. Trade Street in Winston-Salem

Muddy River Distillery in Belmont is both one of the first North Carolina distilleries and the oldest legal rum distiller in the state. Started essentially as a hobby, Robbie and Caroline Delaney opened up shop on the banks of the “muddy” Catawba River. By 2013, it was clear that just working on the project on the weekends could no longer meet the demand. The Delaneys renovated a 6100-square-foot space in an old textile mill to house the distillery, built two new stills, and made the leap to full-time distilling.

Today, the distillery handles every step of the rum-making process. By overseeing everything from fermentation to bottling, their goal is to produce a sweet, smooth rum that’s “the best damn rum you’ll ever taste.” And, on a tour of their facility, you’ll have an opportunity to do just that.

Muddy River Distillery offers six products. Silver Carolina Rum is the flagship product. Queen Charlotte’s Reserve is aged for one year in charred American white oak barrels, for a lightly oaky finish, and the Reserve version is aged for four years. Coconut Carolina Rum (my favorite) has a fresh coconut flavor and reminds me of Malibu without being quite as sweet. The Spiced Carolina Rum, with flavors of vanilla and spices, is like Christmas in a glass and would be sure to warm you up on a cold day. The Basil Carolina Rum works great in mojitos. All the products are available for sampling and purchase at the distillery.

Tour/Tasting: Tours and tastings are $8; check the website for information about hours and reservations
Location: 1500 River Dr. in Belmont

With the exception of Muddy River Distillery, we were the guests of the companies mentioned. All opinions of the potent and smooth are our own. 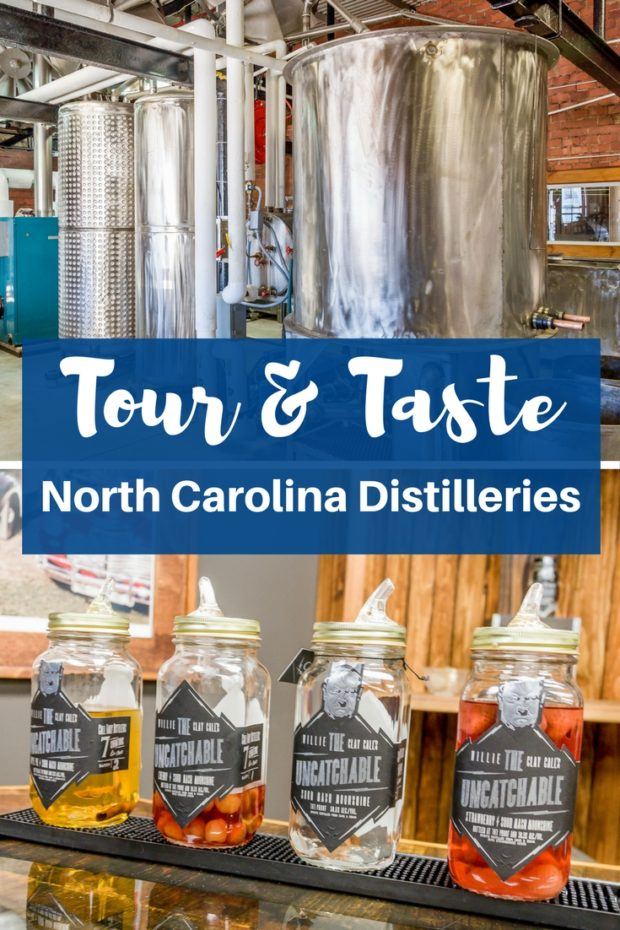 I had to read this, as I live in NC now and love distilleries. We just visited a Gin distiller in Durham and came away with a bottle and some tonic sugar as a result, lol. I've passed through Mt. Airy a few times and will have to get back to that area for the Mayberry distiller.

Thanks for sharing this, Laura. I'm happy to meet another blogger/writer from the area.

Take care and hope to stay in touch!

No mention of Gambill Creek Distillers, right down the road from Copper Barrel and Call, still in Wilkes county? The first legal 'moonshine' made here, and by far the better!

Thanks for stopping by, Jeff. Gambill Creek Distillers doesn't offer tours and tastings.