Budapest’s Seventh District, Erzsébetváros, is full of culture and history. At night, it buzzes with action from its many ruin pubs, restaurants, and other cool hangouts. During the day, it’s easier to see the area’s roots as the Budapest Jewish Quarter where visitors don yarmulkes and cover bare shoulders to enter synagogues that are over 100 years old and pay tribute at moving memorials.

On our first trip to Budapest almost two years ago, we explored the Communist history of this complex city. A return visit allowed us to dig deeper into its Jewish history with a walking tour of some of its main sites.

The Great Synagogue (aka Dohany Street Synagogue) is the central attraction of Budapest’s Jewish Quarter. For one thing, it’s impossible to miss.

The largest synagogue in Europe and the second-largest in the world, its enormous twin towers reach over 140 feet in height, soaring above the surrounding buildings. It’s also exquisite, with its striped, Moorish-style exterior and distinctive domes. Its importance goes way beyond its physical appearance, though. Since its completion in 1859, the Dohany Street Synagogue has been a center of worship for Neolog Jews.

During World War II, the synagogue also functioned as a detention area for Jews during the German occupation, and many victims of the war now rest just outside its walls. After damage sustained during the war, Budapest’s Great Synagogue was restored with the help of American actor Tony Curtis whose father was a Hungarian Jew.

Just behind the Dohány Street Synagogue, Raoul Wallenberg Memorial Park pays tribute to those whose lives were lost during the Holocaust and to the people who risked everything to save Jews in need.

The park is named after Raoul Wallenberg, a Swedish consul credited with saving tens of thousands of Jews by providing Swedish documents and shelter in buildings he had designated as Swedish territory. The park also honors Carl Lutz, Giorgio Perlasca, and others whose efforts helped save many. It features a striking stained glass panel and a plaque commemorating the “righteous gentiles.”

The second section of Raoul Wallenberg Memorial Park is home to the Tree of Life. Designed by Imre Varga, a Hungarian sculptor, the branches on the Tree of Life are made of thousands of tiny, metal leaves representing Hungarian Jews who died. Every leaf has the name of a victim inscribed on it. It’s impossible to leave this place without a sense of the enormous impact the Holocaust had on Hungary.

The understated Carl Lutz memorial stands on Dob utca, the entrance to the former Jewish ghetto. The bronze statue shows a man in the sky dropping a flowing curtain to a man on the ground below. The plaque nearby reads, “He who saves but one man is as if he had saved the whole world.”

This moving monument honors the Swiss ambassador Carl Lutz whose efforts saved over 62,000 Jews during the Holocaust. By setting up safe houses that he declared Swiss property and providing protective documents and fake passports to help people escape, he protected many. It is estimated that half of the Hungarian Jews who survived the war did so thanks to his help.

Built in 1872, the Rumbach Street Synagogue was once home to the Status Quo Jews, a group that sought an alternative between the old ways of the Orthodox Jews and the forward-thinking Neologs. The yellow building in the Budapest Jewish Quarter was designed in the Moorish style with minaret towers, making it easy to spot. Today, it is no longer an active place of worship. While it fell into disrepair for some time, renovations are ongoing, and the property will serve as a museum.

Throughout the Budapest Jewish quarter, you may notice small gold plaques dotting the sidewalks. These tiny memorials are generally just in front of the front doors of old buildings. The etched letters give the names of those who used to live here and died in the Holocaust. Though they’re much less grand than some other memorials in the Seventh District, their presence gives an important reminder of the number of people who were lost.

If you didn’t know it was a house of worship, it would be easy to walk by the Kazinczy Street Synagogue without even noticing. The façade is all brick, and although there are a few little Art Nouveau flourishes, it doesn’t stand out from the outside like some of the other synagogues in the Quarter.

Completed in 1913, the Kazinczy Street Synagogue is considered the center of the Orthodox Jewish community in Budapest and is part of a complex that includes a school, a communal hall, and a mikveh (ritual bath). The modest interior is a beautiful blue shade with small floral symbols that look more like folk art than something you’d expect to see in a temple. It is less touristy than the Dohany Street Synagogue, making it worth a visit.

Lest you think a Budapest Jewish Quarter tour is all about history, it’s also important to try the food! Stop by Café Noe to sample owner Rachel’s traditional Jewish flodni, a delicious cake with poppy seeds, apples, walnuts, plums, and other tasty layers.

Beyond its many historical sites, District VII is probably most well-known for being the heart of the ruin bar district. These fun pubs are generally dilapidated buildings that are given a new life with fun decor and a good menu.

Many of them–like Szimpla Kert, the original ruin bar–also serve as gathering places. They host markets, put on movie nights, and are valued community spaces where you can get a quick dinner and an affordable beer in an unusual setting. We love visiting Szimpla and the others and visit as many as we can on each trip to Budapest.

Mazel Tov is another of the most popular ruin bars in Budapest. With its bright courtyard and white lights, it feels a little more like a garden party spot and is less edgy than some of the other options, but it’s just as much fun.

Mazel Tov specializes in Israeli fusion cuisine, so you’ll find lots of great street food, including falafel, shawarma, and our favorite, shakshuka. Wash it down with a Hungarian rose wine for a delicious meal between your sightseeing adventures.

Jewish history in Budapest is by no means limited to the Seventh District. Two important sites lie about a mile away in the direction of the city’s spectacular Parliament building.

The monument in Liberty Square, which is “dedicated to the victims of the German occupation,” has stirred up much controversy within the city. Many believe that the imagery depicts Hungary as an innocent victim of Germany, distancing Hungary from the role its own citizens played during the Holocaust.

Visitors often leave mementos and testimonials about loved ones who were killed due to the actions of fellow Hungarians, particularly members of the Arrow Cross, Hungary’s national socialist party that collaborated with the Nazis.

Shoes on the Danube

Possibly the most moving – and one of the most photographed – Budapest sites is the haunting Shoes on the Danube. During the rule of the Arrow Cross, thousands of Jews were murdered on the banks of the river. Upwards of 10,000 people were led to the river’s edge and told to remove their shoes. They were shot and swept away by the freezing Danube. The 60 pairs of iron shoes that dot the water’s edge now are a tribute to those who died here.

Our tour of Budapest’s Jewish landmarks was courtesy of JayWay Travel, specialists in custom tour packages across destinations in Central and Eastern Europe. All opinions of the historic and cultural are our own. 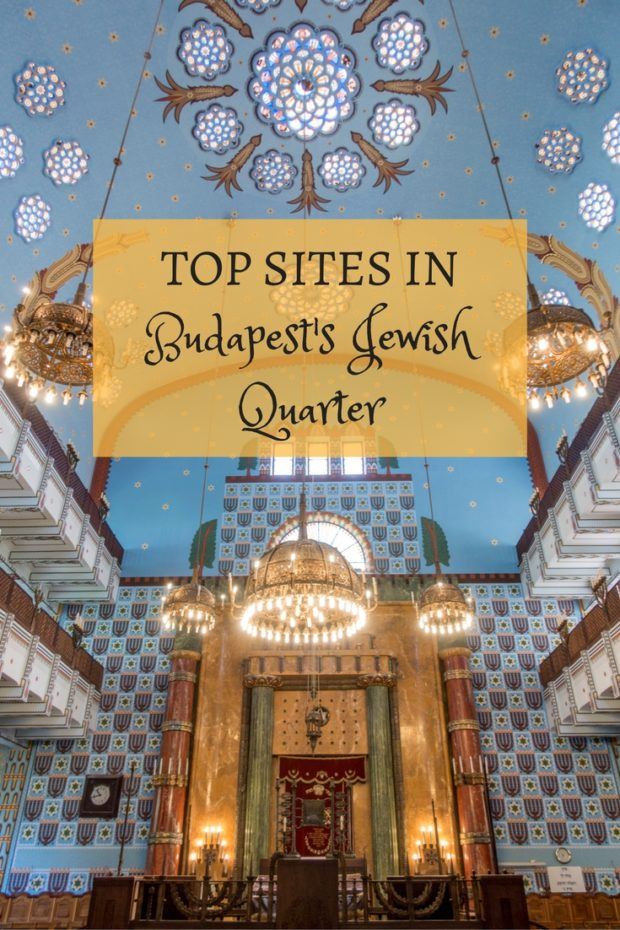 The landmarks and displays are beautifully crafted, makes me wanna visit it too! Great article by the way.