This small country has received a lot of love in the travel sphere during the last decade, and with good reason. Thanks to its stunning landscapes and ease of getting there from both North America and Europe, this is the perfect destination for trips both short and long. But when is the best time to visit Iceland?

While we’ve been visiting Iceland (and writing about it) since 2009, we don’t know if we can really claim credit for the tourism boom. What we can do, is give you expert advice based on our visits over the years during the different seasons.

During your planning, if you’re not sure when to visit Iceland, this guide is for you. No doubt you have some ideas about what to do during your perfect Iceland getaway. We have broken down for you month-by-month what to expect, so you can make an informed decision on the best time of year to visit, based on your interests.

Our Recommendation:  The Best Time to Travel to Iceland

We are often asked when is the best time to visit Iceland.  And while this is largely a matter of personal preference and based on your desired activities and attractions to visit, there are some general guidelines.

Iceland in the summer can be absolutely magical. The extremely long days mean you have more time for sightseeing, hiking, hot springs, whale watching, and about everything else under the sun. You will miss the snow, skiing, and Northern Lights, but rewarded for it in other ways.

You will also have crowds and a lot more tourists to compete with. If you are going to Iceland in summer, head out of populated Reykjavik and spend time in the northern and eastern parts of the country, where there are fewer tourists. We recommend “shoulder season”:  May/June or September where the weather is good, but slightly fewer people.

Iceland in the winter can be like a fairy tale. Only a few hours of actual daylight mean you’ll want to pack your activities close together. But the long twilight before sunrise and sunset create magical light (and stunning sunsets). Winter in Iceland can be beautiful.

The Christmas-to-New Year period can be very busy with lots of other tourists. But early December and January/February can give you that dose of cold, snow, and Northern Lights you desire.

If you want our advice for when to visit Iceland, there’s no bad option. However, the best option is the one that fits your personal travel style and what you want to do while you are there.

This month is the coldest it will get. Ski season is usually underway by this time. The temperatures are not unbearable, however, because daytime averages are -1° C (30° F). At times, you may encounter fairly strong winds, which will make these temperatures feel colder.

During January, the average amount of sunlight is only 4 hours, although this increases to almost 7 hours by the end of the month. And if the Aurora Borealis is on your list, you are in for a treat, as this the best time to travel to Iceland to see the dancing lights.

With the number of daylight hours stretching from 7 to 10, February brings average temperatures of 0° C (30° F). This leaves adequate opportunity for exploration of the incredible scenery, and most of the attractions in the southwest part of the country are open for business –unless there is a big snowstorm.

February is the best time for skiing. This is also a good month to see the Northern Lights; just be sure to choose an evening when there is no precipitation and no cloud cover for the most optimal viewing.

As the days get longer, the hours of sunlight with which explore range from 10 to 13.5. However, the average temperatures remain cold, but warming ever so slightly to 0.3° C (33° F). During March, about half of the days involve precipitation, which could be rain or snow, depending on where you are in elevation.

This is the heart of ski reason, although it starts to taper off by the end of the month.  Still, you will need a 4-wheel drive to get to the more remote areas. This is also another ideal month for catching the Northern Lights on clear nights.

April is where the country really begins to “heat up.” Ski season is usually over by mid-April. With average daytime temperatures at 2.8 C (37° F). This is the time of year when the country sees drier weather.

However, with the clear skies also come the end of the season to see the Northern lights. They may not be as spectacular as during the winter months, but they are still there in April. The amount of sunlight stretches to 16 hours.

With long stretches of daylight at about 18 hours per day, you will no doubt guess that this is not a good time to witness the Aurora Borealis. However, what you can enjoy are average daytime temperatures of 6.3° C (48° F) and fewer tourists.

While this is still on the chilly side, the bright side is that you have many more sunny days with which to play.

In the Northern Hemisphere, June holds the longest day of the year, and here it is 22 hours, the month of the midnight sun! Temperatures are climbing as well, with average daytime highs of 8.9° C (48° F) or even higher on sunny days. That means you can expect less wind and rain, and more sunny weather.

The roads through the interior usually open in late-June. The waterfalls are still going strong. The number of visitors start to increase significantly.

With pleasant weather and long days averaging 19 hours of sunlight, summer in Iceland can be quite lovely. The average daytime temperatures hover around 10.7° C (52° F) – never too warm. There is a good chance some light rain will mix in with sunny weather.

By July, you’ll be guaranteed that the 4-wheel drive roads into the interior will be open. This is peak season and many accommodation options will be booked out. Reservations will be necessary at restaurants.

This is when summer winds down and the daylight hours shorten to about 16. The average daytime temperature is 10.3° C (50° F), and the weather remains fairly dry. Towards the end of the month, you will start to feel a distinct chill in the air, but still plenty of daylight for exploring.

This is the best time to visit the remote interior since the roads will still be open. Many locals take camping vacations at the beginning of the month. The number of visitors are at their peak this month.

With the coming of autumn, September sees about 13 hours of sunlight and daytime temperatures of a cool 7.5° C (46° F). The season for good Northern Lights viewing is starting to ramp up towards the end of the month. There are also fewer days of sunshine.

By mid-September, some of the 4-wheel drive roads into the interior will begin to close for the winter. It is possible to start seeing some snow in the interior or at higher elevations.

In October, daylight hours drop significantly to around 9, with average daytime temperatures hovering at 4.3° C (40° F) and great autumn colors. Even though precipitation increases during this time, clear skies bring increasing chances for seeing the Aurora Borealis after the sun goes down.

While the weather is still good, there are significantly fewer people. This is a good “shoulder season” month: good weather, fewer crowds.

This time of year, temperatures drop to a bone-chilling 1.3° C (35° F). Now, just 6 hours of average daylight temperatures are available, but even though the days are short, this is prime Northern Lights-watching season. On many days you will see light rain or snow; even fog.

Other than January, this month is the darkest of the year, with only about 4 hours of daytime light to play with. Ski season usually starts in mid-December (or early January).  The Blue Lagoon sees the fewest crowds in early December.  Average daytime temperatures linger around -0.1° C (31° F).

On the flip side, this is prime fodder for some great Northern Lights viewing, when it is not snowing or raining, that is.

The Best Time to Go to Iceland by Activity

Not all activities are available here all the time. Depending on what you want to do, you may need to adjust your travel plans. Here is when to go to Iceland based on what activities are popular.

This is one of the premiere locations on the planet to view the Northern Lights, thanks to its remote location away from any city light pollution (save for Reykjavik). The season for Northern Lights lasts from late September through mid-April, however there are conditions required to get the best view. The sky must be clear and solar flares on the surface of the sun must occur, which produces the dancing lights.

During mid-November through about mid-March is when the temperatures are at their lowest. This is the optimal time for exploring the stunning ice caves. Due to the many glaciers and volcanoes, this is ripe territory for the formation of the ice caves. Also known as the Crystal Caves, you can take an ice cave tour and go inside the glaciers. Since most ice caves are inside glaciers, it is generally not safe to visit them during the summer months.

Waterfalls mean water, so the best time to catch waterfalls at their best is during the months of late April through June (with the heaviest rainfall) or anytime during the Spring-Summer months after a heavy rainfall. Also, there will be fewer crowds during this time.

Along with the Northern Lights, this island is a world-class spot for incredible whale watching. Optimal times for catching the whales in action is mid-June through the first week of September, however sightings do happen anywhere from April through October. Tours are available at several places around the island, including Reykjavik as well as the “whale capital” of Husavik in the north.

For the most pleasant mild weather, come to Iceland during the high season of July and August. With not quite as much daylight as in June, the days are still long, with the most sunshine and chance to explore the stunning landscape and all the attractions on the island.

If you are looking to save some dollars, travel in the low season of late October through early December, and then again from mid-January through March. Avoid the holiday season as this is when prices skyrocket. However, if you’d also like the weather to be a bit warmer, the shoulder season is good: mid-May through mid-June, and September through mid-October.

If you’d prefer your visit to be relatively uncrowded, the best time to plan your trip is during the months of March, April, May and September. Many people consider the shoulder seasons of spring and fall as the best time to visit.

Having said that, the capital of Reykjavik always sees its fair share of visitors, so to simply venture away from the city to more remote areas is ideal. The west fjords, northern and the east see far fewer visitors.

Icelanders celebrate some unique holidays all their own, and also some traditional ones (in a unique way!) Here are the highlights:

Have you visited before? What where your impressions? When is the best time to visit Iceland? 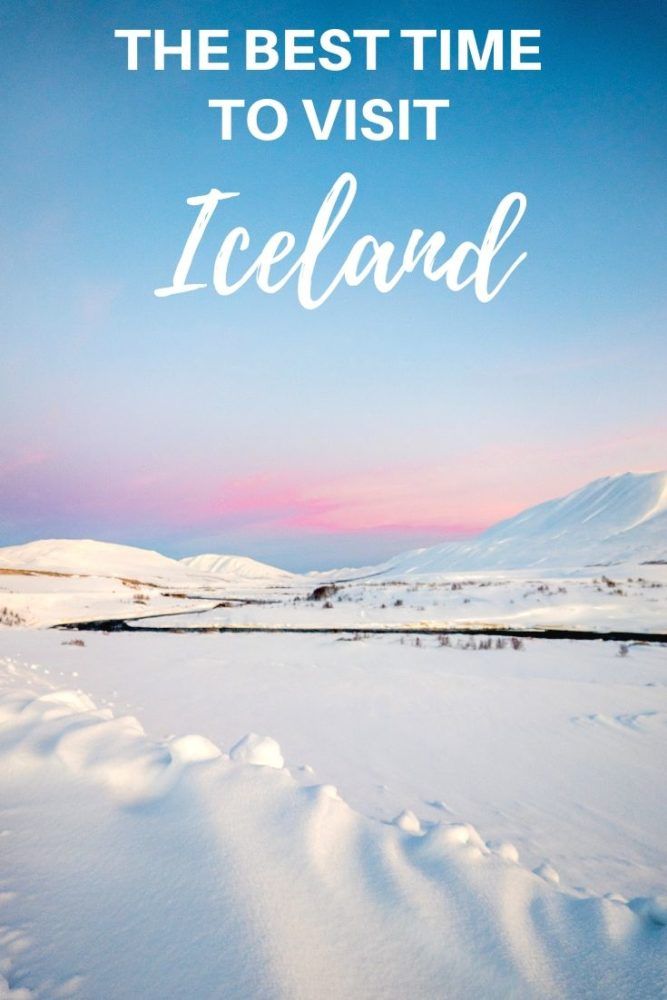