The history of distilled spirits in Tennessee is a long one. For well over a century, moonshiners have been making the good stuff in the hills, dodging the long arm of the law, and passing their recipes down through the generations. Building on that heritage, today’s Nashville distilleries come in all shapes and sizes.

Some distilleries in Nashville thrive on innovation, making uncommon flavors and blends to keep customers coming back. Others draw on proven family recipes and strong Tennessee pride to make the best whiskey (and more) this part of the South has ever seen. Either way, there are a lot of great spirits to try and fun distilleries to visit on a trip to Nashville.

Corsair Distillery is always pushing the envelope in craft spirits. Founded by childhood friends Darek Bell and Andrew Webber, the Nashville distillery has grown tremendously over the last decade, and we’re always happy when we see their whiskey on the shelf across the US and abroad.

Constantly innovating and trying new things, Corsair has one of the broadest product lines we’ve seen in a craft distillery anywhere, with more than 25 spirits on offer at different times of the year.

Corsair has traditional spirits from gin to at least seven types of whiskey. They’re also known for their more adventurous products like Pumpkin Spice Moonshine, absinthe, and vanilla bean vodka. But what really persuaded us to visit Corsair Distillery was their unique genever, a gin-like spirit that we first discovered on a trip to Amsterdam, where genever has been made for over 400 years.

Known for experimentation and crafting a damn fine cocktail, Corsair Distillery’s award-winning products are available at their two Nashville distilleries, their Kentucky location, and around the US. A tour here is a fun date night idea. See their website for information or just stop in for a sip.

History is at the heart of Nelson’s Green Brier Distillery in Nashville. Brothers Andy and Charlie Nelson have resurrected the family whiskey business that was once located in nearby Greenbrier, Tennessee, before the days of Prohibition.

In the late 1880s, Andy and Charlie’s great-great-great grandfather Charles Nelson was even more popular than Jack Daniel, making the top-selling Tennessee whiskey in the world. Charles passed away in 1891, and his wife Louisa took over. She ran the business successfully for nearly 20 years, but Prohibition put an end to the family’s good fortunes.

One hundred years after the first Nelson distillery closed, Andy and Charlie re-formed the family business based on the original recipes that made it so popular. The history and family pride is evident in everything about the distillery.

Nelson’s Green Brier Distillery offers tours and tastings at their warehouse and distillery on Clinton Street where you can even see some of the original bottles from the 1880s.

Ole Smoky Distillery in Nashville isn’t just a distillery—it’s an experience. The location at 6th & Peabody is 30,000 square feet, including Ole Smoky and Yee-Haw Brewing Co. in addition to a taco shop and a food truck featuring local favorite Prince’s Hot Chicken. With live music, indoor and outdoor spaces, and sports games on the giant movie screen, you could practically spend all day here.

The focus during my visit was the offerings at Ole Smoky, which bills itself as the leading craft distiller in the US. Drawing on the heritage of the moonshiners in the Smoky Mountains, Ole Smoky makes a cornucopia of over 40 types of brightly-colored moonshine and flavored whiskeys from a 100-year-old recipe.

Many of Ole Smoky’s dozens of flavors are available for tasting at the large bar. I opted for the full tasting, which included 8 moonshines (one was a surprisingly good moonshine-soaked pickle) and 2 flavored whiskeys along with a Yee Haw beer. Although it sounds like a huge amount of alcohol, the tastings are 1-2 sips each, so it’s not over-the-top.

Ole Smoky is a place for people who are looking for a casual, fun time. Don’t expect to discuss mash bills, angel’s share, or how long a product is aged. Just lean in and try the apple pie moonshine (there’s a reason it’s the most popular) or the salty caramel whiskey. Many flavors are also available in cocktails at the bar.

Established in 2011, Pennington Distilling Co. is located in Nashville’s Nations neighborhood. The grain-to-glass distillery has aged and clear spirits along with other products.

We loved their Davidson Reserve Tennessee Whiskey, which is filtered through maple charcoal and aged a minimum of four years. With flavors of caramel and toasted marshmallows, it’s the first locally distilled small batch Tennessee whiskey, a point of pride in a town that takes its whiskey very seriously.

Pennington’s flagship brand Whisper Creek Tennessee Sipping Cream goes well beyond the expected. The cream liqueur combines the characteristics of Tennessee whiskey with caramel, molasses, and pecan favors. Think Bailey’s meets Jack Daniel’s…if that delicious concoction were 40 proof. Even its bottle is unique, combining the look of a classic whiskey jug and an old-fashioned milk bottle.

Tours and tastings at Pennington Distilling Co. are offered Thursday through Sunday.

Nashville Craft Distillery is a laid-back place to sample some familiar spirits and try a few you may not have had before. Whether you take a tour, have a tasting, or stop in for a cocktail, the staff will tell you everything you want to know about the products, which is great for people like me who want to know all the details.

Founder and distiller Bruce Boeko—a former DNA lab director—shifted his scientific focus from biology to the slightly more fun fermentation and distilling, opening Nashville Craft in 2016. Along with distiller Rachael Sykes, he has created a portfolio of interesting spirits and liqueurs.

Everything at Nashville Craft Distillery is made from scratch. Whether they’re made from sorghum, honey, or grain, the small-batch spirits all start in-house with a focus on local and regional ingredients.

Naked Biscuit and Golden Biscuit (the barrel-aged version of Naked) are smooth sorghum spirits that you can try straight or in a cocktail. The gin and whiskey offerings are also excellent. My favorite product was the spiced honey liqueur, which tastes just like it sounds with a hint of sweetness and the flavors of fall.

One of the oldest Nashville distilleries, for over 20 years, Prichard’s Distillery has produced small batches of spirits using techniques that have been in the family for hundreds of years. Every step of the process from fermentation to bottling takes place on-site under the direction of the master distiller. Prichard’s takes pride in using quality ingredients, whether for their rum that uses molasses from Louisiana or their innovative Double Chocolate Bourbon, which incorporates elements from local Nashville chocolatier Olive & Sinclair.

Prichard’s second location (the original is in Kelso, Tennessee) is at the 186-acre Fontanel complex, which also features dining, zip lining, and an outdoor music venue. Take a tour to see how they make their rums, whiskeys, and liqueurs. You can even make a weekend of it by booking a hotel and exploring everything Music City has to offer.

If you’re looking to venture a little farther, Lynchburg, Tennessee, is only about 90 minutes from Nashville. This tiny, dry town is the home of the top-selling American whiskey in the world—Jack Daniel’s. Every year, Lynchburg attracts over 300,000 visitors looking to see how Tennessee whiskey is made, making the distillery one of the top attractions in Tennessee.

At the Jack Daniel’s distillery, visitors can see how craftsmanship and attention to detail have built a fine brand and drinks that people around the world swear by. A distillery tour here is also a walk through the 150-year history of Jack Daniel—the man and his eponymous products.

On a distillery tour, you’ll see the grain, the distillation process, and the 10-foot stacks of sugar maple charcoal that help set Jack Daniel’s apart. All this is before the white whiskey gets its color and flavor from handcrafted toasted oak barrels built on-site.

There are several different tour options, and we chose the one that includes a tasting of the five core Jack Daniel’s products, including the Tennessee Whiskey, Tennessee Honey, and Gentleman Jack. It’s a an informative and entertaining tour even if you’re not a big whiskey drinker–we both came away as fans.

Cascade Hollow Distilling Co. is probably more familiar to most people at the makers of George Dickel Tennessee Whisky. Despite the enormous popularity of their products, a visit here doesn’t feel like a visit to a large corporation. Instead, it feels like a country cabin in the Tennessee hills. There is no cell reception or traffic—just great whiskey.

Just over an hour from Nashville, a tour at Cascade Hollow traces the story of George Dickel, a German immigrant who became a successful merchant and ultimately one of the top whiskey makers in the US. You’ll learn how his wife Augusta helped the company prosper after George died and the unique way it kept going despite Prohibition.

Today, Cascade Hollow prides itself on its products that are “handmade the hard way”—filtered with sugar maple charcoal that is burned and transported by hand in the hollow. You’ll learn about the process and see the fermentation and distilling as it happens at one of the top distilleries in Tennessee.

The hour-long tour ends with a tasting of four whiskies ranging from George Dickel No. 1—an unaged white corn whisky—to their high-end George Dickel Barrel Select, which is aged for at least 10 years. If you’re feeling brave, you can also try the variety aged in Tabasco barrels for a bit of a kick.

We were the guests of Jack Daniel’s. All opinions of the flavorful and barrel-aged are our own. 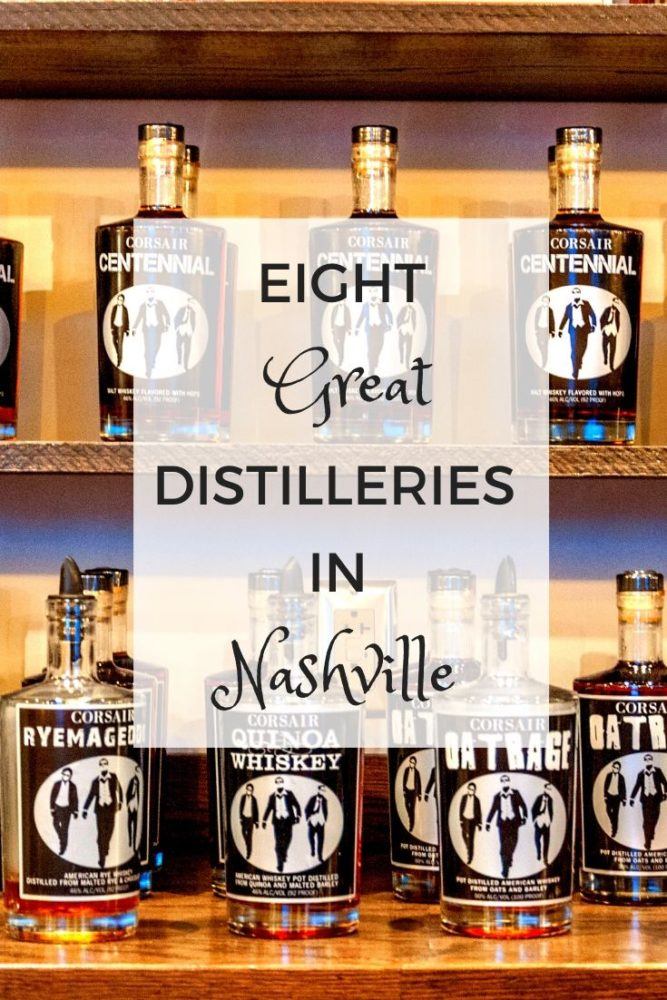 Honestly don't know how you didn't add Uncle Nearest distillery since you added Jack Daniels to this list??‍♀️

We would love to get there as soon as we can. Uncle Nearest not only makes excellent whiskey but has a great, historically important story. The distillery has existed for less than 2 years and has been closed for more than half that time, so it's made it impossible for us to visit yet. Hopefully we can make it on our next trip to Tennessee.

As a born-and-bred Tennessean—I grew up 15 minutes from Jack—you got everything right! You only missed one: George Dickel, which is actually tastier and just as historic as JD!

Well now I have something to add to my list for my next visit!

I do love whiskey. My first was getting to know the Scotch Whisky when I was in Edinburgh. Ever since, whisky (or whiskey) became my go-to drink! I've been to Nashville but not distilleries. I have to plan a trip!

It took us awhile to develop a taste for whiskey, but practice makes perfect :) And Nashville is a great place to practice!